The Story Behind TIME's Cover on Inequality in South Africa

The May 13, 2019, International cover of TIME examines South Africa as “the world’s most unequal country.” Depicting a topic as expansive as inequality in a single frame is a challenge, especially since unequal experiences are often lived adjacently, but separately. Photographer Johnny Miller has successfully achieved a method of visualizing inequality—by using a drone to spotlight from above how rich and poor can inhabit spaces that are right next to each other, but so different.

Miller’s drone work from South Africa proved to be the perfect fit for Aryn Baker’s cover story, providing a shockingly honest look at inequality in a way that is not visible from the ground. The cover image shows two neighborhoods outside of Johannesburg, with wealthy Primrose on the left and the informal settlement of Makause on the right.

Miller calls his visualization of inequality “Unequal Scenes,” and the project has expanded beyond South Africa, featuring bird’s-eye scenes of inequality from Baltimore, Mumbai, Mexico City, Nairobi and more.

About the project Miller says, “‘Unequal Scenes’ started in 2016 in Cape Town. I had studied the post-apartheid city (coursework at the University of Cape Town) during my master’s studies and was interested in how a drone could see the divides in the city a new way. South Africa was so ruthlessly and effectively segregated during apartheid, I just had an idea that by seeing it from the air it would help make that hit home. That the architecture itself is a dividing factor.”

“Unequal Scenes” has become almost a full-time undertaking for Miller. He’s planning to visit different parts of the world and hopes to grow the project by involving students, activists, other photographers––anyone interested in seeing the world from a different perspective. 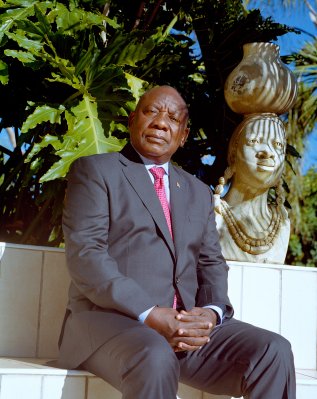 The President of South Africa on Finding That 'Mandela Magic' to Fix the Country
Next Up: Editor's Pick