What Happens Next with the Mueller Report? The Answer May Lie in the Footnotes

Ideas
By Asha Rangappa
Rangappa, a former FBI special agent, is director of admissions and a senior lecturer at Yale University’s Jackson Institute for Global Affairs.

If there’s one thing that lawyers know about reading documents, it’s to pay attention to the footnotes. In fact, oftentimes the most important information is buried there. America’s entire 14th Amendment jurisprudence, for instance, came out of a single footnote in a 1932 case now know as the “famous footnote.” The Mueller Report is no different. Buried in the footnotes of the Special Counsel’s two-volume tome are some of its most important nuggets, many of which address and refute popular talking points emanating from the Trump White House. Even if you don’t read the entire document, here are a few footnotes worth paying attention to — including one that seems to explain the possible results of Mueller’s findings. The devil is truly in the details.

This footnote addresses a question that has been raised time and again, and which was echoed by Attorney General William Barr in his testimony to Congress on April 10: What was the basis, or predicate, for the Russia investigation?

The White House has claimed that the investigation was based on the “Steele Dossier,” an intelligence report compiled by a former British spy and financed by the Clinton campaign and the Democratic National Committee (DNC), which alleged that there were ties between Trump and the Kremlin. But in this footnote, Mueller explains the sequence and timing of events that gave rise to a credible threat to national security, warranting an investigation. First, Mueller notes earlier in the report that in July 2016, Wikileaks began disseminating emails stolen from the DNC. A few days later, the U.S. intelligence community assessed with “high confidence” that the Russian government had orchestrated the hack of these emails. Within a week of that release, a foreign government informed the FBI that George Papadopoulos, a foreign policy advisor to the Trump campaign, told a representative of their government that Russia had offered to “assist the campaign through the anonymous release of information that would be damaging to Hillary Clinton.” Mueller states that this information “is contained in the case-opening document and related materials.” This means that it was these facts, not the Steele Dossier, which raised an open question on whether Russia had attempted or was trying to attempt to coordinate with members of the Trump campaign to influence the 2016 presidential campaign and led to the official opening of an investigation.

Here, Mueller explains that his team investigated whether the emails taken from the DNC would qualify as “stolen property,” as defined by the National Stolen Property Act. This has important implications for Mueller’s conclusions. Defining the hacked emails as stolen property could have increased the criminal liability of Wikileaks, which would have effectively acted as a “fence” — a legal term referring to a middleman who illegally receives and sells stolen goods. Further, if the hacked emails had qualified as “stolen property,” Paul Manafort, Donald Trump Jr. and Jared Kushner, who sought “dirt” on Hillary Clinton from the Russian government in the June 2016 Trump Tower meeting, may have had to meet a lower standard of intent and even potentially face a violation of a federal statute which prohibits knowingly receiving stolen property. But based on his legal analysis, Mueller concluded that current law defined “stolen property” only as “tangible goods,” which would not include intangible information stolen by an unauthorized use of a computer. (Though Mueller also notes that Congress has considered amending the relevant act to include such information in the definition.) Thus Manafort, Trump Jr. and Kushner had to meet the higher intent standard required for campaign finance violations — and Mueller found the evidence insufficient to meet that mark.

This is a critical footnote that addresses the question, Why wasn’t former Trump campaign advisor Carter Page charged with a crime, if a Foreign Intelligence Surveillance Court felt there was enough probable cause that he was acting as an agent for Russia to warrant monitoring his communications via a FISA order? In short, the report states that while there was enough evidence against Page to warrant a FISA order, Mueller’s office did not have sufficient evidence to meet the higher and more exacting standard to bring criminal charges that would likely result in a conviction for the same. This is because of the difference between counterintelligence investigations and criminal investigations. Specifically, because FISA orders are based on gathering foreign intelligence, not on gathering evidence of a crime, the probable cause standard is lower: it requires only a “fair probability,” rather than “certainty, or proof beyond a reasonable doubt, or [even] proof beyond a preponderance of the evidence” that the target is knowingly acting as an agent of a foreign power. That said, Mueller does note that the Foreign Intelligence Surveillance Court found that the evidence against Page met the lower probable cause requirement on four occasions.

Critics of the Mueller report have noted that much of the narrative, particularly on obstruction charges, cites news articles or publicly available information. Critics have concluded this means that Mueller was unable to unearth evidence on his own, and is therefore relying on the media to support his claims. This footnote makes clear the real reason why Mueller cited these reports so often. The report states that he “summarizes and cites news stories not for the truth of the information contained in the stories, but rather to place candidate Trump’s response to those stories in context.” In other words, the news stories in circulation at the time of Trump’s actions show what Trump knew had been publicly reported — which offers additional evidence for his frame of mind when he attempted to refute or conceal the evidence of Russian interference in the 2016 election underlying those stories. This helps to establish if there was “corrupt intent” behind Trump’s actions, a fundamental element in establishing whether he committed the crime of obstruction of justice.

On June 8, 2017, then FBI Director James Comey stated in his testimony to the Senate Select Intelligence Committee that information contained in the Steele Dossier was “salacious and unverified.” Comey’s words have since been interpreted as referring to the entirety of the raw intelligence provided in the Steele Dossier — and thereby tainting any portion of the investigation in which it might have been used. As noted above, there is no evidence that the Steele Dossier was used to open the investigation, and it’s not clear how much of the report, if any, was used to obtain things like FISA orders. But to whatever extent it was used, Mueller takes pains to note here that Comey’s testimony referred to a specific piece of the Steele Dossier, namely the “reporting’s unverified allegation that the Russians had compromising tapes of the President involving conduct when he was a private citizen during a 2013 trip to Moscow for the Miss Universe pageant.” This footnote makes clear that in his testimony, Comey was not characterizing any other portion of the dossier, other than those that refer to potentially compromising tapes on President Trump, as being “unverified.” This means that there may well have been portions of the Dossier that were verified early on in the Russia investigation (and much of it has been corroborated in public reporting since), and could have been a legitimate source of raw intelligence for the FBI in its investigation.

This footnote offers the nexus between Mueller’s investigation into Russian election interference and the investigation in the Southern District of New York into campaign finance violations by Michael Cohen and, potentially, Trump himself. In particular, Mueller states that he was authorized to investigate Essential Consultants, LLC, the shell company used to make a hush-money payment to Stormy Daniels, because he had evidence that “the entity received funds from Russian-backed entities.” This suggests that the Daniels payment was discovered in the course of following the money from Russia, and that the payment became evidence of a separate crime beyond Mueller’s jurisdiction that was then referred to an outside U.S. Attorney’s Office. This particular investigative thread opens the possibility that Mueller may have also followed Russian financial leads connected to Trump, including information contained in his tax returns (which the White House has said it assumes Mueller has seen).

This is perhaps the most consequential footnote in Mueller’s report. In this section, Mueller dismantles Trump’s lawyers’ argument that the president cannot, legally speaking, obstruct justice. It is here, while forcefully making the claim that Congress indeed can hold the president accountable for obstruction of justice, that Mueller adds a telling a footnote emphasizing that “[a] possibility remedy through impeachment for abuses of power would not substitute for potential criminal liability after a President leaves office.” What Mueller is saying here is that impeachment and criminal prosecution are independent processes which vindicate different interests. Therefore, even Congress removing Trump from office would not preclude the same evidence from being used in a criminal prosecution — which could result in a jail sentence for a former President of the United States. 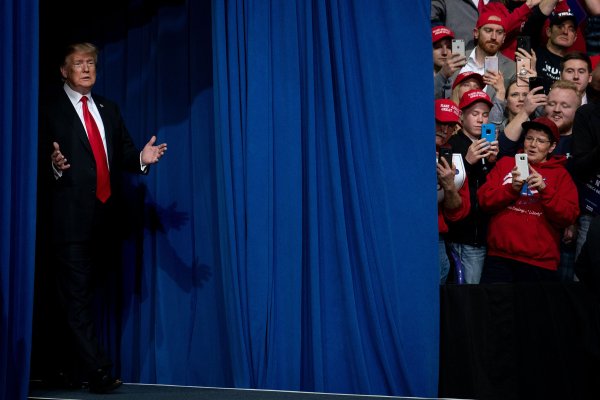 How Trump Is Using the Mueller Report to Reshape Washington's Balance of Power
Next Up: Editor's Pick