A Device That Heats Tobacco, But Doesn't Burn It, Can Now Be Sold in the U.S. Here's What to Know About IQOS

After a two-year wait, the Food and Drug Administration (FDA) on Tuesday green-lit the sale of a new gadget that heats tobacco instead of burning it.

The device, which is called IQOS (pronounced EYE-kose) and made by Philip Morris International, works by heating tobacco-filled sticks, called Heatsticks, to produce a nicotine-rich aerosol. The FDA’s decision means the device may now be marketed in the U.S. — but even though IQOS has been shown to produce fewer of the cancer-causing chemicals found in traditional cigarettes, the FDA has not yet approved a separate application to call IQOS a lower-risk alternative to cigarettes. It’s also not entirely clear whether IQOS will help smokers quit.

Philip Morris USA and its parent company Altria will sell IQOS in the U.S., according to a company release, and it will first be introduced in the Atlanta area in 90-120 days, an Altria representative told TIME. Specific pricing information is not available, but the spokesperson said it will be “priced to incent” adult smokers “who are looking for alternatives to cigarettes.”

Here’s what to know about the IQOS device — and why some public-health advocates are concerned that teens will illegally use it.

How does IQOS work?

Traditional combustible cigarettes produce smoke when tobacco is burned at high temperatures. By contrast, the FDA says the pen-like IQOS device heats, but does not burn, “tobacco-filled sticks” wrapped in paper, creating an aerosol that contains nicotine. Marlboro, an Altria brand, will make the tobacco sticks used inside the cartridge, which will come in menthol and unflavored versions.

Is IQOS safer than cigarettes?

The FDA has yet to make a ruling on that question, so it’s too soon to say. While the FDA says that levels of cancer-causing chemicals found in cigarette smoke, including acrolein and formaldehyde, are lower in IQOS’ aerosol, “it does not mean these products are safe. All tobacco products are potentially harmful and addictive and those who do not use tobacco products should continue not to,” the FDA said in its release.

Erin Calipari, an assistant professor of pharmacology at the Vanderbilt University School of Medicine, says it’s important to cut down on harmful byproducts of smoking, but it’s also important to remember that nicotine is an addictive drug on its own, and is not without risks.

“Nicotine is a stimulant. Stimulants have effects on the brain, and they have cardiovascular effects as well,” Calipari says. “We make a huge deal about the tar and the byproducts in cigarettes, but the drug addiction is incredibly important as well. Just because this minimizes other aversive outcomes doesn’t mean it’s safe.”

Maybe — but that doesn’t necessarily mean it will be good for public health, says Dr. Michael Siegel, a professor of community health sciences at the Boston University School of Public Health.

“If there was no such thing as e-cigarettes and this just came onto the market, it would be a step forward,” Siegel says. “The problem is that we now have electronic cigarettes, a non-tobacco product that is intended to do the same thing.”

While e-cigarettes may come with their own risks — some early research has linked them to heart problems, respiratory disease and DNA damage — and their long-term effects aren’t known, Siegel says they have a safety edge compared to IQOS since they don’t contain tobacco. (E-cigs produce an aerosol by heating and vaporizing a liquid that usually contains nicotine.) So while IQOS could theoretically be good for public health if it helps cigarette smokers quit outright, it could do damage if it draws current or former smokers away from e-cigarettes and back to tobacco, Siegel says.

E-cigs “are not absolutely safe, but they’re moving in the right direction,” he says. “I don’t see IQOS as helping that cause.”

Dr. Jonathan Avery, an addiction psychiatrist at NewYork-Presbyterian—Weill Cornell Medical Center, says the market doesn’t need another cigarette-mimicking device. “There are plenty of good, FDA-approved [smoking cessation] treatments,” Avery says, including nicotine-replacement gum, patches and drugs. “I can’t see how adding more of these devices is going to make a significant impact on adult smoking.”

Is youth use a concern?

Though they’re only legally available to adults, e-cigarettes have grown popular among teenagers, sparking concerns that they’ll get kids hooked on nicotine. In response, the FDA has cracked down on e-cig sales and marketing to keep them out of kids’ hands. (Altria invested $12.8 billion in the most popular e-cig brand, Juul, last year.)

But IQOS will probably not be as popular among teens, the FDA says, since it does not come in fruity or sweet flavors and will have a relatively high price point. Data out of Italy and Japan, where the device is already for sale for the equivalent of about $70, also suggests that it’s not popular among youth and non-smokers, the FDA says. But to be safe, the FDA will require that IQOS advertisements are targeted toward adults, and will prohibit television and radio advertising.

Siegel agrees with the FDA’s assessment. But Avery, who has treated kids addicted to vaping, says he fears the same thing will happen with IQOS.

“Kids like flashy, new things,” Avery says. “I can’t imagine that adolescents, who are increasingly in the market of using these new devices, are not going to turn to this one as well, which contains the same addictive product that we worry about.” 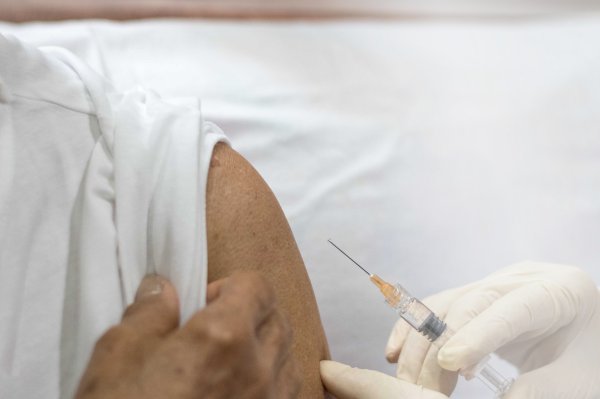 How to Tell If You Need a Measles Booster Shot
Next Up: Editor's Pick