April 29, 1919, a spring day in Atlanta. Housekeeper Ethel Williams received the morning’s mail for her employer, former Senator Thomas Hardwick. There was a parcel, which she opened.

The explosion took off her hands.

Mrs. Hardwick, standing nearby, also suffered severe burns. This outrage made news across the country.

The previous day, a similar device had been delivered to Mayor Ole Hanson of Seattle. Fortunately, Hanson’s clerk who opened the parcel held it the wrong way up, and the bomb failed to detonate. He discovered the chemical vials inside and realized what it was. Authorities began frantically searching for other such devices. In all, 36 parcels were traced and intercepted. The targets included U.S. Supreme Court Justice Oliver Wendell Holmes Jr., U.S. Attorney General A. Mitchell Palmer, John D. Rockefeller Sr., and J. P. Morgan Jr., cabinet members, mayors, state legislators and captains of industry. The bombs were intended to be delivered on May Day — International Workers Day — and the mechanism was designed to detonate when the parcels were opened.

On April 30, the Evening World ran an extra edition that, under the headline “NATION-WIDE TERRORIST PLOT,” described the “infernal machines” as part of a conspiracy.

There were no notes or demands with the bombs. Anarchists of the time believed in the “propaganda of the deed,” that bombings and assassinations were messages in themselves. But one of the intended recipients of a parcel bomb was Rayme Weston Finch, an otherwise little-known agent with the Bureau of Investigation who had the previous year arrested two followers of the anarchist Luigi Galleani. The decision to include Finch, hardly a figure of national importance, quickly led the investigators to focus on Galleani’s group. They were unable to pin the crime on a particular individual, but anti-Anarchist laws of the time meant they didn’t really need to: political sympathies were enough.

The fallout from this incident would ripple onwards, with further bombing campaigns through the summer and harsher responses from law enforcement, encouraged by public fear of random violence. As well as inducing more repressive policies, the period would help to cement anti-leftist attitudes in the US, and help make “socialism” an unacceptable political idea for decades.

Luigi Galleani was a major figure in the American anarchist movement. He spent his whole life fomenting various anarchist rebellions. Born in Italy, he dropped out of university to pursue political activism in France — while the police pursued him. After a 20-year career of sedition charges, deportations and imprisonment across Europe for his political activities, Galleani arrived in the United States in 1901. He lost no time in getting involved in the same kind of politics in the U.S., particularly among the Italian immigrant community. He settled in Vermont and founded the Cronaca Sovversiva (Subversive Chronicle), an anarchist paper. He also published booklets offering not only political views, but also instructions on how to make bombs.

He was the inspiration, if not directly the instigator, of many anarchist attacks in the U.S. “Galleanists,” as his followers became known, had committed various acts of outrage before the 1919 parcel attacks — not all bomb-related. One, in Chicago, had attempted to poison the guests at a society banquet by putting arsenic in the soup.

The fact that anarchism by its nature was a decentralized movement made it difficult to prove direct links to Galleani. But his talent as an orator seemed to inspire devotees to follow his call. In February 1919, he gave a rousing speech in Taunton, Mass. — and the following day four admirers attempted to bomb a nearby wool mill where the workers were on strike. Unfortunately for them, they had more enthusiasm than skill, and only killed themselves.

Hot on the heels of the mail bombs came more violence associated with anarchists, including riots at May Day celebrations. In Boston, a police officer was stabbed to death. Tempers were running high among the activist left as Eugene Debs had gone to prison only two weeks before. Debs was the best-known socialist in the country, who had been a candidate for President four times (and would run a fifth time, from prison). In Cleveland, a brawl between Socialists and Victory Loan workers left two dead and 40 injured. At the time, anarchists were a challenge to law enforcement everywhere. The ideology of their various decentralized groups was amorphous and many “anarchist” attackers were disaffected young men who would today be called “self-radicalized.” They followed no master and belonged to no organization.

But the U.S. had recently passed the Immigration Act of 1918, which included tougher measures to allow deportation of political subversives. Partly intended as a means of dealing with enemy sympathizers during the war, it was flexible enough to apply to all kinds of political undesirables. Following the April mail bombs, authorities sprang into action, rounding up known subversives, as well as those directly linked to the attack. (Luigi Galleani was himself deported in June 1919, but not for direct involvement in any bombings.)

This was only the beginning of a tug-of-war between anarchists and the U.S. government, which would unfold into the first Red Scare.

The Russian Revolution of 1917 (and the civil war that was still ongoing) struck fear into governments all over the world. Fresh from the chaos of the First World War, they did not want to have to deal with domestic uprisings from radical leftists. “Socialism” became a dirty word, and was used as a way to discredit and undermine leftist groups. In the United States, concern that immigrants were bringing violent political activism with them led to harsh crackdowns focused on particularly Eastern and Southern Europeans.

There would be further bombs, strikes and race riots. Various groups of the left, including many who would not associate themselves with anarchists, became linked in the public mind with violence and outrage. Socialist, Bolshevist, anarchist, whatever — they were presented as a public threat. It was a threat that the U.S. government responded to with urgency, deporting activists and criminals alike. Though it wasn’t what the Galleanists would have wanted, the 1919 mail bombs had indeed sent a message. 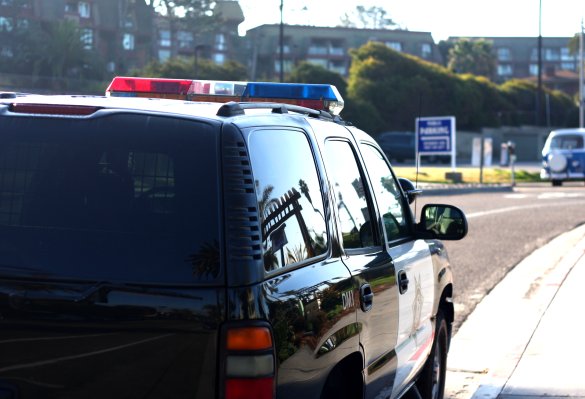 Woman Holding a Gun and a Baby Threatens a San Diego Church
Next Up: Editor's Pick