Why Munchausen Syndrome by Proxy Is Having a Moment on TV

Munchausen syndrome by proxy is having an unexpected moment—at least on television. The medical disorder, which manifests when a person “acts as if an individual he or she is caring for has a physical or mental illness when the person is not really sick,” according to the Cleveland Clinic, has appeared in a number of shows and movies in recent years. It has anchored the twists of HBO’s thriller series Sharp Objects and Paul Thomas Anderson’s 2017 film Phantom Thread. European shows, including The Bridge and the BBC Three’s Clique, have also included Munchausen in their plots.

The rise in the depiction of the disorder arrives at a moment when an increasing number of types of mental illnesses are being portrayed on television, and even familiar diagnoses are being portrayed in more nuanced ways. Characters on several highly acclaimed shows have reckoned with mental health issues: Crazy Ex-Girlfriend‘s Rebecca (Rachel Bloom) navigated life with Borderline Personality Disorder; on Girls, Lena Dunham’s Hannah Horvath lived with Obsessive Compulsive Disorder; and Aya Cash gave viewers a brutally honest look at clinical depression as Gretchen on You’re the Worst.

Munchausen syndrome by proxy is different from these conditions in that it involves the abuse of someone else, typically a person who is trustful of their caregiver. Its official diagnosis is “Factitious disorder imposed on another,” and though the term “Munchausen by proxy” carries controversy in the medical community, the condition is widely known by the latter term. Most recently, the disorder and its often tragic effects were dramatized in The Act, a Hulu series that takes on one of the most significant and sensational real-life cases of the disorder.

The series, which recently concluded, tells the true story of Dee Dee Blanchard and her daughter Gypsy, played by Patricia Arquette and Joey King, respectively. Gypsy was thought to have a litany of illnesses, some of which required her to use a wheelchair. Using her child to garner sympathy and charitable donations, Dee Dee used the medical knowledge she’d picked up through prior experience working as a nurse’s aide to convince others that she knew what was right for her daughter’s care. Gypsy grew up believing she was ill, until she discovered, at 19, that she was not actually sick at all. Before that point, Gypsy’s attempts to rebel against her mother were quashed by Dee Dee. Their life together and the lies upon which it was based came to a brutal end in 2015, when Dee Dee was killed by Gypsy’s then-boyfriend in a murder plotted by the couple.

The Blanchards’ story has become a flashpoint for interest over Munchausen syndrome by proxy, which has historically been diagnosed predominantly in mothers. Caregivers with the condition “intentionally harm or describe non-existent symptoms in their children to get the attention given to the family of someone who is sick,” according to the Cleveland Clinic. A 2017 study looking at nearly 800 published cases of Munchausen syndrome by proxy found that about 95% of the time, a victim’s abuser was their mother.

Dr. Marc Feldman, a psychiatrist and an expert on Munchausen who has studied it for about three decades, says the way Munchausen syndrome by proxy can upend countless lives makes for compelling television, particularly amid a boom in popularity for true crime stories.

Indeed, the portrayal of women — and thus far on TV, it’s been mostly women portrayed as having the disorder — forcing those under their care to swallow poison, take unnecessary medications or have unnecessary surgeries can be totally engrossing, if difficult to bear. It’s hard to forget Patricia Clarkson’s Adora fixing a cocktail of poisoned milk to give her daughters in Sharp Objects, much like the image of Arquette’s Dee Dee forcing King’s Gypsy to use a feeding tube she does not need in The Act. According to Feldman, these portrayals have remained fairly faithful to how the disorder actually plays out in real life because it’s “not a complex thing to define” and therefore easy to dramatize.

Mothers have been found to perpetrate most Munchausen syndrome by proxy cases because women are more likely to be the primary caregivers to their children, so they have more opportunity to carry out the abuse undetected, according to Feldman.

“It’s not considered weird for mothers to bring the child for healthcare interventions. They can get away with it for longer, and sometimes indefinitely,” he says.

Feldman says he’s found in his research that in many families in which Munchausen syndrome by proxy cases are diagnosed, traditional values along gendered lines — where fathers are breadwinners and mothers handle childcare — are upheld more rigidly. He’s seen several examples of the condition in families where fathers are oblivious to what’s going on between their wives and their children.

Munchausen syndrome by proxy corrupts the concept of motherhood, according to Feldman, who says that people who are given a diagnosis typically have some other personality disorder and a longtime pattern of using maladaptive methods to meet their needs. “It’s a caricature of mothering. These perpetrators come across as being heroic, indefatigable, devoted to their children,” Feldman says. “Doctors are presented as incompetent, because mother knows best. There’s a thread of duplicity running through all of their behaviors.”

Elizabeth Podnieks, a professor of English at Ryerson University whose research has centered on motherhood and pop culture, tells TIME that the rise of the portrayal of Munchausen syndrome by proxy complicates a longtime dichotomy that figures mothers as either bad or good, but nothing in between. Using the disorder to tell stories allows viewers to look at characters who take on “two sides of the same coin.”

“We have a woman who’s trying to make her child sick. The child is then, therefore, in desperate need of a mother’s care, allowing her to showcase that she’s the embodiment of the maternal figure that women are expected to be,” she says.

In Podnieks’s view, the growing portrayal of Munchausen syndrome by proxy on TV coincides with the rise of anxieties surrounding motherhood. The concept of “intensive mothering,” in which the mother, held primarily responsible for child-rearing, adheres to a lifestyle that totally revolves around the child, has taken root even as more and more women join the workforce, she says. Developed by the sociologist Sharon Hays, the “intensive mothering” ideology puts extra pressure on working mothers to maintain unrealistic standards of parenting.

The growing occurrence of intensive forms of parenting (think of “tiger” or “helicopter” moms), and the consistent focus on mothers’ performance have led to a moment in which narratives about “bad moms” or caregivers who break away from their traditional roles attract viewers, according to Podnieks. She refers to the The Perfect Nanny, a 2018 novel based on a real 2012 murder case in which a nanny killed the children she was hired to look after, as another instance in which a mother might be judged — in this case, for making the decision to hire outside help. Mothers with Munchausen syndrome by proxy make for even better fodder for drama onscreen, she says, because they look perfect to the outside world, but a dark reality lies beneath.

“The Munchausen mother is the ultimate overprotective mother,” she says. “It feeds into that same idea of extreme kinds of parenting that might not be surprising given all the burdens and pressures that women still face.” 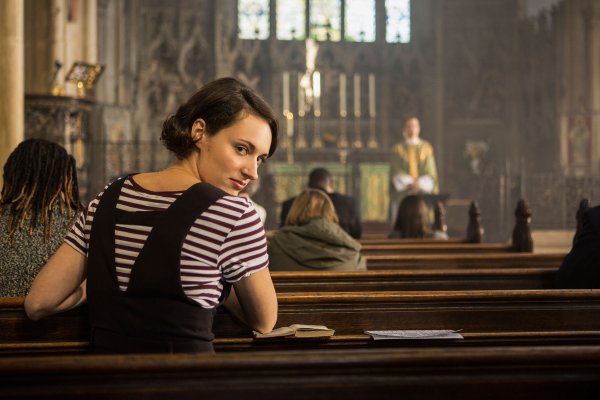 Fleabag Season 2 Is a Raunchy, Redemptive Masterpiece
Next Up: Editor's Pick