Here’s How Pikachu, Jigglypuff and 4 Other Pokémon Were Brought to Life in Detective Pikachu

Pikachu’s got a new fur coat. Detective Pikachu arrives in theaters Friday, marking Pokémon’s first foray into live-action. The film tells the story of a former Pokémon trainer (Justice Smith) who teams up with a talking Pikachu (voiced by Ryan Reynolds) to solve his father’s murder.

The film’s creative team faced a tall order in adapting the creatures of Pokémon in a way that would both satisfy fans of the cartoons and also look real onscreen. TIME traced that three-year process—you can read about it here.

In interviews, Erik Nordby, the visual effects supervisor, and Ravi Bansal, the art director for the film’s creatures, offered further insight into the specific challenges of transforming six Pokémon that appear prominently in the movie. Below are excerpts from those conversations.

Pikachu is the film’s titular hero and arguably the most famous and beloved Pokémon.

Ravi Bansal: We started off with various rodents, particularly rabbits. But the moment you made him rabbitlike, it made him less appealing. He soon became his own thing where you’re no longer referencing an original animal and just going, “Yeah, he ought to be fluffier here.”

Erik Nordby: There was a whole series of early tests: marsupials in general were hugely impactful in terms of how he should move. Sugar gliders too, in terms of how they maintain this very, very cute appearance with those large eyes.

The fur question was huge. The Pokémon Company wanted something that felt like a horse, like a very sheeny short fur that basically felt like no fur. But we felt that if it’s not furry, it would be the most disturbing thing in the world, because it would be this hard-surfaced yellow thing. If it’s going to have any sense of kawaii [the Japanese term for cuteness], there has to be a level of fur.

We started with very, very short and matted down fur like a pug’s. It ended up feeling greasy and oily. We settled on a hybrid between a coon cat, a pug dog and a red fox—and some spit polish as well.

Jigglypuff is a cuddly sphere that lulls its battle opponents to sleep by singing. In Detective Pikachu, Jigglypuff appears as a disgruntled lounge singer at a bar.

Bansal: In the first few weeks, we were scrapping for direction. We were shooting off in a lot of different directions, and we made some drawings that I quite enjoyed but will probably never see the light of day. We did a very paranoid Jigglypuff that I loved.

We put fur on Jigglypuff and sent it to the Pokémon Company, but they said that its body was actually much more like pigskin. We did a version of that—but it did look not particularly attractive or endearing. We added more and more fur.

Nordby: You’d think: “That’s simple—make a ball. Put some nubs on it.” But if we do that, it’ll feel like a balloon. So we took all of the time necessary to figure out that this is probably not an actual ball—it’s probably something that’s quite furry. The fur has been groomed into a ball, and underneath that there’s a substructure. For every Pokémon, there’s also the Pokémon underneath that.

Mr. Mime was part of the first generation of Pokémon. He serves as a slippery antagonist to Pikachu in this film.

Bansal: When Rob [Letterman, the film’s director] suggested using Mr. Mime, we asked the Pokémon Company, “What is he?” They went: We don’t know.” They were actually trying to dissuade us from using him, because they weren’t sure what he was or whether he’d work well on screen. That was a bit of a strange one.

Nordby: When you look at the character, it instantly feels creepy. We had to figure out what aspects we could push and pull. We settled on the idea that every surface needed to feel like a toy. His joints are those dodge balls we used to play with when we were kids. His gloves are the inflatable gloves you’d get at a fair. We had to find all of these evocative textures that just felt childlike.

His shape is so so simple: It’s a series of balls and very simple shapes. So you constantly look for little tiny things that have a high level of detail that can counterbalance that very simplistic overall silhouette. The adding of very subtle freckles is something we found was very successful—it also helped with it looking a bit more cute.

This ghost Pokémon appears in the film in an underground battle.

Nordby: When you read Gengar’s description, it gets right to the edge of being slightly scary. We developed a whole bunch of effects tests where all you would see were its red glowing eyes—and the body would form around those eyes. But we realized it was way too scary. We ended up finding something that felt more mischievous than scary.

The idea was to make something that felt extraordinarily liquid. We looked at a whole series of early tests that they did for the dementors in the Harry Potter movies—the flowing, cape-like aspect. We wanted to feel like it was something that could pay homage to that. We ended up shooting a lot of smoke on the day and trying to reverse it—but that didn’t turn out to be super helpful.

Loudred also appears in the battle sequence blasting music through its ears, which double as speakers. The character was introduced in the third generation in 2002.

Nordby: The big thing with Loudred is, where do we stick all the organs? When he opens his mouth it’s a vacuous hole: There’s little room for a brain or anything else. We didn’t want to overthink it, but at the same time, we were trying to keep something feels like it would feel real. That was a big challenge.

Lickitung has an enormous tongue and appears mostly for comic relief in the film.

Bansal: We interpreted his skin almost as marshmallow and dusted. We needed a dry surface to accentuate the slobberiness of his tongue.

Nordby: We built that tongue in reality with a big chunk of latex. It’s completely gross, but we had to have something to wipe Justice Smith’s face with [the actor gets licked by Lickitung in one scene].

For something to feel real, it has to have real world grit and texture. But the Pokémon Company would see that and think it was dirty. We had to walk them through a whole series of slides and build the trust that we weren’t going to make these things disturbingly dirty.

I wouldn’t say that [the scene with Lickitung] was the Pokémon Company’s favorite scene in the movie. That’s one where we got right up to the edge of what they would be comfortable with. 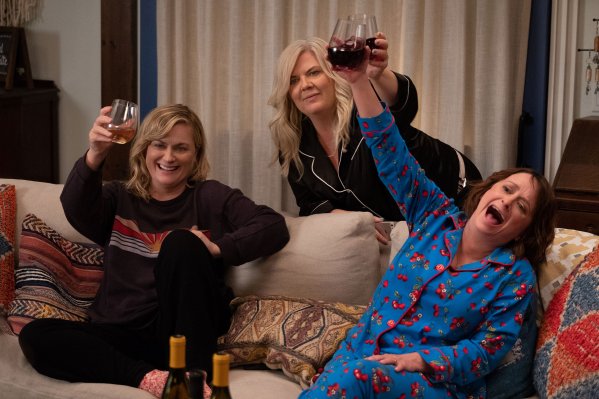 Amy Poehler's Wine Country Is Faintly Nutty, and a Bit on the Dry Side
Next Up: Editor's Pick