Theon Greyjoy finally got the chance to fully redeem himself for betraying the Starks back in season 2 of Game of Thrones when he was protecting Bran Stark as he waited out the Night King in the godswood during the Battle of Winterfell.

After fighting off a swarm of wights alongside his fellow ironborn defenders, Theon charged at the Night King in a last-ditch effort to save Bran from what seemed like a certain death. “You’re a good man,” Bran told Theon before he did, seemingly giving Theon the closure he needed to forgive himself for his past mistakes. “Thank you.”

Unfortunately, Theon was no match for the Night King, who avoided his spear before fatally running him through with it, killing Theon. But Theon’s sacrifice proved to be a helpful move as Arya managed to save Bran by stabbing the Night King with her Valyrian steel dagger moments later. Of course, that doesn’t make his death any less sad, especially when you factor in a promise that Theon made to Robb Stark way back in season one.

As was pointed out by Reddit user McConnells_Neck, Game of Thrones‘ second episode ever saw Robb assert that he wouldn’t hesitate to go to war with the Lannisters after Catelyn reveals that Bran didn’t fall from the tower, but was thrown. Theon immediately insists that he will stand behind Robb if it comes to that, prompting Maester Luwin to call them out for jumping the gun. “What, is there going to be a battle in the godswood?” he asks.

Guess that wasn’t such a crazy idea after all. 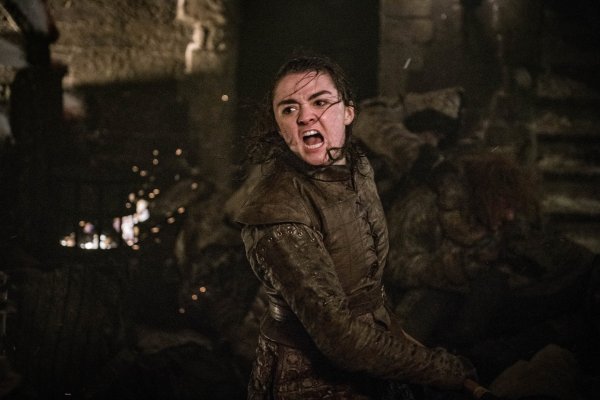 Let's All Witness Maisie Williams Silencing a Troll Who Doubts the Power of Arya Stark
Next Up: Editor's Pick