Girls reading Article 1, Freedom Of Speech, during the Bill of Rights ceremonies being held at City Hall in New York City, c. 1938
Underwood Archives/Getty Images
By Olivia B. Waxman

The United Nations recognizes May 3 as World Press Freedom Day, and this year’s theme is “Media for Democracy, Journalism, and Elections in Times of Disinformation” — a choice meant to encourage discussions of the challenges faced by the press today when it comes to reporting on elections.

Ours is not the first era to recognize the importance of a free press in a functioning democracy. In the United States, that acknowledgement dates back to practically the beginning, as the First Amendment to the U.S. Constitution, among its other guarantees, bars Congress from making any laws “abridging the freedom of speech, or of the press.”

But the meaning of those words has evolved — and, as it turns out, the modern idea of a free press is a newer innovation than it seems. For more on that, TIME spoke to Lee C. Bollinger, President of Columbia University and co-editor of the recently released The Free Speech Century, an anthology of essays on the First Amendment.

TIME: Why do we have the First Amendment?

BOLLINGER: In democracies, the idea is that sovereignty rests with the citizens. In order for that sovereignty to be exercised effectively, citizens have to be able to discuss things and do so freely without interference of the government. I think press freedom is intimately associated with that, and that’s very easy to understand if you start with that premise. The citizens can’t know everything they need to know about the government and you need institutions that are dedicated to trying to inform the people.

The Free Speech Century takes 1919 as its starting point. Why then?

It wasn’t until 1919 that the Supreme Court weighed in for the first time to say what this right expressed in the First Amendment really means. Why it began then is one of the mysteries and puzzles of U.S. history and history of the First Amendment. What we do know is that in World War I there was a rising sense of patriotism, as always happens in wars, and accompanying that was a really serious case of intolerance toward anyone who dissented. In 1919, there were several cases that had been part of this wave of intolerance around the country. Three of these cases — Schenck, Frohwerk and Debs — made it up to the Supreme Court, which unanimously rejected the claim that free speech had been violated. So it was an inauspicious start to the First Amendment as we know it today.

While the court didn’t reach a pro-free-speech result as we think of it today, an opinion by Justice Oliver Wendell Holmes said that the First Amendment protected speech against government intervention until there was a clear and present danger. The juries in those cases could find one, and that’s why they affirmed the convictions, but the standard took hold as a potentially strong statement about the First Amendment, in the sense that the government had a burden now to prove to juries and courts that there was a clear and present danger, otherwise they couldn’t suppress the speech. Holmes was then joined by a new justice, Louis Brandeis, and together they wrote, in a series of opinions, some of the most eloquent, powerful and persuasive defenses of freedom of speech and freedom of the press. While they were in dissent in those early years, in the 1920s, their view eventually carried the day.

What do you think the Framers would think about the relationship between the President of the United States and the press today?

It’s hard to know what the Framers thought, but if you take the sum of history of the U.S. you have to be really discouraged and deeply concerned about the way in which free speech and free press are being talked about today by many people in this society, but by the President in particular. There is always going to be unhappiness on both sides, because of the press not having access to information and the government feeling they don’t have the ability to function effectively. [But] it has reached a level of disrespect for the basic principles of free speech and free press that is alarming. There are many ways for a government to exercise censorship. One is to make a law, but there are many more subtle ways in which you can accomplish very similar forms of censorship. The attacking of the press, the inciting of intolerance in society toward other points of view and towards the press, is itself a form of censorship.

How has interpretation of the First Amendment evolved since 1919?

It had some mixed results through the ’50s. Sometimes the court was very protective of speech; sometimes it was very un-protective of speech. There are wonderful pro-free speech decisions in the ’30s, a few in the 1940s. The famous example in the 1950s involves the McCarthy era and the efforts of the government to prosecute people believed to have Communist views, so there’s a kind of up and down.

Then everything changed in the ’60s, in particular with New York Times v. Sullivan; that case held that a citizen cannot be sued for defamation or libel by a public official for falsehoods that the citizen may have expressed, unless the public official can show the citizen made those false statements knowingly or in reckless disregard of the truth. That was very important in establishing the right of citizens to criticize government officials. But what was most important was that it established a broad theory of free speech that was highly protective. So when I said people think we have the First Amendment because of sovereignty lying in the citizenry, that idea was expressed in New York Times v. Sullivan in a very eloquent way. And for the past 50 years, but only 50 years, we have had a robust principle of freedom of speech in the press. The jurisprudence and freedom of speech and press, as developed beginning with New York Times v. Sullivan, is one of the great public goods the U.S. has offered to the world.

What do you think lies ahead for the First Amendment?

There’s a view of the U.S. Constitution that it should be interpreted according to the original intent of the Framers, but the fact of the matter is, we know virtually very, very little about what the Framers thought these general terms should mean. The First Amendment says “Congress shall make no law… abridging the freedom of speech, or of the press.” That’s very, very general. What is the freedom of speech? I think they deliberately didn’t say because that has to be interpreted for each new generation. I think the only thing that the Framers would find distressing is if the whole project were abandoned. It’s our responsibility to continue developing this responsibly.

How are we going to deal with the new technologies of communications, the Internet and social media? Destructive speech is on social-media platforms. A decade ago, the same media were thought to be the final answer to an open marketplace of ideas, and the final realization of free speech because now everybody can speak. We have to understand the arguments for protecting [extremist speech] and we have to be open to the arguments against protecting. The Supreme Court has two decisions that meet diametrically opposite conclusions on this; in 1952, the Supreme Court said that Illinois could punish somebody for racist speech that happened in that case, and then in 1968, in Brandenburg v. Ohio, the Supreme Court reached a different result, saying a meeting of the Klan that included potential threats against blacks and Jews was protected speech. Brandenburg has sort of won the day, but that issue continues to be a matter of debate.

What should the takeaway be about the history of the First Amendment on World Press Freedom Day?

The questions about a global development of free-press norms we can live by is extremely important. The Khashoggi murder needs to be thought about not only as an international human-rights violation, but also as a direct First Amendment issue. Arguably he was murdered because of what he was saying in the Washington Post. He was an American resident protected by the First Amendment in what he was saying, and a foreign government allegedly brought about his murder because of those statements. Given the fact that we now have a more interconnected world economically, the world is much more integrated. We all live closer together and there are global issues that can only be decided on a global basis. 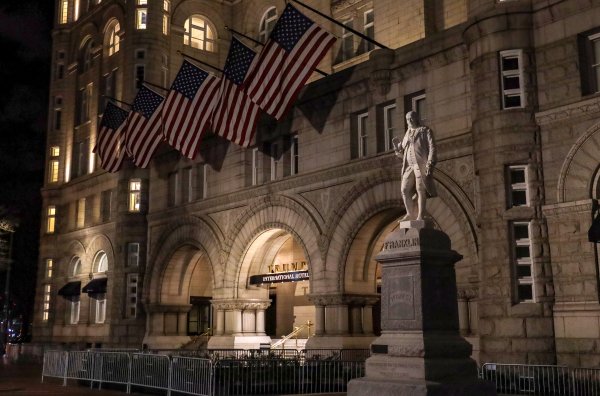 The Justice Department Suddenly Changed Its Mind About the Constitution to Defend Trump’s Businesses
Next Up: Editor's Pick