On Facebook, the Dead Will Eventually Outnumber the Living. What Does That Mean for Our Histories?

The dead will eventually outnumber the living on Facebook, according to a new study whose authors want us to think more about the importance of preserving our collective digital histories.

The phenomenon could take place within the next 50 years, though will likely take longer, according to a research paper from the University of Oxford Internet Institute published April 23 in the journal Big Data & Society. The study’s authors, Carl J. Öhman and David Watson, used a combination of data, including projected mortality and population rates from the U.N. as well as Facebook’s user growth over time. It may take a little longer than 50 years to reach the tipping point, the authors admit — that calculation assumes Facebook’s user growth stopped after 2018, but the company continues to grow. Still, it’s likely to happen “in the first decades of the 22nd century,” they say.

Öhman and Watson hope their work will serve as “an opportunity to respond with thoughtful and effective policy interventions” when it comes to handling what we leave behind online when we die, they wrote.

“The personal digital heritage left by the online dead are, or will at least become, part of our shared cultural digital heritage,” the authors wrote, “which may prove invaluable not only to future historians, but to future generations as part of their record and self-understanding.”

The researchers say they didn’t conduct the study as a critique of social media, but to begin a dialogue on digital estates and identity. “We wanted to bring in a more societal perspective and ask what the phenomenon of people dying on the internet means for us on a collective level,” Öhman told TIME in an email.

A Facebook spokesperson said that, while the company disagrees with the study’s predictions, it is aware of the larger issue. “We have a deep respect for our unique position in people’s lives and take our role in the conversation on building legacy in a digital age seriously,” the spokesperson told TIME in a statement.

Facebook has taken several measures to handle a user’s death. Once the company becomes aware of a user’s passing from a friend or family member contacting Facebook, their account becomes a special memorial-style page, according to the site’s help center. Facebook now has hundreds of thousands of memorialized accounts, the spokesperson said. “As Facebook and its family of apps and services continues to grow, we remain committed to supporting people coping with loss,” the spokesperson said.

Facebook is also working on the problem of having the profiles of living users’ deceased friends and family show up on the site in distressing or disturbing ways, like in the “suggested friends” feature or when sending event invitations. Facebook COO Sheryl Sandberg wrote in a press release on April 9 that the company hopes to remain “a place where the memory and spirit of our loved ones can be celebrated and live on.”

Like a kind of living will, Facebook users can plan in advance who can access their page in the event of their death. Users can also choose to have their account be deleted when they die. However, the feature isn’t available to minors, so parents who have lost children under 18 need to request access to their child’s account. To prevent anyone from abusing this feature and targeting someone who is still alive, the memorialization request process requires documentation — family members are asked to upload or provide a link to an obituary or other proof of death for verification before a team from Facebook reviews the request, according to the memorialization request form.

Instagram, which is owned by Facebook, also memorializes the profiles of deceased users upon requests from loved ones. But the accounts are then frozen — nobody can log in, the account won’t appear on Instagram’s “Explore” page, and its original privacy and visibility settings will remain. Twitter, meanwhile, only allows family members to request that a deceased user’s account be deleted.

Öhman and Watson are concerned with matters beyond a single individual’s digital history. Their paper opens with a quote from George Orwell’s 1984, which envisions a dystopian future with ubiquitous government surveillance and omnipotence. “We, the Party, control all records, and we control all memories,” the quote reads. “Then we control the past, do we not?”

1984 is a fitting comparison, Watson argues, because the sum of our individual histories make up a more significant societal history. “Control over the past is no small matter, and consolidating that power in a single firm or a small number of powerful companies is every bit as problematic as handing it over to a totalitarian government,” Watson told TIME in an email.

Öhman said their choice to include Orwell’s quote isn’t a judgment of Facebook, but a warning about what could happen if we’re not careful about who owns our collective histories. “We need to build the proper institutions and infrastructure to deal with these questions now,” Öhman told TIME in an email. Part of that work may include soliciting the help of historians, archivists and policy advocates, Watson says. He believes this problem is simply too big for Facebook to deal with on its own. “The idea that an American corporation trying to post quarterly profits could possibly be relied upon to handle the world’s digital legacy on its own is unrealistic,” Watson says. 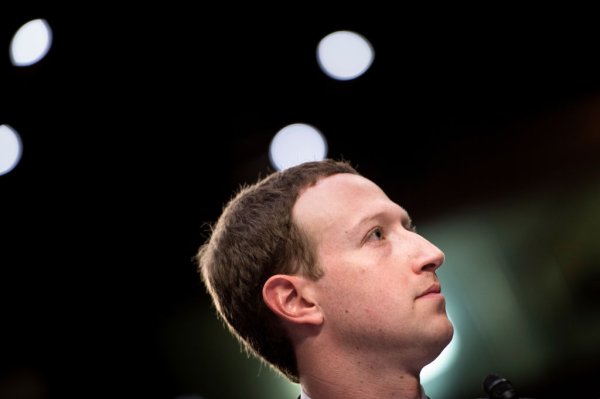 The U.K. May Change the Rules That Turned Facebook Into an Empire. Will Other Countries Follow?
Next Up: Editor's Pick