Cardi B confirmed that the music charts aren’t the only place she’s establishing herself as a force to be reckoned with when she showed up to the 2019 Met Gala red carpet on Monday in a stunning Thom Browne gown.

The Bronx rapper, who famously rapped about her “red bottoms and bloody shoes” took to the red carpet in a new bloody look, a custom, hand-embroidered Thom Browne gown with a sweeping train and a matching Stephen Jones headpiece. The look, which was decorated with 30,000 burned and dyed coque feathers and took 35 people more than 2,000 hours to create, was a strong interpretation of the night’s piquant theme, “Camp: Notes on Fashion,” which was inspired by Susan Sontag’s iconic 1964 essay, Notes on “Camp.”

This isn’t the first time that Cardi has stopped red carpet traffic at the Met Gala; last year, Cardi walked the red carpet in a resplendent Catholic Madonna-inspired look that was a wink-and-a-nod to her pregnancy at the time and the night’s theme, Heavenly Bodies: Fashion and the Catholic Imagination. 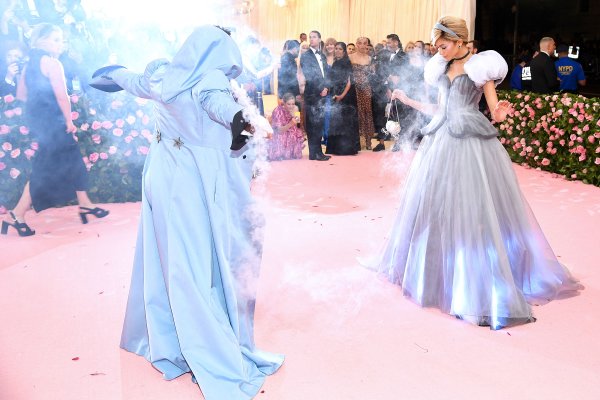 Zendaya Is Doing Magic Tricks in a Glowing Cinderella Gown at the 2019 Met Gala Right Now
Next Up: Editor's Pick