Melisandre may have just given us a huge clue about Cersei Lannister’s potential fate.

During season 8, episode 3 of Game of Thrones, Melisandre recited a cryptic phrase to Arya Stark about her past and future that led many fans to believe Arya is fated to kill Cersei.

But first, let’s rewind back to season 3 when Melisandre and Arya first met. Back then, Melisandre told Arya, “I see a darkness in you. And in that darkness, eyes starring back at me. Brown eyes, blue eyes, green eyes. Eyes sealed shut forever. We will meet again.”

Even Arya notes that Melisandre’s prediction has proven true thus far: Arya killed several people, shutting their eyes forever, before the two met again. So when the two reunite at Winterfell, Arya puts a good deal of faith in what Melisandre has to say.

Melisandre repeats the (rearranged) phrase to Arya about shutting “brown eyes, green eyes, and blue eyes.” Arya realizes in this exact moment that she is fated to kill the Night King, who has blue eyes. Arya runs off, stabs the Night King and saves all of humanity.

Now, Arya can seemingly get back to her kill list, which she has revised. At the very top of that list is Cersei who — you guessed it — has green eyes.

Arya has plenty of reasons to want to assassinate the Queen of Westeros: She conspired to kill Arya’s direwolf, Nymeria; was complicit in Ned Stark’s beheading; and held Sansa Stark captive for several years. Plus, the Lannisters successfully killed Robb and Catelyn Stark. Arya may have forgiven the Hound for his misdeeds, but she’s unlikely to let her grudge against Cersei go.

Looking back at the corpses Arya has left in her wake, it’s unclear whether she has killed a green-eyed person yet. Walder Frey and Meryn Trant certainly had brown eyes, and the Waif looked to have blue eyes.

Arya has killed dozens of people, including every male member of House Frey in season 7, so it’s certainly possible she has already murdered someone with green eyes. But fans are still hopeful that Arya will complete her list.

Some fans are even merging this prediction with the valonqar prophecy that Cersei will die at the hands of a “little brother.” While Tyrion or Jaime might be the more obvious choice for the valonqar, if one of them dies without Cersei knowing, Arya could borrow their face as a disguise to gain Cersei’s trust before murdering her.

The teaser for the next episode also teased a possible connection between Arya and Cersei. During that clip, Daenerys declares her plans for Cersei: “We’ll rip her out, root and stem.” If that phrasing sounds familiar, it’s because fans of the show have heard it before.

When Arya wreaked havoc on House Frey while wearing Walder Frey’s face, she scolded his men: “But you didn’t slaughter every one of the Starks. No, no, no. That was your mistake. You should have ripped them all out, root and stem. Leave one wolf alive, and the sheep are never safe.” Every word on the show is intentional, so it is possible that Daenerys will recognize Arya’s skills and send her into the Red Keep to stealthily kill Cersei and all her followers. 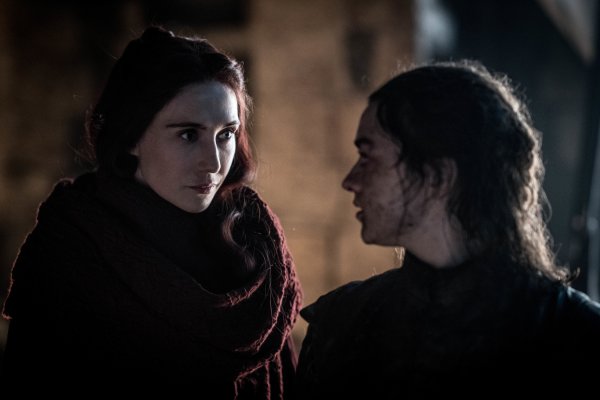 How That Epic Arya Stark Scene Affects a Crucial Game of Thrones Prophecy
Next Up: Editor's Pick