New Japanese and Thai Monarchs Are In the Spotlight, But Here Are Some of Asia's Other Royals

Japan is set to usher in a new imperial era come May 1: Crown Prince Naruhito will take the throne, ushering in the Reiwa Era and becoming the 126th emperor of Japan.

The Japanese monarchy is said to be the world’s oldest, but Japan is just one of roughly a dozen countries in Asia with monarchs as their head of state. In some, the monarchs play a solely ceremonial role, while in others, such as Brunei, they possess considerable political power. Given all the attention over his succession, Naruhito is probably the best known scion of an Asian royal house—along with Thailand’s King Maha Vajiralongkorn, whose three-day coronation ceremony begins on May 4.

Here are some other Asian royals you may be less familiar with.

Prince Azim, 36, is the second son of the tiny nation’s Sultan. Described by Forbes as a “paparazzi favorite”, the prince is well known for hosting A-list parties with celebrity guests the likes of Janet Jackson and Pamela Anderson. In 2007, he reportedly hired a private jet to fly an almost $4 million necklace to Mariah Carey.

The prince is also involved in the film business, having produced a number of pictures under the name Azim Bolkiah. On IMDb, he is credited for his work in six movies including You’re Not You, a 2014 film that stars Hilary Swank and saw a sellout premier at the Tokyo International Film Festival.

The 27-year-old Prince Abdul Mateen is the fourth son of the Sultan of Brunei. Leading a less extravagant (though still opulent) life than his older half-brother, the prince graduated from the University of London’s School of Oriental and African Studies (SOAS) in 2016, where his Facebook page states he studied international diplomacy. Prior to that, he served as a lieutenant in the Brunei armed services and graduated from the Royal Military Academy Sandhurst in the U.K., according to an interview he did with GQ Thailand in 2016.

The Prince’s active lifestyle is evident on his Instagram page, where he has 1.1 million followers. He plays water polo competitively, is an equestrian and also does martial arts. “The moment I feel my fitness level dropping, it makes me feel funny, so being active and staying in shape is very important to me,” he told GQ Thailand.

Prince Jigme became king after his father, Jigme Singye Wangchuck, abdicated the throne in 2006. The 39-year-old studied at boarding school Phillips Andover Academy in Massachusetts before obtaining a degree in political science from Oxford University. He and his wife hosted the U.K.’s Duke and Duchess of Cambridge when they visited Bhutan in April 2016.

His looks earned him the title “Prince Charming” before his ascension to the throne, and his affable personality has seen him referred to as the “People’s King.” He is a fan of basketball, notably the Philadelphia 76ers, and enjoys impersonating singer Elvis Presley, according to the Washington Post.

President Pranab Mukherjee with Chief Guest King of Bhutan, Jigme Kheser Namgyel Wangchuck, during At Home reception hosted by him on the occasion of 64th Republic Day at Rashtrapati Bhavan in New Delhi on Saturday.
Shekhar Yadav/India Today Group/Getty Images

The son of the current sultan of Malaysia’s Selangor state, located north of Kuala Lumpur, Tengku Amir Shah is known for his philanthropy work. The 28-year-old provides financial backing for a number of youth organizations in his community, according to local news outlet Malay Mail, and regularly participates in their events. He is said to have joined an expedition to the country’s Mount Kinabalu, the country’s tallest peak, with physically handicapped children some years ago.

He is also the president of the Football Association of Selangor and has been photographed with kids supported by the organization’s youth projects on his Instagram page.

Princess Sirivannavari Nariratana, 31, is one of two daughters of King Vajiralongkorn, who will be formally crowned the monarch of Thailand next week. The princess is the founder and director of an eponymous fashion label, beginning her journey into fashion when, as a 20-year-old fashion student, was invited to present her collection at Paris Fashion Week.

Fashion aside, the Princess is also an accomplished equestrian and regularly travels to Europe for practice. She is a former national badminton player and won a gold medal in the women’s team event at the Southeast Asian Games (SEA Games) in 2005.

Fourteen-year-old Dipangkorn Rasmijoti is the seventh and youngest child of King Vajiralongkorn, and also the presumed heir to the throne after his father. He attends a private school in Germany, according to Reuters, and a letter he wrote in German to rescuers that freed 12 young footballers and their coach trapped in a cave in northern Thailand last year suggests he is fluent in the language.

This picture by Thailand's Dailynews shows Prince Dipangkorn Rasmijoti (2nd R), 12, greeting well-wishers in Bangkok on October 25, 2017, near the site of where his grandfather, the late Thai King Bhumibol Adulyadej, will be cremated on October 26.
AFP Contributor—FP/Getty Images
More Must-Read Stories From TIME
Subscribe to TIME 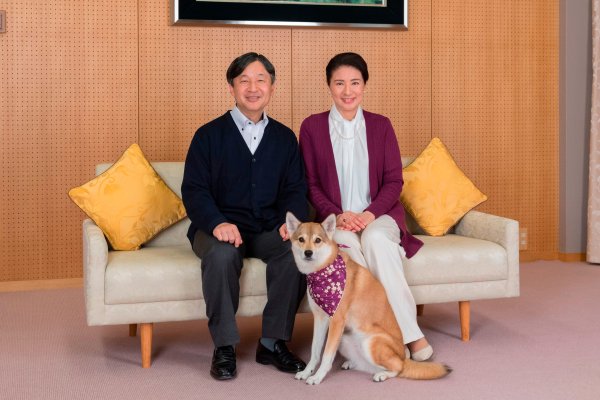 Here’s What to Know About Japan's New Emperor
Next Up: Editor's Pick