Warning: This post contains spoilers for the Battle of Winterfell episode of Game Thrones season 8.

After leaving Westeros to sail to Volantis in the third episode of Game of Thrones‘ seventh season, Melisandre returned to Winterfell just in time for the long-awaited showdown with the army of the dead on Sunday. Melisandre may not be much of a fighter, but she still played a pivotal role from the very beginning of the episode. The Red Priestess served as the battle’s lifeblood, supplying fire and crucial motivation to Arya.

After telling Jorah Mormont to ask the Dothraki to raise their swords, she reached out and touched one while uttering an incantation. All of their swords then burst into flame, a breathtaking sight that could be seen from the ramparts of Winterfell — where many of the show’s major players were gathered.

She came in handy again as fire started to fail and wintry conditions made it impossible for Dany and Jon, perched atop their dragons, to see anything. As the home team struggled to light the trenches and create a fiery barrier between the living and the dead, she held onto the stakes in the trench and uttered an incantation, over and over again. Suddenly the trenches lit up and thousands of wights went up in flames. Dany and Jon, perched upon their dragons, could then see again and continued to burn the undead.

Later in the episode, she met up with Arya and the two reminisced about the time that Mel told her that she would shut many eyes, including blue eyes, back in season 3. While many originally thought that the blue eyes she referenced were her own, her prediction turned out to be much more impactful. By dropping Syrio Forel’s famous line of “What do we say to the god of death,” Mel prompted Arya to respond “Not today” and sprint off. Arya, of course, went on to kill the Night King — he of the piercing blue eyes.

The episode ended with Melisandre walking away from the castle before dropping her necklace to reveal the older, true version of herself and disintegrating into dust as Davos watched on. 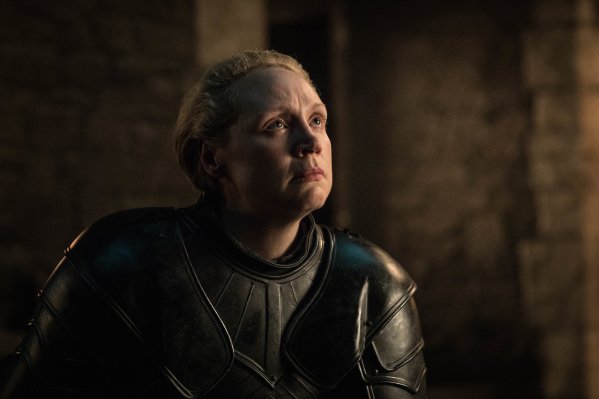 The Real History of Medieval Knights Makes Brienne's Big 'Game of Thrones' Moment Even More Meaningful
Next Up: Editor's Pick