The 5 Songs You Need to Listen to This Weekend

Friday may be Taylor Swift‘s new music release day — the pop queen put out her first new song of the next era, the bubblegum-bright “ME!” featuring Panic! At the Disco’s Brendon Urie, and promptly took over the internet — but plenty of other artists also shared new releases for this weekend, too. FKA twigs returns after a three-year absence with a heart-rending, understated performance piece. Nick Murphy explores a more acoustic side on “Dangerous.” P!nk gets experimental on the country-meets-electronic twangs of “(Hey Why) Miss You Sometime” off her new album. Ellie Goulding and a slew of top-tier artists contribute to a new Game of Thrones-themed album project, For the Throne. Here are the five best songs to listen to this weekend.

FKA twigs is a performance artist through and through, her enigmatic image revealing only that which she is ready to share. After more than three years, the British singer and dancer has returned with her first new single, “Cellophane.” It’s a softly unsettling, devastating tune rendered in minimalist piano chords and twigs’s delicate, tightly-wound vocals. Her high notes are a carefully controlled keening, coiled with tension. The video, too, is a gorgeous work of CGI and choreography; she says she taught herself to pole dance in order to bring the visual to life. Come for her hyper-specific vision, but stay for the message. “Why don’t I do it for you?” she wails, the raw edges cutting close to home.

Nick Murphy became a hit back in 2014 with songs like “Talk Is Cheap” under the moniker Chet Faker, wordplay on the famous jazz musician Chet Baker; the Australian singer-songwriter-musician’s early music was an electronic, drop-heavy approach to jazz. Now, after an extended absence to travel and write once more, Murphy is returning as himself on the many-faceted Run Fast Sleep Naked. “Dangerous” is multi-layered and experimental, but maintains an acoustic heartbeat and a measured, reflective tone. “Maybe I’m dangerous,” he admits: “According to you, it could’ve been love with us.” Instead, we have the music.

“(Hey Why) Miss You Sometime” P!nk

P!nk has to be one of the most consistent pop stars of the past decade-plus, which counts eight albums. Hurts 2B Human is her 2019 offering, coming just two years after 2017’s Beautiful Trauma. This time, she roped in a smart cast of collaborators, including R&B crooner Khalid and country star Chris Stapleton. “(Hey Why) Miss You Sometime” shows off her experimentation with country-tinged melodies as well as some AutoTune elements and bouncy electronic beats. The result is something intentionally messy but definitely fun, just like the complicated relationship she sings about.

“You know you’re fighting in a losing battle, making a noose out of your hollow crown,” sings British pop singer-songwriter Ellie Goulding off the top of her new track “Hollow Crown,” written for an album released alongside this final season of Game of Thrones. It’s an aptly brooding, trap-influenced song that echoes the dark themes of this season, and sees Goulding — known for explosive pop hits like “Starry Eyed” and “Burn” and more recent release “Sixteen” — explore new, more hip-hop-adjacent territory with her distinctive vocal twists. She’s in good company on this For the Throne project, which also tapped collaborators like Maren Morris, Rosalía, The National and SZA in an eclectic A-list of artists. However the chips may fall at the Battle of Winterfell this weekend, at least we’ll have this project to remember the moments before the impending bloodbath. And if you don’t watch Thrones? Not to worry; “Hollow Crown” and the rest of the songs stand up on their own.

Still one of the foremost voices of grime, Stormzy is back with his first release since 2017’s hit debut album on “Vossi Bop.” The U.K. rapper takes this track’s title from a viral dance trend across the pond started by NL Vossi, but the infectious beat, rolling rhyme scheme and political commentary are all his own. Keep an eye out for the Idris Elba cameo, and keep an ear open for the Idris-referencing James Bond line bringing it home. 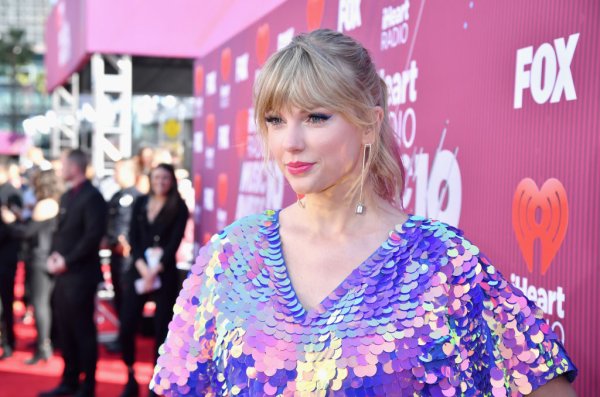 Here's Every Reference in Taylor Swift's New Video
Next Up: Editor's Pick