You Can Google Thanos for an Avengers: End Game Easter Egg

Certain types of Avengers fans have been avoiding the web and social media for weeks to avoid spoilers for the franchise’s latest installment The Avengers: End Game. Other types of fans, are crawling the web for any hint of their favorite superheroes fate or any secret Easter eggs left by Marvel and its parent company, Disney. Either type of fan should go ahead and Google “Thanos” on the search engine.

If you go to Google’s search window and type in the name of the super-villain “Thanos” who may have disappeared half of the planet’s population in a bid to balance the universe. Once that’s done, click on the golden glove that appears on the right side of the screen. Despite the lack of IRL Infinity Stones, as 9to5Google and others have noted, the glove will snap and then half the search results will turn to dust while sound effects waft out of your speakers. Luckily the process is reversible, by simply clicking the glove once again and triggering the Time Stone that puts everything back to normal.

As Danny Sullivan, Google’s public liaison of search, said on Twitter, “It was just a thing we thought would be fun, because it’s nice to have a little fun in life.” He’s right! It’s the perfect little bit of entertainment for fans who want to get in on The Avengers: Endgame action, without spoiling themselves for the film. 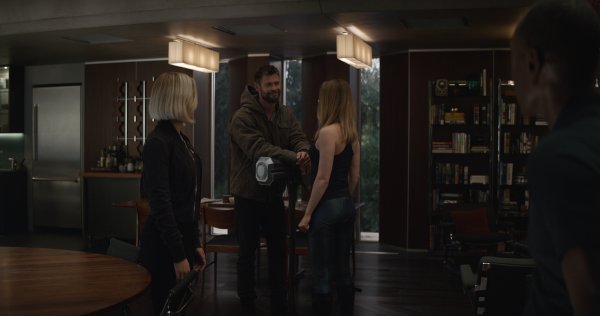 Endgame Changed the Avengers Forever. Here's Who's in the Group Now
Next Up: Editor's Pick