Does Avengers: Endgame Have a Post-Credits Scene? An Investigation

Marvel Studios movies have changed the cinematic landscape: A decade ago few people would have thought to sit through the credits of a movie in order to see a teaser for the next film in the series. But now, thanks to 11 years of Marvel movie post-credit scenes, many moviegoers eagerly await the short scenes that pop up in the middle and end of almost every major franchise film.

Last summer’s Avengers: Infinity War ended on an incredible cliffhanger. In the movie’s post-credits scene, S.H.I.E.L.D. agent Nick Fury (Samuel L. Jackson) drops a pager, mid-message — featuring the distinctive symbol of Captain Marvel — on the ground before he disintegrates. That moment sets up not only Captain Marvel’s solo film, which premiered in March, but also the events of Avengers: Endgame.

Because Endgame marks the closing of Marvel’s Phase Three, which started with 2016’s Captain America: Civil War, fans are eagerly anticipating any sort of hint of what might happen next. After all, the movie features major character deaths.

So should you wait for an end-credits scene at the end of Avengers: Endgame? Well, it’s complicated.

There is no post-credits scene in Avengers: Endgame

A word to the wise: Unless you really care about experiencing every minuscule moment of this film, it’s probably not worth sitting through the credits for Avengers: Endgame. The movie is already three hours — and that’s before you account for previews and credits. So if you drank a large soda and want to beat the bathroom line at the movie theater, feel free to do so. To be perfectly clear: There is no post-credits scene for Avengers: Endgame.

Wait! There is something — a sound

OK, are all the spoiler-averse people gone? Great. Now we can talk about that sound.

What is the sound at the end of Avengers: Endgame?

A clanking noise begins to play over the credits at the end of Avengers: Endgame. It sounds like a hammer on metal. Presumably this sound is pulled directly from the scene in the first Iron Man movie when Tony Stark begins to construct his suit for the first time while he is being held for ransom by terrorists.

What is the significance of the sound at the end of Avengers: Endgame?

Iron Man was the first movie in the Marvel Cinematic Universe. The success of that film, largely carried by Robert Downey Jr.’s charisma, launched the most profitable movie franchise of all time. The story of the Avengers has always belonged to Iron Man: He started the current superhero era and Avengers: Endgame marks the end of his journey.

Tony Stark sacrifices himself at the end of Avengers: Endgame in order to save the rest of humanity. So that clanking sound is a callback to his origin story. It’s also a tribute to the cocky playboy who eventually learned that he had a heart and saved the universe.

Iron Man fans shouldn’t necessarily despair. The scenes — or in this case, sounds — that play at the end of Marvel movies usually hint at what is to come. The sound of hammering might indicate another Iron Man suit being built.

It’s unclear whether some other character in the Marvel Cinematic Universe will take up the Iron Man mantle. Both Pepper Potts (Gwyneth Paltrow) and James Rhodes (Don Cheadle) already have suits of their own and could adopt the name. Or an entirely new character could don a new suit and become a superhero. Stranger things have happened. 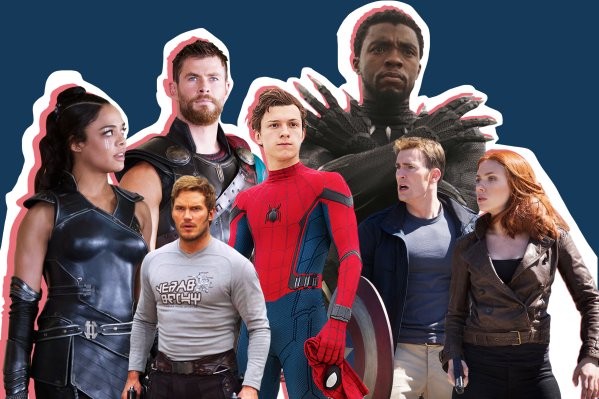 We Ranked Every Single Marvel Cinematic Universe Movie
Next Up: Editor's Pick