Prime Minister Theresa May was urged to investigate which member of her senior team leaked the conclusions of a meeting of her National Security Council on the role of China’s Huawei Technologies Co. in the U.K.’s telecommunications network.

At least five ministers, and a dozen former ministers, have written to the prime minister demanding to know whether the Official Secrets Act has been breached, and who by, according to one of those involved, who asked not to be named because the letters are private.

Leaks of Cabinet meetings have become the new normal in May’s government, as splits over Brexit and the question of who will succeed the prime minister have seen ministers trying to advance themselves and do down rivals.

But the U.K.’s spies were outraged by the report on the front page of Wednesday’s Telegraph of the NSC’s decision to allow Huawei to work on parts of Britain’s so-called 5G network.

The Tuesday afternoon meeting of the NSC should have been confidential. On the table was whether to impose a full ban on the Chinese telecoms giant over security concerns — just as the U.S. has done — or to compromise by allowing Huawei to be involved in non-sensitive elements of 5G technology.

The leaks, within hours, forced May’s de facto deputy David Lidington to answer questions on Huawei in Parliament on Wednesday.

By conceding that she will leave office once Brexit has been delivered, May has accelerated a leadership competition in the Conservative Party. That means policy choices are playing out against the backdrop of trying to appeal to rank-and-file members who have the final say.

Among the attendees at the NSC meeting were several of the candidates widely tipped to want the job: Foreign Secretary Jeremy Hunt, Home Secretary Sajid Javid and Defence Secretary Gavin Williamson.

The media coverage left intelligence officials rolling their eyes at the behavior of ministers. One senior agent, speaking on condition of anonymity, lamented the invasion of politics into a highly technical debate. A person familiar with the thinking of Culture Secretary Jeremy Wright, another attendee at the NSC meeting, described the incident as disappointing and embarrassing.

An inquiry that identified the culprit of the leak could see them fired or face calls to resign.

One of the ministers calling for a probe said discipline has completely broken down in the government. Cabinet discussions are now routinely leaked to journalists within minutes of the meetings breaking up. Ministers compete to give their version of events so they can better appeal to colleagues and Tory members.

The situation has become so bad that ahead of an expected Cabinet showdown this month, May demanded ministers hand over their mobile phones in an attempt to stop the leaks. 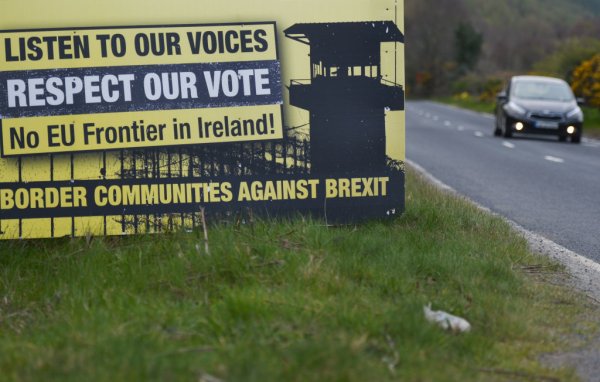 A Journalist's Killing in Northern Ireland Comes as Tensions Threaten to Boil Over
Next Up: Editor's Pick