President Trump Says He Would Fight Impeachment in the Supreme Court. That's Not How It Works

Under the Constitution, the House of Representatives can vote to begin the impeachment process if it believes a president is guilty of misconduct in office, and the Senate then holds a trial to determine whether to remove the president from office. But in tweets on Wednesday morning, Trump argued that he would “first head to the U.S. Supreme Court” to stop an impeachment drive.

Laurence Tribe, a constitutional law professor at Harvard who has co-authored a book on impeachment, called Trump’s argument “idiocy,” saying the Supreme Court would want nothing to do with a legal challenge like that.

“The court is very good at slapping down attempts to drag things out by bringing it into a dispute where it has no jurisdiction,” he told TIME.

In fact, the framers of the Constitution debated whether presidential impeachments should be handled before the Supreme Court, before deciding that was a bad idea for four main reasons.

First, as Tribe and constitutional lawyer Joshua Matz explained in To End A Presidency: The Power of Impeachment, the president appoints members of the Supreme Court, so at least some justices — such as Neil Gorsuch and Brett Kavanaugh, in Trump’s case — would have a conflict of interest.

Presidents are also protected from criminal prosecution while in office, but not after they leave the White House. The framers also worried that a former president might end up fighting criminal charges all the way back to the same Supreme Court that had removed him, creating yet another conflict of interest.

“It would be a conflict of interest for the Court to sit in judgment of the president in an appeal arising from the very conduct that got him impeached if the Court had any role in the impeachment process,” Tribe told TIME.

The third concern was about the court’s size. With so few members — the current court has nine, although it has changed in size over the years — it could be more easily corrupted than larger and more representative groups like the Senate.

Alexander Hamilton made that case directly in the Federalist Paper No. 65, writing “the awful discretion which a court of impeachments must necessarily have” meant it would be dangerous to leave “the trust to a small number of persons.”

And finally, the framers were worried that the court would not have the same “credit and authority” to rule on an inherently political process like impeachment as elected representatives.

Even if the framers’ arguments themselves weren’t enough, the Supreme Court itself has also said in more recent years that impeachment is not part of its duties. Considering a case about a federal judge named Walter Nixon, the Supreme Court ruled in 1993 that disputes over the legitimacy of impeachment were “political questions” to be handled by Congress.

“Supreme Court doctrine on this is well established and crystal clear,” said Richard Pildes, a constitutional law professor at New York University. “The Supreme Court has said that impeachment involves what are fundamentally and pervasively political judgments. For that reason they’re not judgments that courts have an appropriate role to assess.”

He noted another flaw in Trump’s tweets: His argument about the definition of “high crimes and misdemeanors” which the Constitution says can be the basis for impeaching a president.

But, Pildes said, “high crimes and misdemeanors” does not mean only crimes, but also covers a wide range of misconduct.

“Congress can impeach the president for reasons that do not necessarily involve criminal activity,” Pildes said. “For example, if a President is pervasively undermining the national security of the United States, the President may not have committed a crime in doing that, but one could imagine a Congress impeaching a president, and appropriately so, for that.” 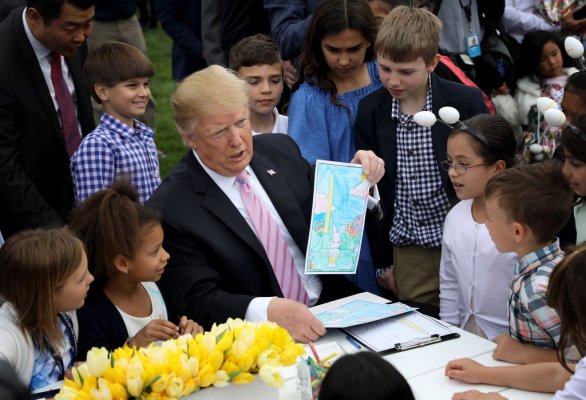 President Trump Bragged About the Border Wall to a Group of Children at the Easter Egg Roll
Next Up: Editor's Pick