The two stars of the Avengers franchise grand finale, which hits theaters this Friday, April 26, sent Marvel Cinematic Universe (MCU) fans on social media into a tailspin by donning the infinity stones at the Avengers: Endgame premiere on Monday in Los Angeles.

Johansson, who has played Natasha Romanoff/Black Widow since 2010’s Iron Man 2, wore the rings on each of her five fingers that were connected to a large bracelet. Larson, the actor behind the titular hero of the MCU’s latest installment Captain Marvel, wore similar jewelry with a different design.

In this composite image a comparison has been made between the jewelry (ring detail) of 'infinity stones' worn by Scarlett Johansson (L) and Brie Larson at the world premiere of 'Avengers: Endgame' at the Los Angeles Convention Center on April 22, 2019 in Los Angeles, California.
Amy Sussman—Getty Images

The six powerful gems are comprised of the Reality Stone, Soul Stone, Mind Stone, Space Stone, Time Stone and Power Stone. Both actors’ looks at the premiere resemble the way Thanos, the ultimate MCU villain, wore the gems on his hand.

Fans on Twitter couldn’t help but speculate: could it be a clue to how Endgame will end? Will Captain Marvel and Black Widow be the ones to get all of the stones back from Thanos? After all, they are two of the characters among the crew who we know to be alive.

Larson also shared the bling with her 4.7 million followers on Instagram before arriving to the premiere. “Snapped,” she captioned the simple video.

Carol Danvers/Captain Marvel knows a thing or two about infinity stones. In Captain Marvel, which came out last month, the intergalactic superhero encountered the Tesseract, the blue cube which houses the Space Stone. (She left it on Earth with her cat, Goose, and Samuel L. Jackson’s Nick Fury, in the 1990s.)

Whether this was purely a fashion choice or a clue to the outcome of Endgame, the actors were absolutely serving looks.

Here are some of Twitter’s best reactions to the style statement. 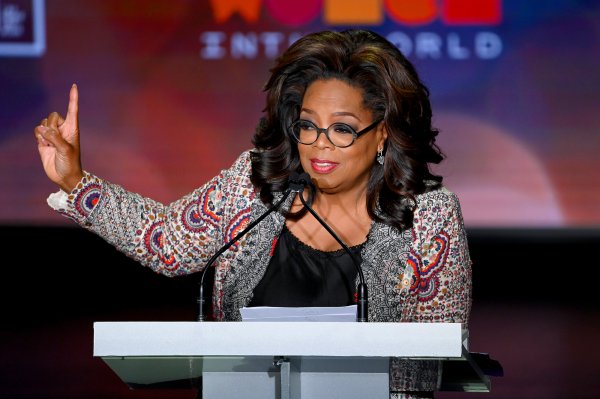 Oprah Always Travels With Avocados Grown From Her Own Orchard Because 'It's Ridiculous to Pay for Avocados'
Next Up: Editor's Pick