A Sri Lankan soldier stands guard near a car explosion after the police tried to defuse a bomb near St. Anthony's Shrine in Colombo on April 22, 2019, a day after the series of bomb blasts targeting churches and luxury hotels in Sri Lanka.
JEWEL SAMAD—AFP/Getty Images
By Himal Kotelawala / Colombo

Balkan Fernando was at his home in Kochchikade, a suburb north of Sri Lanka’s capital, when he heard the first bomb go off around 8:45 a.m.

He sprinted toward the deafening sound that had come from nearby St. Anthony’s Shrine and found members of the country’s Christian minority evacuating their Easter service amid a scene of carnal wreckage.

“It must’ve been at the end of mass, during the holy communion,” he tells TIME. “I ran to the church as soon as I heard it. I was inside about two minutes after the blast. There was a lot of flesh scattered everywhere. I must’ve seen about 25 bodies in there.”

Liyanage Rasika, who sells vegetables in a lane near the church, says ambulances did not arrive for about 20 minutes. “We helped take the bodies to the hospital in three-wheelers and vehicles from the neighborhood,” he says.

He recalls churchgoers rushing out of the building, soaked in blood. “There was blood all over them. Many were dead inside.”

The explosion at St. Anthony’s was not the only blast to rock the South Asian Island this past Easter Sunday. Luxury hotels and two other Christian churches were among the targets of coordinated suicide bombings that killed 310 people and wounded another 500. The deadly attacks shattered the of peace on the island nation of 21 million.

Sunday’s violence was the deadliest to hit Sri Lanka since the 2009 end of the civil war between government forces and the separatist Liberation of Tamil Tigers Elam in the country’s north and east. But even during the 26-year Tamil insurgency, notorious for its suicide attacks, there were never so many civilian casualties reported on a single day.

The attackers’ motivation — beyond inflicting maximum carnage — remains unclear. But government officials have said the suicide bombers were Sri Lankan nationals who carried out the attacks with the help of international militants, and a Syrian national is in police custody in connection with the attacks. Authorities are eager to pin the atrocities on little-known radical Islamist organization National Thowheeth Jama’ath (NTJ), but neither it nor any other organization has claimed responsibility.

Fernando says the possible new sectarianism to these attacks is not reflective of the diverse community he was born and raised in. “We all helped evacuate victims. Muslims, Buddhists and everyone else living here helped. There is no racism in this town. We all live peacefully here.”

However, just last year, a state of emergency was declared when hardline Buddhist mobs ransacked Muslim homes and businesses in Kandy — a city in central Sri Lanka — reportedly in retaliation for the beating of a Buddhist by Muslim men. In 2014, at least two people were killed and 80 wounded during sectarian clashes in Dharga Town in the country’s southwest. Much of the blame for inflaming tensions has been laid at the feet of hardline Buddhist groups like Bodu Bala Sena, whose zealous followers believe that Sri Lankan identity is inseparable from Buddhism.

Barely 48 hours after the incident, the initial shock and confusion at the sheer magnitude of the attacks has given way to anger at the government’s failure to act on apparent intelligence that NTJ was planning to carry out suicide attacks targeting “prominent churches.”

Prime Minister Ranil Wickremesinghe conceded Sunday evening that authorities had indeed received information, but said that neither he nor his cabinet had been briefed.

Defence Secretary Hemasiri Fernando, who visited the blast site in Kochchikade on Monday, said the information received had been too vague.

“The intelligence never indicated that it was going to be an attack of this magnitude,” he told reporters. “They were talking about one or two isolated incidents. Not like this.”

The blame game will worsen tensions and miscommunication in a government already divided between the United National Party (UNP) faction, headed by Prime Minister Wickremesinghe, and President Maithripala Sirisena, who the UNP helped elect to power.

Wickremesinghe says the Security Council, which reports to President Sirisena, has refused to invite him to its meetings since Oct. 26 last year, when Sirisena unceremoniously removed him from his post and appointed in his place the current opposition leader (and erstwhile president) Mahinda Rajapaksa. Wickremesinghe’s ouster was later reversed by the Supreme Court, but relations between him and Sirisena have broken down, seemingly irreparably. This rift will become increasingly relevant in the discourse following the Easter Sunday attack.

For now, the people of Kochchikade want solutions that go beyond politicking.

One resident, who identified himself as Edward, says security forces and the government need to act quickly and decisively. “Or we might go back to the dark days of before.”

Others, like Fernando, are still numb from the shock.

“I can’t comprehend what has happened,” he says. “It’s still hard to wrap my head around it.” 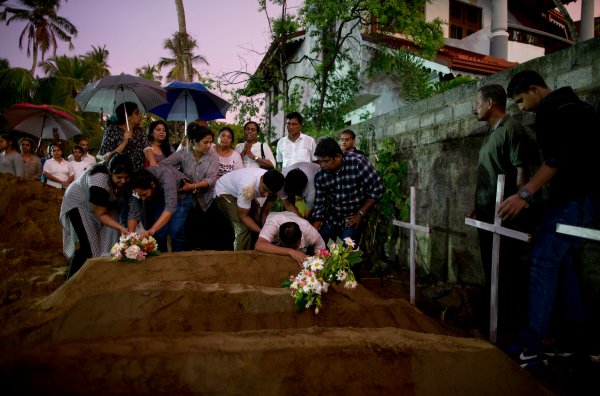 These Are Some the Victims of the Sri Lanka Easter Bombings
Next Up: Editor's Pick