Despite her protestations that she didn’t even want to be a knight, Game of Thrones fans knew better. By the time Brienne of Tarth (Gwendoline Christie) was knighted by Ser Jaime in the series’ final season, the scene was a hailed as a milestone moment for the beloved character. The fact that the episode was titled “A Knight of the Seven Kingdoms” was just one more reason to feel Brienne was finally getting the recognition she deserves.

For Joëlle Rollo-Koster — a professor of medieval history at the University of Rhode Island who was herself knighted by the French government as a Chevalier of the Ordre des Palmes Académiques — the moment held another layer of meaning: Brienne has long drawn comparisons to Joan of Arc, and now there’s even more complexity to the relationship between the fictional character and the real 15th century Frenchwoman, who defied the conventions of her time, led an army to victory and was killed for her transgressions.

But first, that knighting ceremony. Game of Thrones is known to often draw inspiration from medieval European history, so how did Brienne’s big moment compare to what we know about the real thing?

Rollo-Koster points to the Arthurian romances written by Chrétien de Troyes in the 12th century as perhaps the earliest source for a narrative description of dubbing someone a knight — a word related to the French adouber, a verb meaning to give someone weapons. The scholar Jean Flori traced a turning point to that body of work, citing the year 1180 as the moment when the word switched from meaning principally “to arm a knight” to meaning “to make someone a knight.”

One of the stranger elements of the dubbing ceremony is something the French called colée.

“The colée is a slap on the face,” Rollo-Koster says. “I explain it to my students as, number one, you need to resist that slap. If you’re a knight on your knees and somebody punches you and you are not able to resist, that shows you don’t have much strength. There’s that macho strength element, but there is also a memory element: Here, I’m slapping you, let it be the last time somebody slaps you on the face.”

Brienne of Tarth gets knighted by Jamie Lannister at last.
Helen Sloan/HBO

Over time, that ceremony evolved from a literal blow or slap to what has been described as “a gentle stroke with the flat of the sword on the side of the neck, or on either shoulder as well.” That movement — might have gotten a nod on Game of Thrones with Jaime’s brush on Brienne’s shoulder though it’s hard to say for sure — evolved into the sword-tapping familiar from dubbing ceremonies in pop culture. But, says Rollo-Koster, “if it was a true medieval ceremony in the 11th or 12th century, [Brienne] would have been smacked in the face.”

The move away from the blow isn’t the only way the ceremony evolved in the Middle Ages.

Early descriptions involve an older knight recognizing a younger knight — à la Jaime and Brienne — but as the 13th century approaches, the Church becomes involved, with a priest or bishop eventually taking the place of the fellow knight.

“That ceremony is a rite of passage. By the 11th and 12th century, it’s not overly ritualized, but people say a few words,” Rollo-Koster says. “Usually the good knight is going to have a younger knight swear that he’s going to do right, do justice, help the poor, the widow and the orphan, support the church, don’t be mean, don’t lie, be honorable. Then the Church starts to bring in that you need to be a knight of God. We have an evolution from a pure secular ceremony to a religious ceremony. What we saw [on Game of Thrones] was a mishmash — a knight ordaining another knight, but using religious language.”

To Rollo-Koster, that religious language — in which Ser Jaime references three of the divine aspects of Game of Thrones‘ Faith of the Seven — doesn’t seem so different from what a real-life medieval priest might have used. Just as Jaime invokes the name of the warrior, the father and the mother, real priests would invoke Christianity’s holy trinity, the Father, the Son and the Holy Spirit. Rollo-Koster also says that medieval priests often spoke Latin so poorly that they might have accidentally invoked a female Holy Spirit by using a feminine form of the word.

“They would make a mistake and turn it into the feminine, and that’s exactly what they are doing in the show. He says in the name of the father and then the name of the mother,” she says. “It’s a take on an extremely masculine ceremony, which they turn feminine. They turn it feminine in the language of the dubbing, the father and the mother, and also in the person they are dubbing, because you never dub a woman, as [Brienne] says. The play with it is fun and this is what brought me right away to Joan of Arc.”

After all, transgressions of gender norms are central to Joan of Arc’s story.

Though she led her army to an important win at Orléans in 1429, fighting against the English during the Hundred Years’ War, she was later captured and tried as a heretic.

Rollo-Koster calls attention to the fact that — unlike many other real women throughout history who dressed as men in order to serve in the military — Joan of Arc’s gender was not concealed, even when she was wearing armor or men’s clothing. And when she was charged with religious crimes, the allegations included not just her claims of divine inspiration but also her wardrobe choices.

“What condemned Joan of Arc was her constant moving between men and women, men and women, this is what made her a heretic,” Rollo-Koster says. “She was called relapsed because she swore to get rid of her men’s clothes and take the female clothes back and put them on herself, but then she decided no, I’m not going to be wearing women’s clothes anymore. The moment she was back into men’s clothes, they say, O.K., we’re burning you.”

As Rollo-Koster notes, the very concept of chivalry was defined by its maleness — going all the way back to the linguistic ties between “virtue” and the Latin vir, meaning “man” — and women’s lack of participation was more than a matter of just traditional roles. In the record of Joan of Arc’s trial, there’s also a discussion of a sword she found at a church, and the question of whether she put it on the altar there. This matters so much because, if she had, it could be seen as a “pseudo knighting ritual,” Rollo-Koster says, as dubbing ceremonies often involved leaving the sword that would be used on a church altar in advance of the ceremony. If she had put her sword on the altar, she would have been taking part in another ritual from which women were barred.

That transgression “freaked medieval men out,” she says. Joan of Arc was burned at the stake in 1431. Brienne of Tarth, of course, wears armor and carries a sword too.

In the years since, Joan of Arc has been recognized as both a French national hero and a saint. And as fan reaction to Brienne’s knighting shows, the world today is a much more welcoming place for the idea that a woman could meet the ideals of knighthood.

Heading into the big Battle at Winterfell, Game of Thrones viewers can only hope that the links between Brienne and Joan don’t extend to the historical hero’s real fate. After all, there’s already at least one big difference between Brienne of Tarth and Joan of Arc (besides the fact that Brienne lives in a fantasy world of dragons and the dead).

Ser Brienne is now a Knight of the Seven Kingdoms — but though Joan of Arc became a saint, she was not officially dubbed a knight. 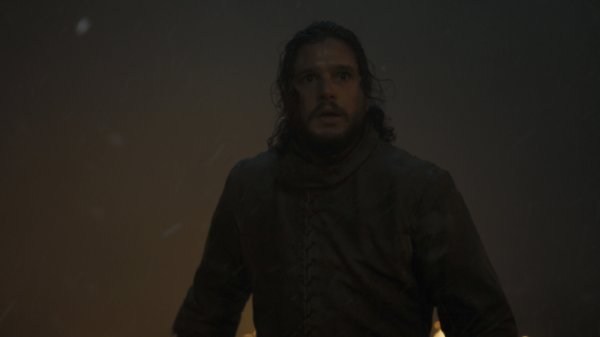 New Game of Thrones Photos Tease Jon Snow's Terrified Reaction at the Battle of Winterfell
Next Up: Editor's Pick