Herman Cain speaks at the Third Annual Multicultural Media Correspondents Dinner at the National Press Club in Washington, D.C. on Thursday, May 24, 2018. President Trump announced on Monday that he will not follow through with his plan to nominate Cain to the Federal Reserve Board.
Cheriss May—NurPhoto/Getty Images
By Alister Bull / Bloomberg

President Donald Trump said he won’t nominate Herman Cain for a seat on the Federal Reserve Board after opposition from his own Republican party appeared to sink the former pizza company executive’s hopes for Senate confirmation.

“My friend Herman Cain, a truly wonderful man, has asked me not to nominate him for a seat on the Federal Reserve Board,” the president said in a tweet on Monday. “I will respect his wishes.”

Cain, 73, is bowing out after a path to Senate confirmation appeared blocked. A fourth Senate Republican said earlier this month he’d oppose Cain, all but killing any chances that he’d receive Senate approval if Democrats stayed united in opposition.

The Trump loyalist, whose bid for the 2012 Republican presidential nomination ended amid accusations of sexual harassment and infidelity, had said as recently as Thursday that he was not going to withdraw. Cain’s comment, in an interview with Fox News, was made after an Atlanta woman came forward again with allegations of an extramarital affair that ended his White House run.

The president’s desire to place Cain and fellow supporter Stephen Moore on the Fed board had sparked concern over the politicization of the U.S. central bank. The Fed answers to Congress and was designed to have independent control over monetary policy, insulating interest rates from short-term political considerations that might do long-term economic harm.

Trump has shown no such restraint, repeatedly attacking Fed Chairman Jerome Powell for raising rates last year and discussing firing him in December as U.S. stocks tumbled. Since then, policy makers have become very cautious as U.S. economic growth slackened amid headwinds from abroad and they didn’t project any increases this year in their most recent forecasts.

With Democrats opposed to Cain and Republicans controlling 53 seats in the 100-seat chamber, opposition from a fourth Republican senator would have sunk his chances.

Cain, who backed Trump’s tax cuts and credited the president for a booming economy, had previously forecast a recession, which he blamed on President Barack Obama, and was arguing in favor of a return to the gold standard back in 2012.

The White House had not submitted paperwork for a Cain nomination to the Senate, which would have been for one of the two open seats Fed’s seven-seat board in Washington. The other is earmarked for Moore, chief economist of the conservative Heritage Foundation, who has echoed Trump’s demand for Fed rate cuts.

As of Monday, Moore had also not been formerly nominated to the Fed by the president — a routine delay as potential candidates for nominations undergo a background check.

Moore’s selection has also drawn scrutiny after it emerged that he had been found in contempt of court after he failed to pay his ex-wife some $300,000 in alimony after their 2010 divorce, the Guardian reported, citing court records. Moore also owes more than $75,000 in taxes and other penalties to the U.S. government, according to a January filing in the circuit court for Montgomery County, Maryland, where he owns a house. 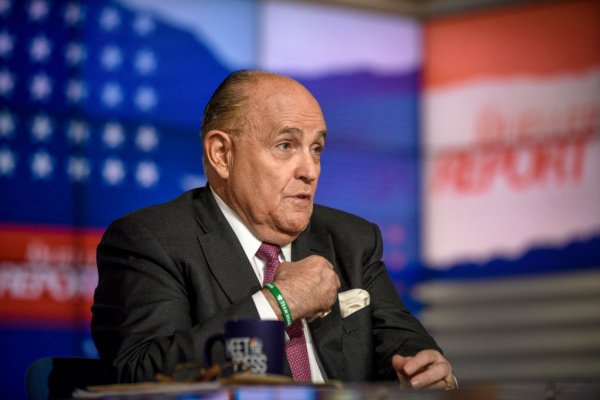 Giuliani: 'Nothing Wrong' With Taking Info From Russians
Next Up: Editor's Pick