For seven seasons, Game of Thrones‘s Brienne of Tarth has been a stoic force on the show: as acted by Gwendoline Christie, Brienne is a powerful warrior with an icy exterior and an unimpeachable sense of honor. She’s also gone through her fair share of pain, being regularly rejected by the men of her family and of the fighting ranks who view her gender first, and her aptitude later.

So on Sunday night’s second episode of Thrones season eight, seeing Brienne receive a knighthood — from Ser Jaime Lannister no less, was nothing short of heart-melting. Add to that the tear-filled smile she cracks after the deed is done and Tyrion Lannister, Tormund Giantsbane, Ser Davos and Podrick are cheering for her, and it’s perhaps the first time we’ve seen Brienne show emotion other than intensity, sadness or disdain. In other words, while we know the Battle of Winterfell against the Night King’s army is coming, at least Brienne got one moment of pure joy when she received the title of knight, making her the first official lady knight in the history of the Seven Kingdoms. (The whole episode was aptly titled “A Knight of the Seven Kingdoms,” too.)

Naturally, fans of Brienne could not have been more excited to see how it all went down. 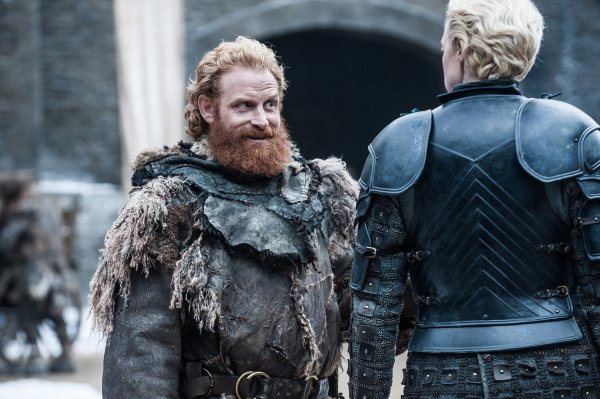 The Internet Is in Agreement. Tormund Is the Mood-Lightening MVP of Game of Thrones
Next Up: Editor's Pick