Everyone on Game of Thrones Seems Convinced the Crypts Are Safe. Here's Why They Might Be the Worst Place to Be

As Jon and Daenery’s army prepared for the fight against the White Walkers in Season 8, Episode 2 of Game of Thrones, they decided to hide those who cannot or should not fight inside the Winterfell crypts. In fact, several characters spent plenty of time going on and on about just how safe those crypts are on the show.

So yeah, those crypts are probably, definitely not safe. Call them Chekhov’s crypts.

The show has signaled to fans before that the crypts could play an important role in this battle. An early teaser showed several characters walking through the crypts. The first trailer followed Arya as she ran frightened through those same crypts. And the new credit sequence includes a jaunt through the crypts of Winterfell.

Just two episodes in, the crypts have already served as the backdrop for a few major reveals on the show: Sam tells Jon that he is, in fact, the legitimate son of Rhaegar Targaryen and Lyanna Stark in front of Lyanna’s statute in the crypts in the season 8 premiere episode. And in the following episode, Jon reveals his parentage to Daenerys, plus the fact that he is the rightful heir to the Iron Throne, in that same spot just before the Battle of Winterfell begins.

Daenerys is incredulous: She is supposed to give up her power because of the words of Jon’s best friend?

Many fans speculate that those very crypts could produce the evidence needed to prove Jon’s heritage: Some people think that Rhaegar’s legendary harp lies within Lyanna’s tomb or even some dragon eggs are hidden down there. (More on that in a bit.) The crypts could very well be the site of Jon’s ascendency.

But what role will the crypts play in that epic episode 3 fight that interrupted Danerys and Jon’s conversation? One threat seems obvious: All of the Starks are buried there, so it’s possible that if a few White Walkers could make their way into the crypts they could raise the bodies down there and bring them into their army of the undead. That means Jon Snow could face off against a zombie Ned Stark.

The show has already drawn several parallels between the Battle of Winterfell and the Battle of Helm’s Deep in Lord of the Rings. In the latter battle, the humans hold off the orcs until an orc is able to run with a bomb into a passage in the wall and blow it up. The orcs flood in. Similarly, the White Walkers could find the secret passages into Winterfell, make their way to the crypts and raise more soldiers.

Some fans have even asserted that the Night King specifically bee-lined for Winterfell because he wants to raise someone specific that’s buried in the crypts. The Westerosi on the show don’t know how, exactly, men defeated the White Walkers the last time the two groups clashed during the Long Night. They only know that humans drove the White Walkers North and Bran the Builder, a Stark ancestor, erected the Wall to separate them.

According to the theory, Winter literally fell at the place where the Winterfell Castle now stands, and the castle was constructed to contain a being known as “The Great Other.” The Great Other is the Lord of Light’s opposite, a force of darkness, and he could be buried in the crypts. His presence below Winterfell might explain why the crypts are so cold when the rest of Winterfell, built on a hot spring, is warm. Starks have long been told that a Stark must always stay in Winterfell. Is that mythical lore or a literal command because if a Stark leaves Winterfell the Great Other might unleash?

With just four episodes to go, the show doesn’t seem to have enough time to properly set up the Great Other, and Bran revealed in the most recent episode that the Night King is headed for Winterfell specifically to try to kill him, the Three-Eyed Raven. But if dragon eggs are hidden in Lyanna’s crypt, perhaps the Night King wants to create more ice dragons for himself to take on Daenerys’ brood.

Whatever their motivation, it’s almost certain that the White Walkers will use the crypts to their advantage. Hopefully the little girl who promised Davos and Gilly she’d protect the crypts is handy with a sword. 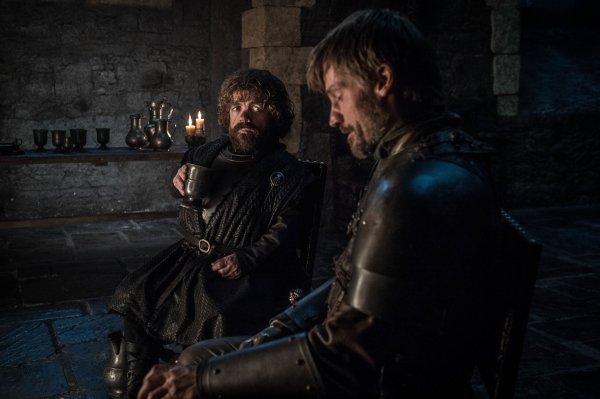 Tyrion and Jaime Gave Us Yet Another Hint About That Cersei Prophecy on Game of Thrones
Next Up: Editor's Pick