Warning: The post contains spoilers for Game of Thrones.

Who will kill Cersei Lannister? The question has weighed heavily on the Game of Thrones’ universe ever since Maggy, a fortune teller, delivered a prophecy to Cersei when she was a child. The show’s fifth season shows Maggy delivering three predictions, including that Cersei would be replaced by a younger and more beautiful queen.

But in George R. R. Martin’s books, Maggy adds one more crucial prediction: “When your tears have drowned you, the valonqar shall wrap his hands about your pale white throat and choke the life from you.”

Valonqar is High Valyrian for “little brother.” Over the years there has been widespread speculation about who the valonqar could be, with most people pointing to one of Cersei’s two little brothers. One is Tyrion, her constant nemesis who has been itching to kill her for several seasons, and another is Jaime, her lover and twin born minutes after her. Both of them have recently been marked by Cersei: she sent Bronn to kill them with a crossbow after they both defected to serve Daenerys in Winterfell.

However, it’s not specified whether the valonqar refers to her younger brother or simply any younger brother. This ambiguity means that Westeros’ other powerful younger brothers–including the Hound, Jon Snow, Bran, Arya wearing someone else’s face, Euron, or even Cersei’s unborn baby–could be candidates to bring her down.

But “A Knight of the Seven Kingdoms,” the most recent episode of Game of Thrones slyly provides two hints that point to Tyrion, the most obvious option, being the valonqar. In the show’s opening moments, Jaime stands before the powers of Winterfell, who decide whether or not to set him free. When Tyrion vouches for Jaime’s trustworthiness, Daenerys responds by echoing the words of Maggy: “Perhaps he trusts his little brother to defend him, right up to the moment he slits my throat.”

After Brienne’s unwavering words of support lead Jaime to walk free, he joins Tyrion on the battlements of Winterfell; they talk about the relationships with Cersei and their likely impending deaths at the hands of the White Walkers. As is often the case with Tyrion, he delivers a cheeky joke that also contains kernels of truth:

That would certainly be a grim realization of the prophesy: a zombified Tyrion, marching to King’s Landing alongside thousands of other wights, and killing Cersei not out of revenge or self-protection but an unconscious lust for death. This theory will likely either be set into motion or debunked in the next episode–which will cover the Battle of Winterfell. 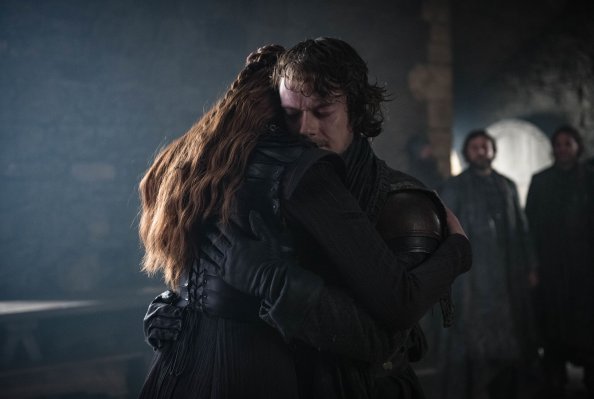 Is Game of Thrones Trying to Romantically Pair Sansa and Theon?
Next Up: Editor's Pick