Hasan Minhaj has not targeted his top Presidential contender among the candidates yet.

And while he knows who he’d want to interview on his Netflix show, there is just one tiny problem – the top choice is among the few people who have not jumped into the presidential race.

“It will be interesting to see how everything shapes up, things are changing so fast,” the comedian told TIME at the 2019 TIME 100 gala Tuesday. When TIME asked about the one he wants on his show, he said it’s the one he described as the “future Presidential candidate;” Dwayne “the Rock” Johnson.

Minhaj was among the honorees of Time’s 2019 most influential people who attended the gala in New York City in Lincoln Center. He was the last correspondent Stewart hired before he retired as the host of the Daily Show in 2015. Minhaj left the Daily Show in 2018. He now hosts his own weekly show on Netflix, Patriot Act with Hasan Minhaj, where he discusses everything from student loans to immigration to the Indian elections.

Trevor Noah, who succeeded Stewart, wrote Minhaj’s tribute for the 2019 TIME 100, highlighting how important his perspective is, as well as the importance of having a Muslim-American in a high profile position. “We’ve needed Hasan’s voice since Donald Trump came down that golden escalator and turned immigrants and Muslims into his targets,” Noah wrote.

Minhaj did not reference Trump directly in his interview with TIME, but did specify the need for comedy in tumultuous times. “When things are really crazy, comedy is the only thing that can break the tension,” he said. 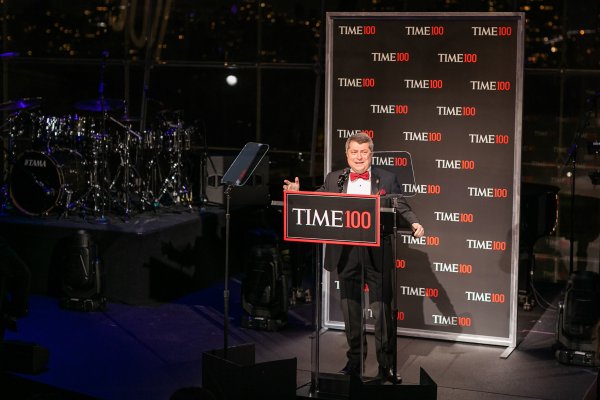 TIME CEO Edward Felsenthal Toasts 'People Who Do the Impossible' at TIME 100 Gala
Next Up: Editor's Pick