The White Walkers have haunted the heroes of Game of Thrones since the show’s very first episode. They kill men and bears and even dragons and turn them into ice zombies that join the ranks of their army. But it’s never been clear what the White Walkers, or their leader the Night King, actually wanted to achieve on the show. Bran Stark finally offered his compatriots — and desperate fans — an answer on the second episode of season 8 of Game of Thrones.

During a strategy meeting for the impending Battle of Winterfell, Jon tells the group that if the Night King falls, his entire wight army might fall too. Bran suggests offering himself up as bait to lure the Night King toward Daenerys’ dragons. “He’ll come for me. He’s tried before, many times with many Three-Eyed Ravens,” Bran says. Remember, the Night King came after Bran and killed the Blood Raven earlier in the show.

Sam wisely asks Bran, “Why? What does he want?” This has long been a mystery in the Game of Thrones series: The Night King has never uttered a line or explained why, exactly, he is attacking the living. (Showrunners David Benioff and D.B. Weiss have suggested that the character will never speak.)

“An endless night,” Bran replies. “He wants to erase this world. And I am its memory.”

Given that Bran tends to be pretty brief these days, Sam elaborates. “That’s what death is, isn’t it? Forgetting. Being forgotten,” he says. “Your memories don’t come from books. Your stories aren’t just stories. If I wanted to erase the world of men I’d start with you.”

Remembering history so as not to repeat it has been a major theme of this season of Game of Thrones: The first episodes of the eighth season had many parallels and references to the very first episode of the show. The series has suggested that those who do not learn from their past are doomed to repeat it, which given the mortality rate on Game of Thrones would be quite dire.

Bran’s job as the Three-Eyed Raven is to remember (and see) all of history — not a biased version that men write in history books, but the actual truth. By destroying Bran, the Night King essentially would destroy the very history that sustains man and helps him to evolve.

Bran hinted at this potential fate hinted at early in the episode when he tells Jaime he’s not angry with him for pushing him out of a window and paralyzing him in the very first episode. When Jaime asks why Bran didn’t tell anyone, Bran simply says: “You wouldn’t be able to help us in this fight if I let them murder you first.” Jaime responds by asking what happens after the battle. Bran’s simple response: “How do you know there is an afterwards?”

Jaime and Bran finally talk in the godswood on Game of Thrones.
Helen Sloan/HBO

This is especially curious considering that while Bran offers himself up as bait, he references the mark on his arm from when the Night King touched him during season 6. Bran visited the White Walkers while greenseeing that season, not realizing that the Night King could see him until the villain reached out and grabbed his arm. After Bran returned to his place inside the Tree, the Three-Eyed Raven said the Night King could invade their home. Seconds later, White Walkers entered the tree and killed Summer, several Children of the Forest, the Three-Eyed Raven and, most memorably, Hodor.

Since this, fans have suspected that the Night King might specifically want to kill Bran. Night King actor Vladimir Furdik let slip to Entertainment Weekly that his character “has a target he wants to kill.”

And the Night King may very well succeed. After Bran shared his strategy with the rest of the group, Tyrion sat down with Bran and asked him to share the long story of how he became the Three-Eyed Raven. Tyrion clearly learned something from that conversation that could be useful before the end of the series. Now that Tyrion knows some of Bran’s secrets, does that meet Bran might meet an untimely end? Bran will have Theon to guard him, so depending on your faith in Theon that could be an encouraging or terrible sign of things to come. 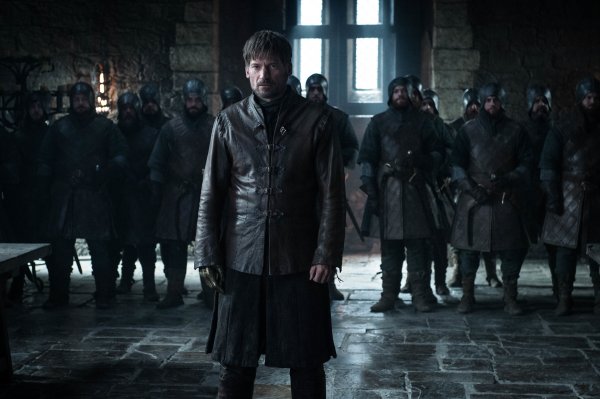 It Looks Like the New Game of Thrones Photos Tease a Long-Awaited Confrontation
Next Up: Editor's Pick