What a Watergate Expert Thinks of the Mueller Report

The release on Thursday of a redacted version of Robert Mueller’s full report on the Russia probe represents a major moment in the history of special counsels in the United States — but no use of that office looms as large in the American imagination as the investigation into Watergate.

That outsize influence makes sense: President Richard Nixon’s resignation amid that probe remains the only instance of a U.S. President stepping down. As Watergate remain a touchstone for any investigation into a President’s actions, so it’s no surprise that the release of the Mueller report has already drawn numerous comparisons to that history.

So what lesson does that history offer for this moment?

Ken Hughes is the author of Chasing Shadows: The Nixon Tapes, the Chennault Affair, and the Origins of Watergate and Fatal Politics: The Nixon Tapes, the Vietnam War and the Casualties of Reelection, and a research specialist at the Miller Center at the University of Virginia. As part of a presidential-history partnership between TIME and the Miller Center, Hughes shared his first impressions on the Mueller report.

TIME: What were your initial impressions from what you’ve read of the Mueller report?

I was just struck by how many echoes there were of the kinds of activities that got Clinton impeached and would have gotten Nixon impeached if he hadn’t resigned first. It’s interesting — apparently some members of the Trump Administration also heard echoes of past impeachment proceedings. There’s a passage about [former] White House counsel Don McGahn getting a call from Donald Trump asking him to have the special counsel ousted. It says McGahn did not carry out the instruction for fear of being seen as triggering another Saturday Night Massacre. The difference was that back in 1973 the president followed up and the Attorney General and his deputy resigned rather than oust the special prosecutor. But this time the President did not follow up so Mueller wasn’t ousted.

One thing that jumped out at me, thinking about the history, is that Mueller chose near the end of the report to note that it is a “fundamental principle of our government that ‘[n]o [person] in this country is so high that he is above the law,'” and to trace that quote through both the Nixon and Clinton cases.

I’ve been reading a lot about how no matter what the report says, Congress is not going to act on it. Republicans are afraid that that they will lose their jobs to primary challengers, and Democrats remember how impeachment proceedings against Bill Clinton backfired and actually turned people against the impeachers. So both sides of the aisle fear political repercussions. But we all lose something much more important if Congress abandons its historic responsibility to hold presidents accountable for obstruction of justice. It erodes the standard of the rule of law by basically giving the president impunity, and I think that’s a much greater loss than anyone’s reelection campaign.

Are there any other ways in which you think our modern experience with impeachment will affect how this process plays out?

Well, the situations are different. When Nixon was President there was a Democratic House and Senate, and so the majority was at least willing to hold the President accountable, though rather reluctant to challenge a president who was so popular and also rather reluctant to engage in impeachment proceedings, simply because they are very divisive. One of the commonalities between the 1970s and now is that about 40% of the country, no matter what the evidence was, thought Nixon was being railroaded. Even when the tapes came out, it didn’t matter how many people went to prison, Nixon still had the support of the Republican base. And during the period of Clinton’s impeachment proceedings, the Republicans controlled the House and the Senate, so again you have the President and Congress being of opposite parties.

Some people have theorized that our state of polarization these days may get in the way of the process. It sounds like you’re saying that that’s maybe an overoptimistic view of the past, and in fact this process has always existed in a political context. Is that fair?

Yeah. I don’t consider it polarization in the ’70s because the parties were so diverse; the most conservative Democrats were more conservative than the most conservative Republicans. It wasn’t polarized but it was partisan, and that is a consistent thread. Nixon in public behaved very differently from President Trump. He made many public gestures of respecting the process and of respecting officials who ruled against him, Judge Sirica and so forth. But also with Nixon you saw the beginning of an attempt to delegitimize the institutions that moved against him. He very much worked on delegitimizing the news media by accusing it of liberal bias and he also did the same with Democrats in Congress.

Is there anything else you think someone who knows a lot about Watergate might see in a unique light, or where that context adds a layer?

These things take time. The first day’s stories will not get to all of its depths. It’s a long, drawn-out process, determining whether a president has committed obstruction of justice. It’s not something we can necessarily instantly see. Although I have spent the whole day commenting on the report, I would recommend that instead of paying attention to the comments, people actually read the report. There’s a lot there. It’s interesting and it’s also vital to the functioning of the republic.

Was that also the case in the 1970s, that things came out over time?

I think the problem was always that people wanted to know what does it all mean, what’s the bottom line, and there often isn’t one. For me, with Watergate, the thing that people focused on — the Watergate break-in — was the least important part. What was most important for us to find out was Nixon’s extensive abuses of power. It’s hard to picture obstruction of justice. It’s not like breaking into somebody’s office and bugging it; everyone can form a mental picture of what that is, but obstruction of justice is complicated.

Now that you’ve just said it’s complicated, how would you sum up Nixon’s abuses of power in this sense?

Do we know from the tapes if there was some one big moment where Nixon realized he was in trouble?

He was not in Washington at the time of the break-in so we don’t have his initial reaction, but we do know as soon as he returned to Washington, he was obstructing justice. He was doing what he could to ensure that the investigation did not go beyond the Watergate break-in itself, and there are a lot of conversations in which he does that. For him it was a very quick decision — and not an agonizing one. 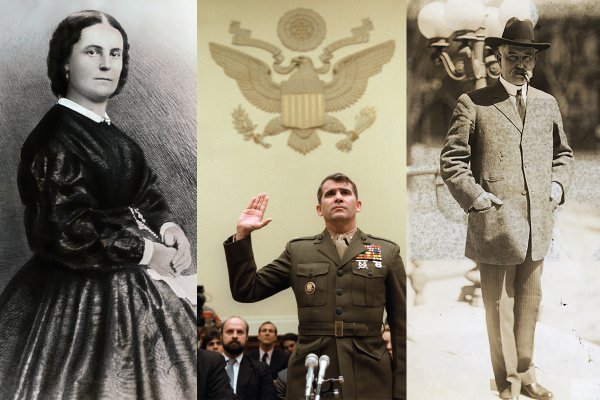 What Was the Biggest Political Scandal in American History? 7 Historians Make Their Picks
Next Up: Editor's Pick