Beyoncé performs during the 2018 Coachella Valley Music And Arts Festival on April 14, 2018, in Indio, Calif.
Larry Busacca—Getty Images for Coachella
By Crystal A. deGregory

The well-received release on Wednesday of Beyoncé’s documentary Homecoming has sparked interest in the Historically Black Colleges and Universities (HBCUs) to which she pays tribute throughout the film. “I always dreamed of going to an HBCU,” she says, and the Coachella performance at the center of Homecoming was a musical and visual homage to those institutions. Even the film’s title references the most beloved tradition of HBCUs.

This moment — a worldwide celebration of HBCU culture — has been more than one and three-quarter centuries in the making. But the feeling of unity expressed by Beyoncé’s loving tribute goes even deeper than viewers may know: throughout that history, HBCUs have contributed to every sphere of American life.

Despite their history formally beginning with the founding of Cheyney University of Pennsylvania in 1837, most stories of HBCUs start in the wake of the Civil War, with the vast majority of successful institutions largely dependent on interracial or white political and philanthropic leadership.

The passage of the Morrill Land Grant Acts of 1862 and of 1890, in providing for the creation of land-grant colleges in the United States, forced the creation of a handful of public black colleges in the former slave states. The names of these schools — from Florida A&M to Tennesse A&I — speak to the circumstances of their creation by reflecting their agricultural, industrial, mechanical and technical instructional philosophies. Even with their prodigious histories and contemporary successes, these HBCUs are arguably less well known than their private liberal arts counterparts. Most of these schools — for example, Shaw, Fisk, Howard, Morehouse, Meharry, Spelman and Wiley colleges — are the namesakes of their white former Union Army benefactors.

Still, the principal cause of the founding of the freedmen’s schools that would become black colleges was the desire and demand of black people for educational opportunities. Their establishment during Reconstruction, the too-brief post-war period of federal support for the flourishing of black life in the South, helped to constitute what Fisk University graduate W.E.B. Du Bois — who was also the first African American to earn a Ph.D. from Harvard University — dubbed “a moment in the sun.”

Their impact was immediate. And as Jim Crow took hold and codified second-class citizenship via law and custom, it became clear just how crucial the HBCUs would be.

The formerly enslaved Booker T. Washington worked his way through what is now Hampton University and almost single-handedly raised what is now Tuskegee University out of the Alabama Black Belt. The practice of oversimplifying the debate over liberal arts versus industrial training philosophies, and subsequent negative characterizations of Washington’s contributions to Black America, have largely reduced his story to being the presumed ideological nemesis of Du Bois — but Washington knew all too well that the once-fractured nation’s commitment to black lives was a moment that would not last long. This was true even in 1900, when Atlanta College alumnus James Weldon Johnson, along with his brother J. Rosamond Johnson, gave African Americans the confidence to “lift every voice and sing,” writing the song that would become known as the Negro National Anthem, even as the long arm of white supremacy lynched black bodies from Southern trees like strange fruit.

The truly robust black college intellectual tradition of the turn of the century extends to black women like writer and anti-lynching activist Ida B. Wells (an alumna of what is now Rust College in Mississippi) and feminist Anna Julia Haywood Cooper (an alumna of what is now Saint Augustine’s University). Black college women’s contributions also include the remarkable story of Mary McLeod Bethune. The 15th of 17 children born to formerly enslaved persons, Bethune, who attended Scotia Seminary, founded the Literary and Industrial Training School for Negro Girls in Daytona, Fla., with just $1.50 and six students in 1904.

In a tradition stretching from Tuskegee scientist George Washington Carver to the Tuskegee Airmen, black colleges offered wartime leadership in critical areas such as military service and science, as well as its innovations in agriculture and engineering.

Similarly, black colleges were central to student protest, particularly in Southern cities like Atlanta and Nashville. Many icons of the modern civil rights movement — including Martin Luther King Jr., Bayard Rustin, Jo Ann Robinson and Rosa Parks — are among the ranks of HBCU alumni.

HBCUs, since then, have continued to do what they have always done: leading in the classroom, on the gridiron and in the dynamism of their bands and majorette dance lines. And every so often, they enjoy a moment like this one, when they capture the American popular imagination with the display of their embodiment of an unapologetic and unrepentant blackness — a blackness that defies the confines of black respectability and ignores the implications of white gaze.

Even in an era when philanthropic support for HBCUs pales in comparison to the mega-gifts to their historically white counterparts, and when white supremacist attacks are on the rise, HBCUs offer hope of black social, economic and political resurgence. They retain their founding mission of educating the best and the brightest just as proudly as they do underprivileged long-shots. They also retain their post-Reconstruction role as ports in the storm of prejudice — which should perhaps come as no surprise. After all, the black students and schoolmasters who ensured the persistence of HBCUs, through the toiling of their hands and the application of their minds, and despite the enshrinement of racial inequality, shepherded a sense of black potential in American life. More than a century later, as Homecoming clearly demonstrates, that sense of possibility endures.

Crystal A. deGregory is the founder of the HBCUstory and an associate professor of history at Kentucky State University. 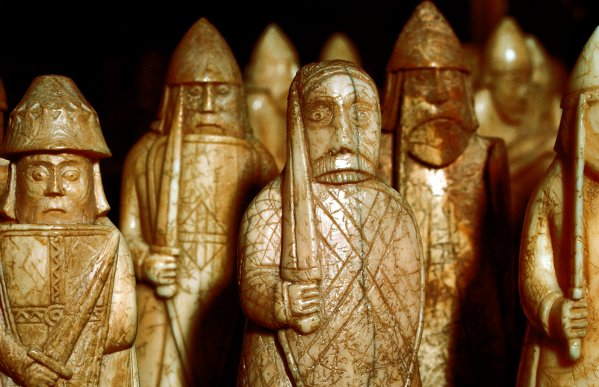 White Supremacists Have Weaponized an Imaginary Viking Past. It's Time to Reclaim the Real History
Next Up: Editor's Pick