As the refugee crisis widens across multiple continents, prominent musicians like Coldplay, the RZA and Amanda Palmer have released songs and music videos that grapple with issues of displacement and immigration. On Thursday, Carnage, a DJ and producer, added one more to the growing canon: “Letting People Go,” a music video that traces the journey of a family from their Nicaraguan hometown to a U.S. detention center.

But Carnage’s aims are not just to comment on politics or empathize with the plight of others. His motivation is deeply personal. Carnage, born Diamanté Anthony Blackmon, grew up in Guatemala and came to the U.S. as a child who did not speak English. A generation before him, his grandmother and mother illegally immigrated to the U.S. and were detained and separated in one of the same Texas border cities where migrants are being held today.

“I feel so bad because my own family went through this,” Blackmon said in an interview with TIME. “All this stuff happening now is getting back to my own life.”

For the last five years, Blackmon has been a prominent DJ and producer in the hip-hop and electronic music worlds. He made songs with Young Thug, Migos and Mac Miller; this week, Drake brought him out during one of his concerts in Amsterdam.

Blackmon frequently played at raucous electronic festivals like Ultra and Tomorrowland, but was forced to reckon his bacchanalian and largely apolitical mindset following the death of his friends Miller and Avicii, both of whom struggled with mental health issues. “It made me double-think about everything I was doing: the partying, not sleeping, the exhaustion,” he said. Conversations with his family over Thanksgiving about President Trump’s detention policies furthered his interest in engaging with difficult subjects; he created “Letting People Go” with the indie-pop trio Prinze George as a conscious departure. “This wasn’t made for festivals,” he said.

The song’s music video depicts a family of four as they travel from Nicaragua to Guatemala through Mexico to the U.S. border. They ride in smugglers’ vans, walk for miles across the desert and run from the Border Patrol agents who chase them before eventually being placed in cages in a detention center in McAllen, TX. Blackmon’s grandmother went through a similar ordeal: In the 1970s, she fled the vicious bloodshed of the Nicaraguan Revolution with her five children. “It was unbearable to live like that,” he said. “Businesses were being shut down. When my family was fleeing Nicaragua, people were trying to shoot at their car.”

When Blackmon’s family reached the United States border, Blackmon says they were caught, detained and separated by gender. His uncle, who was four or five at the time, was forced to spend 18 hours by himself. “He was crying, and my grandma was going crazy,” he said. “They were treated like dogs.”

Carnage was born in Washington D.C. but spent most of his childhood living in Guatemala with his aunt while his mother attended school. He often visited Nicaragua, his family’s home country. After he achieved fame and financial success, he built two schools there. “I want to give back to the countries that raised me, that made me who I am. I’ve seen the struggle,” he said.

The DJ and producer Carnage, right, with his grandmother.

Blackmon hopes that the “Letting People Go” video will raise awareness and funds to support the current set of migrants who flee similar unrest and arrive at the border to face President Trump’s detention and separation policies. A portion of proceeds will be donated to the Raices Foundation, a nonprofit that offers legal aid to immigrant families and refugees. “Why are we separating families when they’re running away from terrible things that we don’t our own families to go through?” he said. “Seeing history repeat itself—we can’t allow this to happen.”

There are a growing number of artists around the world using their platforms to elevate the struggles of migrants. M.I.A., a former refugee herself, released the incendiary music video “Borders” in 2015. 21 Savage, an undocumented immigrant who was detained by ICE, rapped about “kids stuck at the border” in an extended version of his song “a lot.” And Mexican artists like Los Tigres del Norte and Calle 13 have been singing about immigration for years.

Blackmon says he hopes to wield his platform alongside the other minority artists he knows in the music industry—from Lil Pump to Drake to Steve Aoki—to continue to raise awareness about immigrant struggles. “I’m going to stand up for what my family went through,” he said. “The next step is to see how we can build a bigger collection of people to join the wave.” 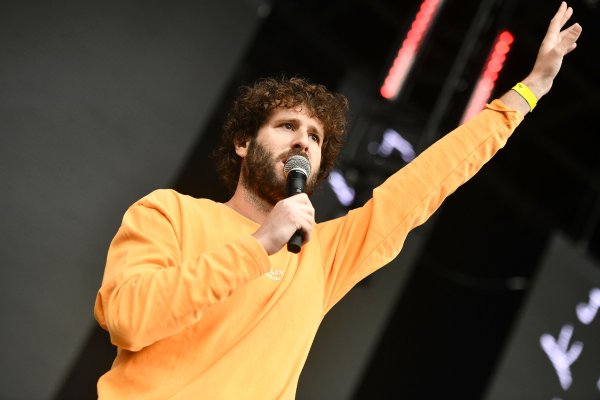 Here’s Why Lil Dicky Recruited Top Performers for 'Earth'
Next Up: Editor's Pick