Volodymyr Zelensky candidate for the post of President of Ukraine during the concert program of the studio "Kvartal 95" on March 13, 2019.
Aleksandr Gusev/Pacific Press -LightRocket via Getty Images
By Ian Bremmer

What Happens This Week:

Because it’s Ukraine. For better or worse, Ukraine is the bridge that unites—or divides, depending on your perspective—Russia with the West. A decade ago, Ukraine was making moves toward joining the EU without sacrificing its substantial trade and interpersonal ties to Russia. Then Moscow’s 2014 landgrab of Crimea and sponsorship of a war in the Donbas valley resulted in a frozen conflict that remains in place to this day. Unsurprisingly, both candidates have been fiercely critical of Moscow on the campaign trail, though not exactly in the same way (see below).

But before Russia, there’s domestic politics to consider—Ukraine’s politicians never cleaned up the systemic corruption that fueled the 2014 Maidan Revolution that ousted Ukraine’s Kremlin-friendly president Viktor Yanukovych. His eventual successor (and current presidential candidate) Petro Poroshenko came to power promising to navigate the country through what was then a rising conflict in the east and revive the country’s economic fortunes. He’s had difficulty convincing Ukraine’s voters he’s been successful on all those fronts—Russia remains a direct security threat (even if the conflict has cooled and now is largely stuck in place), Ukraine’s economy is struggling, and no top-tier government officials have been convicted on corruption charges. In the eyes of many Ukrainians, the billionaire Poroshenko is a remnant of the very system the 2014 Revolution was meant to break.

Enter: Volodymyr Zelenskiy, a true political outsider whose political experience comes from his TV show “Servant of the People,” in which he plays a school teacher whose outburst against corruption becomes an internet sensation and thrusts him into the country’s presidency. Zelenskiy named his political party after the show and he hit the campaign trail, where his charisma and media experience have made him a political force to be reckoned with. Zelenskiy has also opted to go heavy on the anti-corruption rhetoric while going light on specific policy proposals, allowing him to be many things to many Ukrainians fed up with the country’s politics. That does not mean he is without controversy—his political opponents accuse him of being financially-backed by a Ukrainian oligarch at odds with Poroshenko, and who happens to own the TV station that Zelenskiy’s show runs on. He also says he will end Ukraine’s conflict with Russia through direct dialogue (“I am ready to do a deal with the devil so that not one more person dies”); critics are skeptical on that count. Nevertheless, Zelenskiy won the first round of Ukrainian presidential elections decisively, taking 30.2 percent of the vote to Poroshenko’s 15.9 percent. The last three weeks have been filled with personal attacks between the two men as the campaign approaches the finish line.

Ukraine is set to elect Zelenskiy as Ukraine’s next president this weekend; a poll released last week had Zelenskiy at 61 percent, while Poroshenko clocked in at 24 percent. Zelenskiy has been stocking his team with genuine economic and political reformers, a sign that he has ambitious plans to follow through with his headline promise of “change.” But here’s the thing—Ukraine has parliamentary elections scheduled for this fall, and any genuine reforms will require legislative backing. So the success of Zelenskiy’s reform drive will depend in large part on the outcome of those elections. Speaking of…

Given Russia’s proclivity for interfering in foreign elections—in addition to the outsized interest that Russia takes in Ukrainian affairs—one would assume that Moscow is working overtime to swing this election. Problem is that the only candidate who the Kremlin clearly wanted to back (Yuriy Boyko) didn’t stand a chance of winning given broad anti-Russian sentiment throughout the parts of Ukraine still under the Ukrainian government’s control. Instead, the Kremlin’s efforts have focused on delegitimizing the electoral process in general. For active meddling and preferred candidates, tune in for parliamentary elections this fall, where there is much more space to influence outcomes given the number and variety of politicians likely to stand.

91% of Ukrainians believe their government is corrupt. Pretty hard to win reelection when you’re the president presiding over that government.

For more color on the Ukrainian elections, read this piece in Time.

Voting in Ukraine tends to fall along the traditional fault lines of ethnicity and language. Zelenskiy’s first round victory crashed through those barriers as he picked up votes from a broad swath of the electorate. Let’s see if he keeps it up this weekend; if he does, we may be looking at a new era of Ukrainian politics.

Populism is the talk of the town in Western politics. It’s probably not the best framework to apply to understand what’s happening in Ukraine; Zelenskiy is clearly against the establishment, but it’s not clear what policies he will oversee once in office. So be cautious describing him as a “populist.” 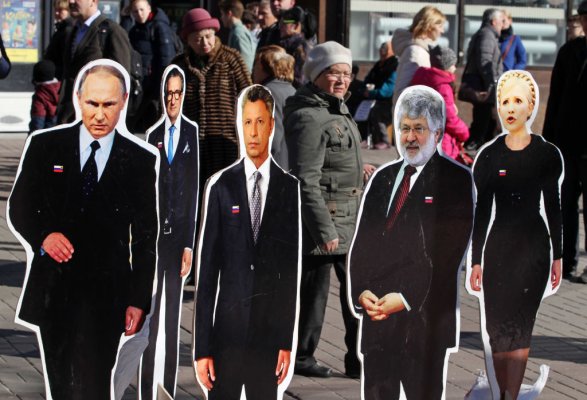 Ukraine Goes to the Polls on Sunday. Can Its Next President End the Frozen War With Russia?
Next Up: Editor's Pick