President Donald Trump and his team celebrated the publication of Special Counsel Robert Mueller’s report Thursday despite a wealth of damaging new details.

“I’m having a good day,” Trump said at a Wounded Warrior event in the East Room of the White House less than an hour after the report was released. “It’s called no collusion, no obstruction.”

Mueller’s report did not find evidence that Trump or any members of his campaign conspired with Russia in its efforts to influence the 2016 election. Mueller did not render a judgment on whether Trump obstructed justice despite probing a host of possible examples. Attorney General William Barr and Deputy Attorney General Rod Rosenstein then determined there wasn’t sufficient evidence to establish that he did.

Members of Trump’s legal team made a few surprising decisions that demonstrated their willingness to let the report speak for itself. In recent days, White House lawyers made the unusual determination not to assert executive privilege over any aspects of the report, Barr confirmed Thursday.

Then, after spending months preparing a rebuttal to the report, members of Trump’s personal legal team decided not to release it on Thursday, attorney Jay Sekulow confirmed to TIME. It’s not clear if they will release it in coming days; another of Trump’s personal lawyers Rudy Giuliani was talking about the counter-report as recently as Thursday morning.

The actions by White House officials and allies on Thursday were the culmination of two years of Trump repeatedly proclaiming “no collusion,” and weeks of Trump insisting that he wanted the public to see the full report.

Kellyanne Conway, Trump’s former campaign manager and now counselor at the White House, told reporters in the White House driveway on Thursday that this was “really the best day since he got elected.”

“It’s time to move on, total exoneration, the President’s in a great mood,” Conway said, adding that the president spent part of the morning watching Barr’s press conference and talking to his lawyers, as members of the White House went through the more than 400-page report “bit by bit.”

The lengthy report is far from the “total exoneration” that Conway and other members of the White House claim. The investigation turned up numerous encounters and actions that range from politically embarrassing to potentially highly damaging for the President and his allies.

The document details a vast web of connections between the Trump campaign and Russia: Trump associates met with Russians more than 100 times. There are numerous instances in which Mueller’s team caught Trump aides or allies lying to the public about aspects of the investigation. At one point, White House Press Secretary Sarah Sanders acknowledged to investigators that when she told the press after Trump fired former FBI Director James Comey that she had heard from “countless” FBI agents who had lost faith in Comey, those comments “were not founded on anything.”

Mueller also detailed multiple instances of Trump pressuring those around him in regard to the investigation. “The President’s efforts to influence the investigation were mostly unsuccessful,” according to the report, “but that is largely because the persons who surrounded the President declined to carry out orders or accede to his requests.”

When asked about this assertion, Conway said, “That’s punditry. That’s actually not a sophisticated legal analysis.”

Some members of Congress have a different view, and Democratic House Judiciary Chairman Jerrold Nadler illuminated in a statement why this portion of the report could still be dangerous for Trump. “The Special Counsel made clear that he did not exonerate the President,” Nadler said. “The responsibility now falls to Congress to hold the President accountable for his actions.”

“Whether these acts are criminal or not,” Democratic House Intelligence Committee Chairman Adam Schiff said later in the day, they are “dishonest, unethical, immoral and unpatriotic.”

For the White House, allowing these details to come out without attempting to redact them under claims of executive privilege or immediately rebut them may have been in service of the larger defense. It would have been “difficult for [the White House] to make heavy redactions and to assert the executive privilege widespread over the report while saying that this is a complete exoneration and there’s nothing to see here,” Molly Claflin, chief oversight counsel at American Oversight, told TIME before the report was released.

Trump supported this line of thinking in a tweet he fired off aboard Air Force One Thursday evening. “I had the right to end the whole Witch Hunt if I wanted,” the president wrote. “I could have fired everyone, including Mueller, if I wanted. I chose not to. I had the RIGHT to use Executive Privilege. I didn’t!”

Trump will spend Easter weekend at his Florida property Mar-a-Lago with a close circle of aides, including White House counsel Pat Cipollone. He emerged from the White House holding hands with the First Lady and the two boarded Marine One just after 4:15 pm, without stopping to take questions from the press. 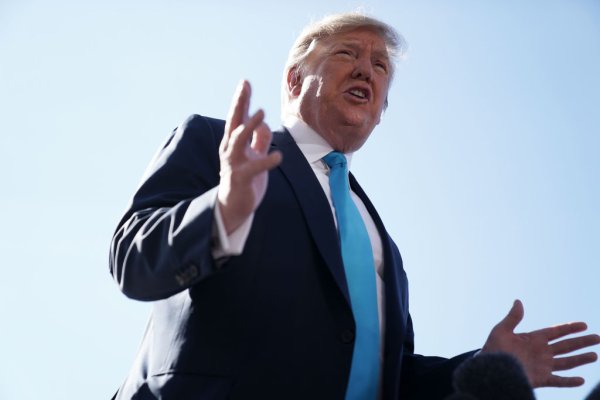 All the Ways Trump May Have Obstructed Justice
Next Up: Editor's Pick