Obstruction of Justice Usually Happens Behind Closed Doors. But Trump's Actions Were Public

President Donald Trump called for people investigating him to be fired, attempted to intimidate unfriendly witnesses and praised others for not cooperating with law enforcement.

If he’d done those things behind closed doors, they would likely be textbook examples of obstruction of justice.

But Trump’s actions were public — in tweets, TV interviews and press conferences — and often came at the same time that he was making private arguments along the same lines, according to Special Counsel Robert Mueller’s report.

Experts say that makes the legal judgement more murky, since it’s hard to discern whether Trump was actually obstructing justice, just making a political argument or letting off steam.

“The standard way of discerning content to conspire is muddied,” says Matthew Schmidt, a political science professor and expert on Russia at the University of New Haven. “The boldness invites credulity over whether he could really mean what he says. The thing is … if he had said these things privately in recorded phone calls, he’d more easily meet the legal standard because that kind of communication is what prosecutors and the public expect.”

In some cases, even people who worked for Trump appeared not to take some of his statements all that seriously, since they didn’t follow through. As Mueller notes, Trump’s efforts to influence the investigation were mostly unsuccessful “largely because the persons who surrounded the President declined to carry out orders or accede to his requests.”

Read More: Here Are All the Ways Trump May Have Obstructed Justice

Here’s a look at how Trump publicly meddled with the investigations.

Targeting the people investigating him

In private, Trump was antagonistic toward law enforcement officials investigating him or people around him. As president, he fired FBI Director James Comey, urged Attorney General Jeff Sessions to un-recuse himself from overseeing the Russia investigation, asked Sessions to resign and twice told a White House lawyer to fire Special Counsel Robert Mueller.

But it was hardly a secret that he didn’t like his investigators.

Trump regularly criticized Comey, Sessions and Mueller in public, specifically lamenting that Sessions had recused himself and arguing that he could fire Mueller if he wanted.

The private and public criticism often came very closely together. In one instance from July of 2017 documented in the Mueller report, Trump met with former campaign manager Corey Lewandowski, asking him to send a message to Sessions that he should reverse his recusal and limit the investigation to future Russian election meddling.

As Mueller noted, “within hours of the President’s meeting with Lewandowski,” he gave an unplanned interview to the New York Times in which he also criticized Sessions for recusing himself.

“Well, Sessions should have never recused himself, and if he was going to recuse himself, he should have told me before he took the job, and I would have picked somebody else,” he said.

Read More: Mueller Would Not Say Whether Trump Obstructed Justice. Here’s Why

After Trump’s longtime personal lawyer, Michael Cohen, began cooperating with Mueller’s investigation, Trump publicly criticized him, calling him a “rat” and suggesting that his father-in-law had committed crimes.

After it was reported that Cohen would testify before Congress, Trump again went on the attack. In an interview on Fox News on Jan. 12, Trump again singled out Cohen’s father-in-law.

“In order to get his sentence reduced, he says, ‘I have an idea. I’ll tell — I’ll give you some information on the president.’ Well, there is no information,” Trump said. “But he should give information maybe on his father-in-law, because that’s the one that people want to look at. Because where does that money — that’s the money in the family.”

Cohen postponed his testimony, citing threats against his family.

The evidence supports the idea that Trump “turned to attacks and intimidation to deter the provision of information or undermine Cohen’s credibility once Cohen began cooperating,” Mueller wrote.

Praising associates who did not cooperate

Trump also regularly praised associates who did not cooperate with the Mueller investigation, saying they were good people who would not “flip” on him. His lawyer, Rudy Giuliani, regularly talked about the possibility of issuing presidential pardons to key players in the investigation in TV interviews.

For his part, the president said it was “too early” to talk about pardons, but also said they were “not off the table” for people like former campaign chairman Paul Manafort.

The president’s team appeared to send similar messages behind the scenes as well, according to the Mueller report.

“In January 2018, Manafort told [deputy campaign chairman Rick] Gates that he had talked to the President’s personal counsel and they were ‘going to take care of us,'” Mueller wrote. “Manafort told Gates it was stupid to plead, saying that he had been in touch with the President’s personal counsel and repeating that they should ‘sit tight’ and ‘well be taken care of.’ Gates asked Manafort outright if anyone mentioned pardons and Manifest said no one used that word.”

Cohen recalled that a friend of Trump’s “reached out to say he was with ‘the Boss’ in Mar-a-Lago and the President had said ‘he loves you’ and not to worry,” while another person who worked for the Trump Organization told him “the boss loves you,” and another friend of Trump’s said “everyone knows the boss has your back.”

A lawyer for Trump also told Cohen in an email that he had a “Very Very Positive” conversation with the president about him. “Sleep well tonight, you have friends in high places,” he said. 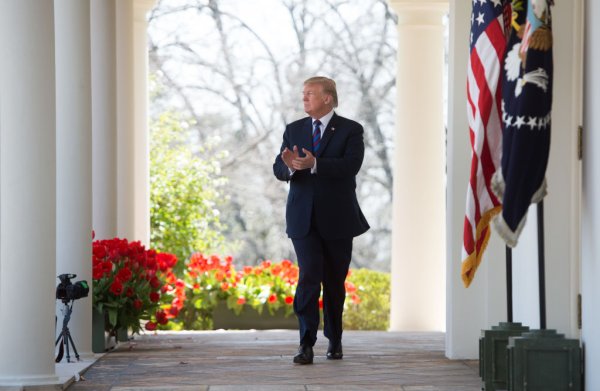 Trump Celebrates Mueller Report, Despite Details
Next Up: Editor's Pick