This week, the news has been all about the Mueller Report. but there’s always a standout silly moment.

One man behind the scenes has become the object of the internet’s attention following a press conference on Thursday morning at the Department of Justice ahead of the report’s release. That’s U.S. Deputy Attorney General Rod Rosenstein. Rosenstein didn’t speak: he was there standing behind Attorney General William Barr, who answered questions from a podium. But Rosenstein still drew eyes thanks to what people felt was a notably stiff countenance, upstaging Barr with his posture.

Barr told reporters that the Mueller Report, which can now be publicly viewed in a heavily redacted version, found no evidence of collusion between Trump’s campaign and the Russians during the 2016 election.

For this week’s TIME 100 list, Rosenstein wrote about Barr and affirmed that under his leadership “the rule of law is secure.”

But now, thanks to his behavior (or lack thereof) at the press conference, political Twitter can’t help but turn Rosenstein into a meme.

He’s even getting compared to Game of Thrones character Bran Stark — the all-seeing Three Eyed Raven, who often sits passively in a corner of any given scene. Only time will tell if the two truly have anything in common. 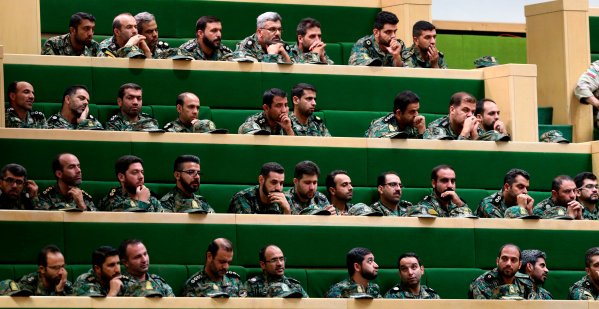 Why Trump’s Latest Move Against Iran Was Pointless—and Dangerous
Next Up: Editor's Pick