He Was a New Teacher at Columbine During the Shooting 20 Years Ago. Here's Why He Never Left.

Kiki Leyba poses for a portrait at the Columbine Memorial site in Littleton, Colo. on April 18, 2019.
Theo Stroomer for TIME
By Katie Reilly

Columbine High School teacher Kiki Leyba remembers April 20, 1999 as a day of two life-altering extremes. He was a first-year Columbine teacher meeting with then-Principal Frank DeAngelis, who had just offered him a contract to continue teaching at the school — his dream job — when gunshots rang out in another part of the building.

He quickly found himself guiding students outside and away from the building, attempting to call 911 on his cell phone but finding the line was busy, overloaded by calls from frantic people.

“That was one of the top-10 best mornings of my life. I was so excited. I was walking on air. I was going to have a career. I’d never had that before,” Leyba says, recalling how quickly the morning turned into a “horrifically tragic afternoon,” as two students killed 13 people in one of the deadliest school shootings in American history.

Leyba, 57, is now one of 13 educators still teaching at Columbine 20 years later, working with students who weren’t even born when the shooting took place, but who have grown up familiar with the routines of gun violence at a time when mass shootings occur with alarmingly frequency in the United States.

In the years since the Columbine shooting, survivors have become educators, parents, therapists and gun control advocates. They’re often called upon to offer their perspectives on school violence and mass trauma, even as many of them still struggle to make sense of what happened in 1999 and have no simple explanations for why it keeps happening today.

“We’ve become the weird grandparents of school shootings, and when they happen, inevitably, people will reach out to us — sometimes it’s media, sometimes it’s communities — to try to understand why is this still happening,” Leyba says. “Why would we know?”

Those who work at Columbine spend their days in a building that was a site of a tragedy for many and that remains a source of dark fascination for others. All the while they confront a drumbeat of threats, some tied to the school’s history — including the one this week, just before the anniversary of the shooting, that forced the high school and several other districts in the Denver area to close for a day.

Leyba had talked to his students in recent weeks about how, as the anniversary approached, they could expect to see more police cars near campus and other safety measures in response to threats, trying to help them understand that “this is weirdly a part of what happens at our school sometimes.” Then, on Tuesday, the FBI launched a massive search in the area in response to a “credible threat” from a woman with an “infatuation” with the Columbine shooting, who had flown to Colorado and purchased a pump-action shotgun and ammunition.

As the search was under way in the county surrounding the school, Leyba’s English class carried on discussing The Alchemist while their cell phones lit up with questions from concerned family members and friends.

A woman walks across an empty parking lot a Columbine High School, Wednesday, April 17, 2019, in Littleton, Colorado, where two student killed 12 classmates and a teacher in 1999.
Joe Mahoney—AP

“Grandparents are texting their grandkids. So I’m like, OK, go ahead and text them, let them know you’re alright, let them know what you’re reading, what classroom you’re in,” Leyba says. “Let them know inside it’s normal, because outside, it doesn’t look like that. The TV cameras show up across the street and more law enforcement shows up, so it looks more ominous.”

He is used to fielding questions from curious students — where was he during the shooting, did he know any of the victims, what was it like coming back to school?

“To them, it’s like history,” Leyba says. “It’s like textbook history. They weren’t born. So they don’t really have any sort of context for that, but they have grown up in this age where they are used to hearing about mass shootings, school shootings, gun violence.”

At Aurora Central High School, which also deployed extra security measures due to the threat on Tuesday, English teacher Heather Martin read updates for her students as the search unfolded and urged them to be safe when they were released for the day. Martin, who was a senior at Columbine in 1999, now walks her students through lockdowns, trying to remain calm for them while imploring them to take it seriously. At times, it’s an unnerving reminder of her own high school experience.

“One day last year, we went on a lockdown for a threat in the building, and I was fine during — kept the kids calm, things were OK, and when I got home, that was when the gravity hit me,” she says. “It was like, ‘Oh my gosh, I just did this again, I just huddled in a small office, just like I was when I was a senior in high school.’ And that’s really overwhelming.”

In the weeks immediately after the Columbine shooting, Leyba helped students in his English classes work through their emotions with writing. He says he never hesitated to return to Columbine.

“I love that place. It was not hard for me to go back,” Leyba says. He had started his teaching career later than usual, after dropping out of high school, earning his GED, and graduating from college at age 34. He was a student-teacher at Columbine when he realized it was where he fit in and where he wanted to begin his career. The 1998-99 school year was his first as a full-time teacher, and he was determined not to let the shooting derail him. “Going back into that next year, I felt such a sense of unfinished business,” Leyba says.

In the months and years that followed, being at Columbine often felt better than being anywhere else.

“It just felt like a lot of really damaged, traumatized people just coming together to be together,” he says. “It was also the place where everyone around you got it. They knew what you were going through. We didn’t have to talk about it. We just knew.”

Two decades later, it still feels that way to him. “This is like a safe place to me,” he says.

Columbine survivor Heather Martin reflects about the upcoming 20th anniversary of the mass shooting at her high school in Littleton, Colorado.
Thomas Peipert—AP

Leyba has stayed in touch with many former students, and some have returned to his classroom to share their stories with a new generation. Both he and Martin have dedicated their time to helping other schools and communities cope with the trauma of gun violence.

Martin — who co-founded the Rebels Project, a nonprofit that offers a support network and trauma resources to survivors of mass tragedy — traveled with Leyba to Connecticut after the 2012 Sandy Hook Elementary School massacre and to Virginia to meet with survivors of the 2007 Virginia Tech shooting.

As the community in Littleton, Colorado prepares to observe the anniversary of the Columbine shooting on Saturday with a day of service and an alumni gathering, some are still frustrated by a lack of progress in preventing similar attacks.

“I think a lot of us are looking at it and saying, OK, we’re done talking about that day. We’re done talking about where we were, how we found out. Now let’s talk about what we can do together, what we can do about it,” says Coni Sanders, whose father, Dave Sanders, was killed at Columbine. She now works with violent offenders as a forensic therapist, aiming to better understand their behavior and save other people from becoming victims. “And I really feel like we had so many opportunities after Columbine. We thought that would be enough for the world to change, and it didn’t.”

Sanders has met with students who survived last year’s shooting at Marjory Stoneman Douglas High School, and she sees their advocacy for gun violence prevention as the future of a movement that started, in many ways, with Columbine. “I feel like I’m handing off the baton,” she says.

The Columbine shooting fundamentally changed the way police respond to active-shooter scenarios. Guidance now dictates that they enter the building to confront the shooter as quickly as possible, active-shooter training is common in schools today, and school buildings are equipped with more high-tech safety features, including security cameras and doors that lock automatically.

“The fact that Columbine was the catalyst for all those things is good,” Leyba says. “But it changes the way we respond. It doesn’t change that it happens, and that’s the hard part.” 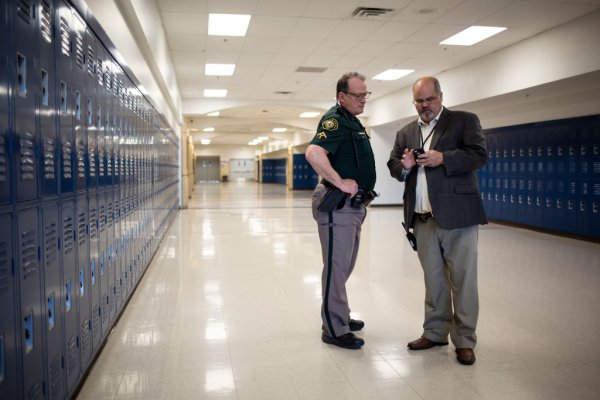