Robert Mueller Told Congress They Can Prosecute the President. Now It Gets Ugly

More than two years after Robert Mueller began investigating whether President Donald Trump attempted to obstruct justice, the special counsel offered the American people a sobering conclusion in his final report, released Thursday: The most powerful law enforcement officials in the country are not in a position to prosecute their boss, the President.

But Congress, Mueller said, is.

Despite witness testimony that Trump tried to get underlings to derail Mueller’s probe and lie under oath, Mueller and his team determined not to make a “traditional prosecutorial judgment” about whether the president violated the law that criminalizes obstruction of justice. That doesn’t mean Trump can do whatever he wants, though. “Congress may apply the obstruction laws to the President’s corrupt exercise of the powers of office,” Mueller wrote. That conclusion, he said, “accords with our constitutional system of checks and balances and the principle that no person is above the law.”

That Solomonic decision left some unsatisfied. For Trump opponents hoping for his ouster, Mueller’s apparent referral to Congress seemed like a punt. For Trump’s backers, it was a source of outrage. But at a moment when Americans see threats of government overreach on the left and the right, Mueller’s restraint has its merits. Rather than reaching to bring down a democratically elected president, Mueller has deferred directly to voters’ popularly elected officials on Capitol Hill.

Which is where things are likely to get ugly.

Attorney General William Barr speaks about the release of a redacted version of special counsel Robert Mueller's report during a news conference, Thursday, April 18, 2019, at the Department of Justice in Washington.
Patrick Semansky—AP

Democrats have heard Mueller’s message loud and clear. “Mueller makes a very powerful argument that the President can be found guilty of obstructing justice and he essentially puts the ball in the court of Congress,” Rep. Jamie Raskin, who sits on the House Judiciary and Oversight Committees, told TIME. The six Democratic chairs of the committees with the broadest oversight jurisdiction are also preparing for battle. “We are profoundly troubled by the astonishing efforts by President Trump identified in the report to obstruct the investigation, including his attempts to remove the Special Counsel and encourage witnesses to lie and to destroy or conceal evidence,” they wrote in a joint statement Thursday evening. “It must fall to Congress to assess the President’s improper, corrupt and immoral conduct in an effort to obstruct the investigation.”

Republicans for their part, are preparing to counter a new round of Democratic investigations with attacks of their own. Trump supporters are claiming Mueller’s refusal to prosecute Trump is vindication. “It seems nothing will stop Democrats in Congress from trying to get the President at all costs,” tweeted GOP Congressman Jim Jordan. Some Republicans say they want to launch their own probes into the origins of Mueller’s investigation. “We must take a hard look at how we got here and at the relevant issues that the Mueller report did not address,” wrote Republican Sen. Chuck Grassley. “Were our premiere law enforcement and intelligence agencies co-opted by candidate Trump’s political opponents in an attempt to take him down? Did political bias or unverified claims taint decisions by senior agency officials?”

Just a few weeks ago, this renewed battle seemed unlikely. As Mueller’s probe wound to a close, and Attorney General William Barr declared the Special Counsel’s report had exonerated Trump, talk of taking Trump down was fading on Capitol Hill. Democrats were already inclined to dance around the issue of impeachment, taking pains to avoid moves that would be seen as overtly partisan. House Speaker Nancy Pelosi had dismissed the avenue just a month ago, declaring Trump’s “not worth it.”

But Mueller’s apparently overt directive to Congress gave lawmakers newfound cover. In a move that is sure to activate the progressive wing of the party, Rep. Alexandria Ocasio-Cortez said after reading the report she would sign on to Rep. Rashida Tlaib’s impeachment resolution. “While I understand the political reality of the Senate + election considerations, upon reading this DoJ report, which explicitly names Congress in determining obstruction, I cannot see a reason for us to abdicate from our constitutionally mandated responsibility to investigate,” she wrote on Twitter. Other Democrats were more cautious. House Judiciary Chairman Jerry Nadler said on April 18 that impeachment was just “one possibility” and said he would “follow the evidence where it leads.”

Part of the Democratic outrage was the result of Barr’s suggestion that Mueller had completely cleared the President. On March 24, Barr and his deputy Rod Rosenstein summarized Mueller’s report to say that Trump did not obstruct justice. But Democrats argue that Mueller declined to make such a judgement. “[Barr] made it sound as if [Mueller] was not up to the task and so he had to leave it to his boss,” said Raskin of the summary. “In fact [Mueller] assembled a huge inventory of [presidential] misconduct with respect to obstruction but then said the Department of Justice has a number of policies that warn him away from making the ultimate legal judgement.”

Democrats’ next moves will be a series of rolling hearings and requests for documents. To start, they will call on both Barr and Mueller testify before Congress. Barr is slated to appear before the judiciary committees in both the Senate and House on May 1 and 2, respectively. Nadler has requested that Mueller appear before the judiciary committee by May 23. Rep. Adam Schiff, who chairs the House Permanent Select Committee on Intelligence, has also requested that Mueller testify. Barr said Wednesday that he would have no problem allowing that. Nadler, backed by House leadership, also announced he would enforce the subpoena he had authorized for the full report and its underlying evidence.

In that, he is likely in for a prolonged legal fight. “It would not surprise me if this got to the courts just because it’s hugely important and high profile,” said one former House attorney, who requested anonymity given the sensitivity of the matter. “I would expect that even if the Justice Department decides to provide flexibility on some matters, for instance national security redactions, with respect to grand jury material I am sure they will take the position that they don’t have the discretion to release that information…” If House Democrats insist on getting the grand jury material, the former House attorney says, “The only way to solve that would be to go to court if the committee wants to get access to that material.”

Twice in recent history clashes between the legislative and executive branches reached the federal courts over similar matters: once during Barack Obama’s tenure, when House Republicans subpoenaed Attorney General Eric Holder during Operation Fast and Furious, and once during the George W. Bush administration, when Democrats subpoenaed White House advisers for documents about the firing of U.S. prosecutors. Veterans of these fights tell TIME they are confident this battle will become the third.

The courts in both those cases were reticent to adjudicate the fight between the other two branches of government, taking years to settle the matter. It seems likely they will try to avoid doing so this time, too. Which means the question of whether the President should be punished for obstructing the Mueller investigation may end up in the hands of the ultimate deciders in a democracy: the voters in the next election.

With reporting by Abigail Abrams and Philip Elliott in Washington 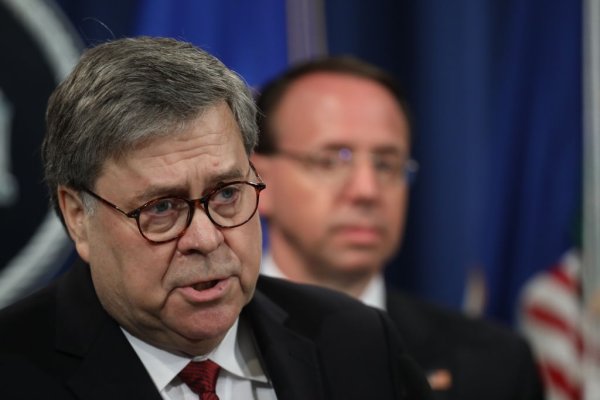 Here's How to Read the Redacted Mueller Report
Next Up: Editor's Pick