Firefighters took swift action after flames engulfed Paris’ Notre Dame cathedral and focused their efforts on preventing the fire from reaching its famed bell towers in order to save the entire structure, fire officials said Wednesday.

“The two towers are pillars which keep the entire building up,” a Paris Fire Brigade official said during a press conference about two days after a fire spread in the cathedral. “The second you lose the war of the belfry, you lose the entire cathedral. It would have been a domino effect from there on out.”

First responders to the fire said the flames could have had a much worse effect had they not acted quickly and put in place equipment to prevent a collapse. Firefighters managed to save the main structure of the building, the towers and most of the relics and artworks stored in the cathedral in the nine hours it took to contain the fire, officials said.

The cathedral’s noted rose windows are “in good condition,” through its stone supports are at risk, Gabriel Plus, a spokesman for the fire brigade said. Now, experts and firefighters inside the Notre Dame are assessing what needs to be removed to avoid further damage and surveying the building for any remaining hot spots.

Fire officials did not have immediate information on reconstruction efforts, though they said the cathedral’s scaffolding and vaulted ceiling have been deformed through extensive heat damage. Support beams have been put in place to avoid further collapse of the structures, they said.

As experts assess the extent of the damage, France’s government has issued a challenge to rebuild the Notre Dame’s spire, which collapsed in the fire. Prime Minister Edourad Philippe invited architects around the world to send in designs and ideas on how the spire should be rebuilt. The announcement comes a day after President Emmanuel Macron vowed to rebuild the Notre Dame “even more beautifully” within five years. 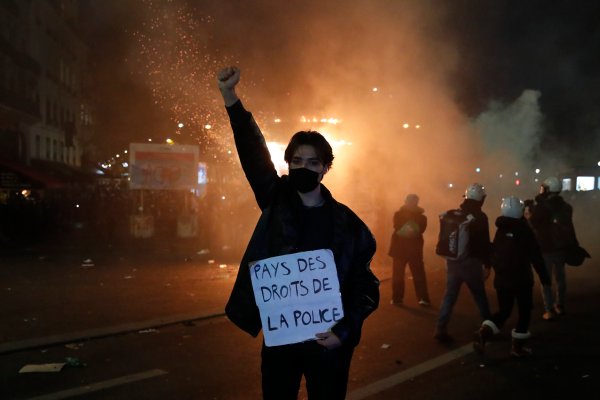 French Lawmakers to Rewrite Proposed Bill on Filming Police
Next Up: Editor's Pick