U.S. President Donald Trump and Prime Minister of Israel Benjamin Netanyahu prepare to shake hands prior to a meeting at the White House on March 25, 2019, in Washington, D.C.
Drew Angerer—Getty Images
Ideas
By Jane Eisner
Eisner is the director of academic affairs at the Columbia University Graduate School of Journalism. She was previously the editor in chief of The Forward.

The results of Israel’s election on April 9 have been interpreted as a victory for the status quo: Prime Minister Benjamin Netanyahu’s Likud party won as many seats as its most serious rival but is best positioned to form a new government. Even though Netanyahu, after four consecutive terms, is personally disliked and faces indictment on corruption charges — and therefore may not actually be able to serve out his full term — the public’s desire for stability and familiarity will likely give him the chance to continue his rule. Israeli Jews believe he alone can keep them safe, strong and prosperous.

“The people want to live in Benjamin Netanyahu’s Israel,” wrote David Horvitz, the founding editor of the centrist Times of Israel.

For many American Jews, though, the status quo is not a victory. It is a source of worry, frustration, alienation and even rupture. The hallmarks of the American Jewish experience — acceptance as a minority in a country built on the values of religious pluralism and social assimilation — increasingly conflict with an ascendant religious nationalism in Israel. The already-strained relationship between the world’s two largest Jewish communities is bound to splinter even further if, as expected, Netanyahu prevails in forming a majority governing coalition in the Knesset, Israel’s parliament.

Politically, this election highlighted how the two communities are trending farther apart. In Israel, right-wing and Orthodox parties won more than 57% of the total votes, the highest proportion in Israeli history; only 34% went to centrist and left-wing Zionist parties. There is little reason to expect this to reverse: Young Israelis, especially, who have come of age during the prime minister’s reign, have a hard time imagining another leader and another approach to governance. By contrast, among the 34 Jews in the current U.S. Congress, only two are Republican, both of whom serve in the House; there hasn’t been a Republican Jew serving in the Senate for more than a decade.

This situation has grown only more extreme under President Trump, who has openly sought to portray Democrats as anti-Israel and, indeed, anti-Semitic, while aligning himself so closely with Netanyahu that he seemed to try to swing the election in his ally’s favor. Trump’s approach to the Middle East is shaped as much by white evangelical Christians as it is by the few right-wing Jews in his administration, with the ironic consequence that the American president appears to support the Jews of Israel more than the Jews of the United States.

The President unilaterally moved the U.S. embassy from Tel Aviv to Jerusalem and cancelled the nation’s participation in the 2015 Iran nuclear deal — two huge wins for Netanyahu. On March 25, Trump signed a proclamation saying that the U.S. would recognize Israeli sovereignty of the Golan Heights, a lightly inhabited territory along the Syrian border that Israel seized during the Six Day War and annexed in 1981, defying international law and abrogating a half-century of America foreign policy.

Then, in the closing days of the campaign, when Netanyahu indicated that he would consider annexing parts of the West Bank — contravening the Oslo Accords and seemingly ending the possibility of a two-state solution — the White House merely shrugged. It was another indication that Trump and Netanyahu have become inseparable, threatening decades of bipartisan support for Israel by making it difficult to support one without the other. That’s not a problem for Israeli Jews, who overwhelmingly adore Trump — 82% expressed confidence in his leadership in a Pew Research Center poll late last year. It is a problem for American Jews, who overwhelmingly vote against him and his party — 71% voted for Hillary Clinton in 2016, and 79% voted for Democratic candidates in the 2018 midterms.

For liberal American Jews, the expanding cloud enveloping Netanyahu is one more reason to be wary. There are others: Netanyahu’s resistance to negotiating with Palestinians to end the 52-year occupation of their lands; his disavowal of an agreement to create an egalitarian prayer space at the Kotel, Jerusalem’s Western Wall; his use of anti-Arab language and fear tactics; his attacks on the media and Israel’s fiercely independent judiciary; and his move to invite a racist political party into his coalition if he won re-election.

That last step so outraged American Jews that even establishment organizations loath to criticize the Israeli government out of loyalty did so anyway.

Even among Orthodox Jews, where Trump is far more popular, there is unease about the ever-tighter embrace of these two polarizing figures. “Why does Netanyahu have to defend every action of the President?” one Orthodox leader, requesting anonymity, said to me. He specifically cited the way Netanyahu’s government tends to downplay anti-Semitic violence in the United States, which is largely driven by white supremacists, who seem to feel emboldened by Trump’s presidency.

Netanyahu’s nod toward annexation — even if it proves to be only an eleventh-hour election ploy — has already further exacerbated tensions. Last week, four Jewish House Democrats with close ties to the mainstream American Israel Public Affairs Committee put out a joint statement warning against extending Israeli law to all Jewish settlements in the West Bank. At the same time, nine leaders of religious and advocacy groups, including representatives of the Reform and Conservative movements, sent a letter to President Trump urging him to rein in Netanyahu and saying that annexation “will create intense divisions in the United States and make unwavering support for Israel and its security far more difficult to maintain.”

Over the seven decades since its founding, the modern state of Israel has come to represent not only a man-made miracle rising from the ashes of the Holocaust, but a living embodiment of Jewish communal responsibility. American Jews are expected to support Israel financially, politically and otherwise, as an extension of Jewish peoplehood and the values they share as Americans. But when those values diverge, liberal American Jews feel anxious and confused about where their loyalties should lie.

Many American Jews today feel as if they are not represented by either leader. Not by their President, and not by the leader of what they’ve been taught is their homeland. Netanyahu’s victory has his supporters calling him King of Israel. But it’s increasingly evident that he is not King of the Jews.

The original version of this story misstated the percentage of Israeli Jews who expressed confidence in Prime Minister Benjamin Netanyahu’s leadership. It is 82%, not 69%. 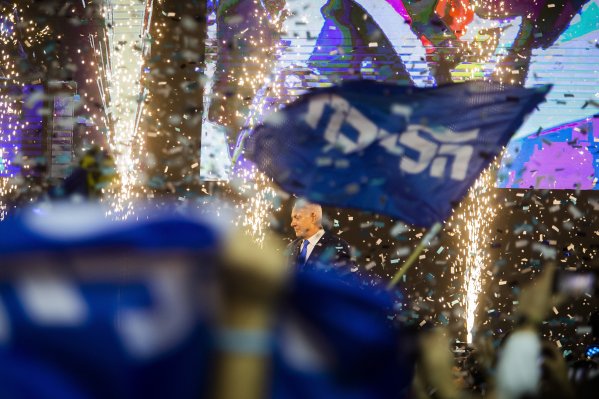 Netanyahu Gets His Chance to Enter History Books as Israel’s Longest-Ever Leader
Next Up: Editor's Pick