Champion's Logo Is Suddenly Cool and Suddenly Everywhere. Can It Last?

On a recent Tuesday at the newly opened Champion store in Philadelphia’s Center City, the brand’s oversize red, white and blue “C” is everywhere: across the chest of thick cotton sweatshirts, down the sides of track pants and on the front of baseball caps. A couple of 20-somethings sift the clothing racks during the lunch hour. They drift through the aisles like wandering billboards.

Jasmine Satchell stopped by with a friend to check out the customization area on the top floor and perhaps buy a hoodie and get it personalized. Already a fan of the company, she wore a gray Champion hoodie and had a dark blue beanie on top of her twists. “I obviously love the brand,” Satchell said, pointing to the logo on her chest. “Everybody can wear Champion. My mom can rep Champion—and my grandma probably can, too.”

The century-old brand best known for basic gym attire is experiencing an unlikely revival. Champion is a benefactor of three swirling style trends that converged to create a teen and millennial fashion craze: Logo apparel is in vogue; throwback gear has returned; and streetwear—the casual style derived from skateboard and sports culture—is having a moment.

Parent company HanesBrands Inc., the longtime stewards of tighty-whitey underwear, is certainly enjoying that moment. The company has had 10 straight years of revenue growth fueled in part by the strength of Champion, its second-largest brand. In its most recent earnings call, HanesBrands Chief Executive Officer Gerald Evans Jr. said Champion is one of three growth drivers for his apparel seller—the only label in his portfolio that earned such recognition.

Champion had double-digit growth during the holiday season, which drove the company’s best fourth-quarter performance in four years. Teens in particular are latching on to the label, with 9 percent of upper-income boys and 5 percent of girls starting to wear its clothes this spring, according to a recent survey from Piper Jaffray. Male teens consider it a top-15 brand, ranking alongside such names as Gucci and Tommy Hilfiger. Last year it had nearly $1.4 billion in global sales. The company hopes to cash in on Champion’s newfound cultural cachet and grow it into a $2 billion unit by 2022.

Susan Hennike, president of Champion’s North America division, has been tasked with reaching that goal. She credits Champion’s popularity surge to increased investment in social media channels, updated designs (including more fashion-forward items like cut-off sweatshirts), new brick-and-mortar locations and collaborations with other established brands. “There’s been a bit of a newfound discovery,” Hennike says of the youths roving her stores. “I don’t think we’ve necessarily changed.”

Since 2016, Champion’s Instagram followers have climbed from 200,000 to about 6 million. (Hennike says she even takes the masochistic step of reading the comments to gauge her followers’ thoughts.) You can find Rihanna and members of the Kardashian clan wearing Champion in paparazzi pics and Instagram posts. Chance the Rapper went further last year, claiming during an Instagram livestream that he helped make the brand “unlame.”

Champion was once best known for making gear for youth soccer squads and college kids, not A-list celebrities. Knickerbocker Knitting Mills was founded in 1919 by Simon Feinbloom and his sons—Abe and Bill—in Rochester, New York, as a wholesale operation. The brothers would later rename it Champion Knitwear Mills and switched their focus to collegiate apparel.

After going nearly a century without opening a single shop in America, Champion debuted its first U.S. store in Los Angeles last year, seeking to gain more exposure in cities known for sports, arts and culture. They have since opened in New York, Boston and Chicago, and plan to open another urban location later this year. Data gleaned from the stores allows the company to tell retail partners what’s selling well, and allows them to promote accordingly.

Consumers have recently embraced brands with long histories and classic logos. Italian sporting goods brand Fila and Kentucky-based Russell Athletic have also experienced a resurgence of late. All of this has created a $100 billion market for streetwear in the U.S., largely driven by teens and young adults, according a 2018 report from PwC. Nearly three-fourths of Gen Z wear the style “some or all the time,” the firm found.

Such listings boost Champion’s street cred, providing shoppers an alternative to more expensive labels, according to Jeff Carvalho, managing director of street fashion site Highsnobiety. Collaborations with streetwear labels Supreme, Vetements, Off White and Kith helped Champion gain access to some of the coolest brands on the planet. “The high and low of fashion can work together,” he said. “Not everybody can buy a $300 hoodie.”

The collaborations have exposed Champion to an entirely new segment of shoppers, those that browse retail’s grandest halls of luxury. Champion’s line made in conjunction with American fashion designer Todd Snyder is sold on the Mr Porter website, and the main label can be found in Neiman Marcus and London department store Selfridges. Currently, the brand is stocked by 56 different U.S. retailers online, according to an analysis by retail research firm Edited. About 60 percent of products listed are menswear.

And yes, its sweatshirts are still on shelves at places like the Appalachian State University campus bookstore.

On that windy afternoon in the Philly store, associates chatted with customers, dropping local lexicon like “jawn.” A 1919 Temple University knit sweater and one of NBA legend Allen Iverson’s warm-up jerseys were on display behind the counter. Executives say that the brand’s multigenerational appeal is key, and such local flair does double-duty as retro cool for teens and genuine nostalgia for adults.

“A lot of it has to do with our heritage and the fact that Champion has been around so long,” said Fred Washington, the Philadelphia store manager, who was wearing a black Champion hoodie emblazoned with the brand’s name and the Liberty Bell. “We’re able to capture millennials that remember wearing it in gym class. We’re able to capture their parents and generations ahead of them because they have a long history with the brand.”

Yapheitt Stones was visiting the store on his way home from physical therapy. It was the day before his 46th birthday, and the brand reminded him of his teenage years. He had liked the brand since the late ’80s, he explained, or as he put it “since the beginning.” He had a closet of their sweatshirts and sweatsuits.

“They’ve got way more products than they had before. They have hats. And it’s great that they’re now in Philly,” said Stones as he showed off one of his purchases: a shirt featuring the city skyline with the Champion name swirling through it. “Champion is an all-time favorite.” 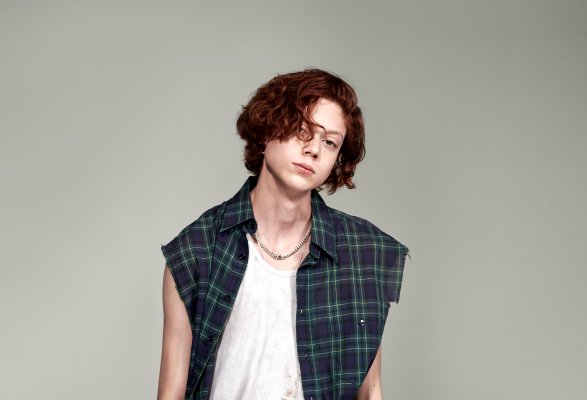 Model Nathan Westling Comes Out as Transgender
Next Up: Editor's Pick