The Notre Dame Fire Put Priceless Art and Artifacts at Risk. Here's What Survived — and What Didn't

A fire that engulfed the roof of Paris’s Notre Dame Cathedral on Monday put more than the famed landmark itself at risk — an important collection of artwork and Christian relics stored in and around Notre Dame also faced danger from the flames.

Many of the most vital works of art and artifacts were saved from the Notre Dame fire, French Culture Minister Franck Riester said, according to the Associated Press. That includes the crown of thorns — believed by some to have been worn by Jesus during his crucifixion — and the tunic of St. Louis. Some works will be moved to the Louvre, where they are expected to be repaired or restored, if necessary.

Firefighters and other emergency responders formed a human chain to save the crown of thorns and other relics from the Notre Dame fire, Paris mayor Anne Hidalgo said. Jean-Marc Fournier, chaplain of Paris’s fire brigade, joined the chain and entered the building to save what holy relics he could, according to local media.

The cause of the blaze remains unclear; Notre Dame has been undergoing an extensive restoration process.

Here are the works of art and artifacts that were saved, lost or destroyed in the Notre Dame fire:

Among the most treasured artifacts that were saved include the Holy Crown of Thorns, a wreath of thorns believed to have been placed on Jesus Christ’s head during his crucifixion, and the tunic of St. Louis, believed to have belonged to Louis IX, who was king of France from 1226-1270. Notre Dame’s famed bell towers also survived the fire.

Also thought to be safe is Notre Dame’s grand organ. Paris Deputy Mayor Emmanuel Gregoire said the organ, which has about 8,000 pipes and dates back to the 1730s, was still intact following the fire. However, Culture Minister Riester said during a news conference Tuesday that the organ was “quite affected” by the fire. While the instrument may be intact, it’s unclear whether it sustained water damage as the blaze was extinguished.

The first immediate loss in the Notre Dame fire came when the cathedral’s iconic spire collapsed after being overtaken by flames. The fire also destroyed the cathedral’s roof.

The extent of the damage to other artwork and relics housed inside the cathedral is still unknown. Riester said some of the greatest paintings inside Notre Dame will be removed starting on Friday.

“We assume they have not been damaged by the fire, but there will eventually be damage from the smoke,” he said.

The fate of other relics stored in the cathedral, like a piece of wood and a nail thought to have been involved in Jesus’ crucifixion, are unknown. 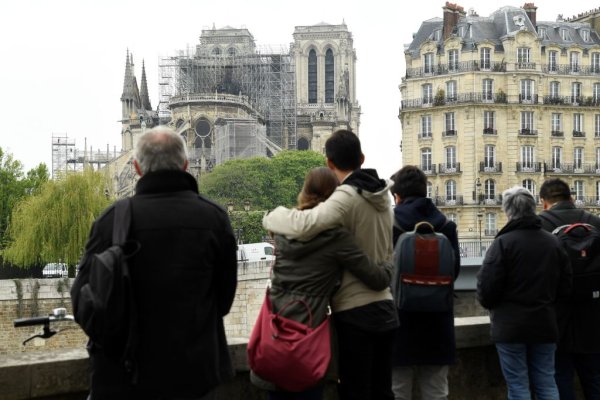 Paris in Shock at Extent of Notre Dame Damage
Next Up: Editor's Pick