A huge fire broke out at Paris’ famed Notre Dame cathedral on Monday, causing extensive damage to the 850-year-old structure, before eventually being extinguished.

These before and after photos show the extent of the damage at one of Paris’ most recognizable landmarks.

Notre Dame cathedral in Paris, before the fire of the afternoon of 15 April 2019 in Paris, France.
Andrea Ronchini—NurPhoto/Getty Images

The Notre Dame Cathedral in Paris following a fire which destroyed much of the building on April 16, 2019.
Victoria Jones—AP

The fire left the building blackened by smoke and destroyed the cathedral’s iconic spire, which was reconstructed in the 19th century. The roof was also destroyed.

It is believed that the cause of the fire was related to a renovation project being carried out at the cathedral. Investigators have ruled out arson and terrorism.

World leaders have been expressing their solidarity with France in the wake of the blaze, AP reports. U.S. President Donald Trump called the cathedral “one of the great treasures of the world.” Pope Francis, Japanese Prime Minster Shinzo Abe, and Russian President Vladimir Putin all expressed their sadness, AP said. 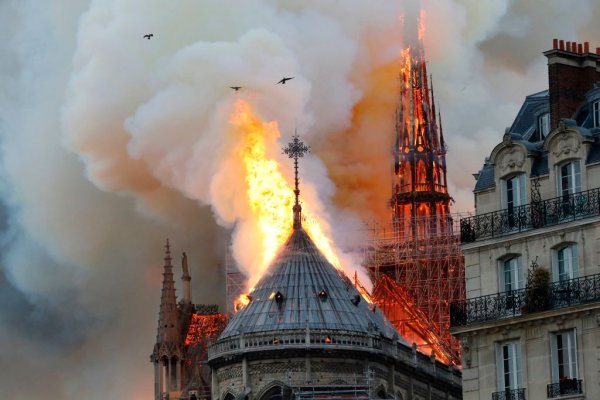 Prosecutors Rule Out Arson at Notre Dame Cathedral
Next Up: Editor's Pick