The full extent of the damage caused by the fire that broke out at Notre Dame Cathedral in Paris on Monday can’t yet be known. The fire destroyed a majority of the original roof and Parisians who live nearby were evacuated during the day out of fear that the building might collapse entirely, but the towers were saved, no casualties have been reported so far and President Emmanuel Macron has promised to rebuild.

The disaster may be the worst that the cathedral has experienced since the French Revolution, says Laurent Ferri, Curator of the pre-1800 Collections in the Rare Division and Manuscript Collections at Cornell University and a former curator at the French National Archives.

The devastation of one of the world’s most recognizable landmarks is always a shock, but the damage to Notre Dame has been particularly heartbreaking for the French and for people around the world, considering the building’s important role in the nation’s patrimony.

“It’s not just a building,” Ferri says, “but a place that is extremely important in terms of collective memory and identity.”

About one thousand workers labored to build the cathedral on the small island of Île de la Cité in the Seine River between 1163 and 1345, replacing an earlier church, as TIME explained in 1955:

From an architectural standpoint, “it really helps launch the revolution we call Gothic Architecture,” says Stephen Murray, an expert on the building and Professor of Medieval Art History Emeritus at Columbia University.

“The king of France wanted to build a magnificent cathedral to show that Paris was the political and economic capital of France,” says Ferri. “There was a strong alliance between church and state, and this idea that France was first among the Christian realms, so the largest and most magnificent cathedral would have to be in Paris.”

In the intervening centuries, Notre Dame has also been where France has welcomed, and bid farewell to, its leaders and icons. Napoleon I was made emperor there in 1804. Pope Pius X beatified Joan of Arc there in 1909. And it’s the site of memorial services for French Presidents, such as the ceremony for Charles de Gaulle in 1970 and François Mitterrand in 1996.

The fire, however, is not the first time the cathedral has been a victim of destruction — or restoration.

In the 16th century, Huguenots — a group of French Protestants — damaged some of the statues they considered idolatrous, and in 1793, during the French Revolution, anti-royalists stormed the cathedral to declare it a “temple of reason.” They removed and decapitated statues that they thought represented French kings. The statues were actually biblical kings; archaeologists found them in 1977, and they have been restored.

The roof that caught fire is original, made of 5,000 oak trees. The medieval spire, which collapsed on Monday, was removed in 1786 because it wasn’t stable, then rebuilt during the 1860s, in a design conceived by Eugène-Emmanuel Viollet-le-Duc, when Napoleon III was in power. Viollet-le-Duc himself even modeled for the statue of the apostle St. Thomas, considered a patron saint of architecture. “We mourn this section of the soaring spire, but when Viollet-le-Duc added it to the existing cathedral it was a very controversial decision,” says Ferri. “It would be not just a restoration but an alteration of the medieval cathedral if most of what [he] added is destroyed.”

The famous gargoyles were also fashioned during this 19th-century restoration.

In 1935, the archbishop of Paris put relics of Saint Denis and Saint Genevieve inside the spire to protect the building, perhaps in case of another massive European war, after the burning of the Reims Cathedral in World War I, according to Ferri. But Notre Dame survived both world wars, and its bells rang out to celebrate the end of the First World War and the liberation of Paris in 1944 during the Second World War.

Today, it’s clear that the will to fix the damage exists, though the means may be difficult. Even before the fire, the cathedral was already endangered by more ordinary damage, and Murray says he believes the world is not in a place to fully rebuild what has been lost.

The cathedral was already deteriorating when Victor Hugo’s novel The Hunchback of Notre-Dame came out in 1831, and yet the author even then was the one to perhaps best sum up the importance of preserving the cathedral he famously described as a “symphony in stone.”

“Every face, every stone, of this venerable monument,” he wrote, “is a page not only of the history, of the country, but of the history of science and art.” 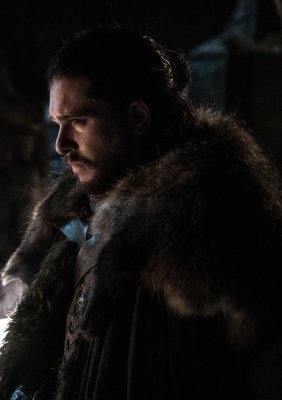 A Major Moment Took Place in the Crypts Beneath Winterfell. Here's the Real History Behind the Key 'Game of Thrones' Location
Next Up: Editor's Pick