'He's Not Hard to Predict.' Kit Harington Discusses What Jon Snow Could Do With That Game of Thrones Revelation

Jon Snow’s true parentage has been one of the worst kept secrets on Game of Thrones for years. Fans have touted the R + L = J theory for more than a decade. And at the end of last season, Bran Stark and Samwell Tarly unlocked the secrets hidden in the Tower of Joy—leaving fans a two full years to speculate how Jon himself would take the news.

In “Winterfell,” that reveal finally happened—and it didn’t go over so well. When Samwell (John Bradley) told Jon (Kit Harington) that he is the son of Rhaegar Targaryen and Lyanna Stark, making him the true heir to the Iron Throne, he reacted with shock and anger.

“My father was the most honorable man I’ve ever met,” he told Sam, referring to Ned Stark. “You’re saying he lied to me all my life?” He then called Sam’s words “treason” against Queen Daenerys.

The news is devastating on multiple levels for Jon. Not only does it undermine his past relationship with the man he thought was his father, it potentially places him at odds with the woman who he has sworn to serve – and makes his current lover his aunt. In an interview with EW published following the episode, Harington opened up about Jon’s tortured reaction to the news, calling it “the most upsetting thing in the world.”

“He’s not hard to predict, Jon, he doesn’t do many unexpected things,” Harington told EW. “You mark the particularly tricky scenes that you’re going have to concentrate on and this was one. He finds out such a massive piece of information. Not only does he find out who his mother is but also that he’s related to the person he’s in love with. It’s hard for any actor to play. It’s not a two-hour movie but eight seasons of playing a character who’s finding out.”

“For that moment, Samwell is nothing to him,” Harington says about his character’s best friend. “Jon would disown this friend and beat him up if he was trying to lie to him about this. He’s quite threatening: You’re telling me this, you better be f—king right, and if you’re trying to play me — that was the way to play that scene I think.”

Harington also confirmed that the news is a blow to Jon’s utter lack of interest in ruling the Seven Kingdoms. “He has no ambition for the throne. He’s never wanted that,” he said. “The end of the world might be coming soon but at least he’s in love with somebody and knows who he is, and then comes this sledgehammer.”

John Bradley, who plays Samwell, also gave his perspective on the scene to EW, comparing it to a Beatles song.

“With Jon, he can review his entire life backwards and see everything completely different and in sinister terms even if [withholding his parentage] was done for the right reasons,” he said. “Everything he’s done seems to have been compromised.” 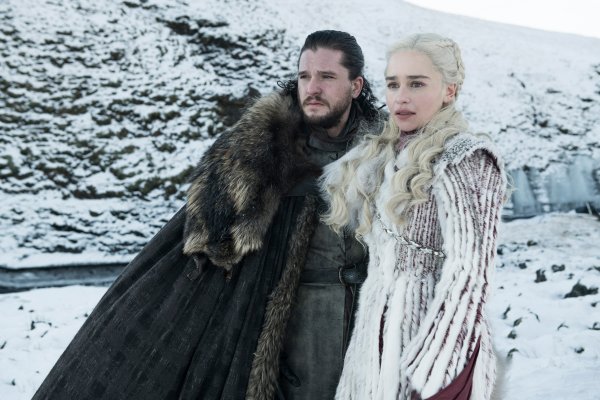 The Best Memes of Game of Thrones Season 8 Premiere
Next Up: Editor's Pick