Why Did the Dragon React So Angrily to Jon and Daenerys' PDA?

While many Game of Thrones fans are shipping Jon Snow and Daenerys’ burgeoning romance, it appears that Drogon, pre-eminent dragon of the Seven Kingdoms isn’t too hot for this pairing. During the season eight premiere on Sunday night, the dragon appeared to be watching Jon with a healthy dose of wariness as the former King of the North made out with Queen Daenerys.

Since Daenerys is the Mother of Dragons and has always had an especially close relationship with Drogon, it makes sense that Drogon could be jealous of a new person vying for Daenerys’ affections, in the same way that a pet could be wary of an owner’s new significant other. However, Game of Thrones sound designer Paula Fairfield has an interesting take on the dragon’s reaction to Daenerys and Jon’s PDA that delves into the deep symbolism that she has imbued on the dragons.

Fairfield, who’s responsible for crafting many of the memorable sounds you hear on the show, from the White Walkers to dragon brothers Drogon, Rhaegal and Viserion. As such, her sound work has also helped to shape the formation of the dragons’ personalities, particularly Drogon, whose sounds she created with a significant character in mind. In an interview on Vanity Fair’s Still Watching podcast, Fairfield explains how this relates to her theory about Drogon’s reaction further.

“My story of Drogon is he’s the reincarnation of Khal Drogo, [Dany’s] hot husband from Season 1,” Fairfield said. “That relationship I always have in mind when choosing Drogon’s [sound] palette.”

To back this up, Fairfield pointed to Jon’s initial meeting with Drogon in season 7, where the dragon demonstrated his power to an awe-struck Jon Snow.

“My story that I told myself is that he was being dominant. ‘I can piss way farther than you.’ He was kind of nice to him. ‘Maybe you’re fam.’ My comment in my head before he flew away was: ‘Remember, bro, she only rides me.’”

While Fairfield was quick to note that this theory is her own personal interpretation and not canon for the series, it’s definitely a worthwhile guess at why Drogon may have been in his feelings about Jon and Daeny’s smooch. 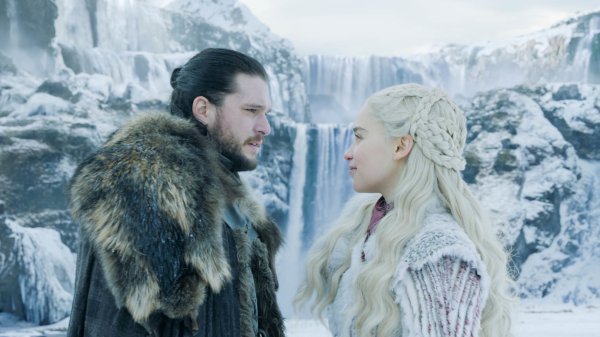 How Daenerys' Romantic Scene Could Hint at Her Downfall
Next Up: Editor's Pick