In episode 5 of season 7 of Game of Thrones, Cersei Lannister told her brother Jaime that she was pregnant. In the first episode of season 8, she formalized another important relationship: her alliance with Euron Greyjoy. After Euron brought the queen soldiers from the Golden Company, he asked to have some, um, alone time with Cersei. She told him that he was insolent, but consented after he essentially implied he would sail away from Westeros with the soldiers that she needs if she didn’t show him some affection.

Cut to Cersei and Euron in the bedroom.

It seems like this was the first time Cersei and Euron consummated their relationship, essentially confirming that the pregnancy Cersei announced in last season was the product of her relationship with Jaime. Of course, that means that Euron’s line to Cersei, “I’m going to put a prince into your belly” is impossible — if, indeed, Cersei was and is still pregnant.

It’s unclear, however, if that’s actually the case. Cersei stopped drinking at the end of last season when she thought she was pregnant, and Tyrion surmised her situation based on her sobriety. But Cersei was enjoying a glass of wine after sleeping with Euron. While the Westerosi doctors probably aren’t warning Cersei against fetal alcohol syndrome, the change could signal a change in Cersei’s status.

Whether Cersei is currently pregnant or not, she’s likely to lose her baby at some point: Maggie the Frog prophesied that Cersei would have three children and all of them would die — which has come to pass. In the books, Maggie also predicts that Cersei will die at the hand of a “little brother,” or valonqar in High Valyrian. Cersei has long suspected that Tyrion would be that little brother who kills her, though many fans believe that Jaime will in fact be Cersei’s murderer.

But some fans also theorize that any “little brother” could be Cersei’s killer, not specifically a brother who is related to her. Euron Greyjoy is the younger brother of Balon Greyjoy, and it is possible that he is the one who betrays Cersei and kills her. He certainly does not seem trustworthy. 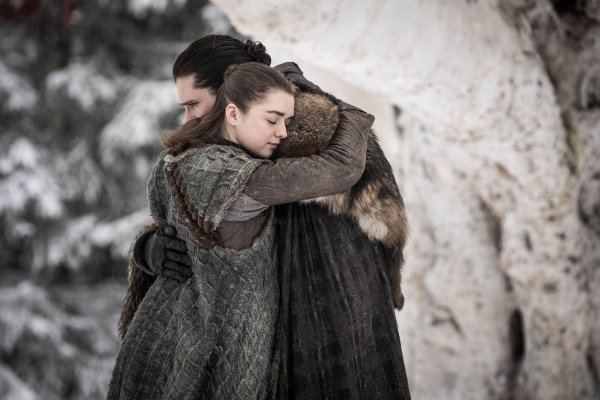 Game of Thrones Finally Gave Fans the Emotional Reunion They've Been Waiting For
Next Up: Editor's Pick