(Bloomberg) — France’s Yellow Vest protesters took to the streets for a 22nd straight Saturday, leading to clashes with police in the southwestern city of Toulouse, while the capital remained calm.

Police used tear gas and water cannon in Toulouse to keep demonstrators out of the center of the city, French television showed. Parts of Paris and some regional cities were declared off limits to protesters following an eruption of violence last month, when anarchists sacked and burned stores and restaurants on the Champs-Elysees.

Around 31,000 Yellow Vests turned out across France, including about 5,000 in Paris, according to Interior Ministry figures cited by AFP, up from about 22,300 last Saturday.

The Yellow Vests have protested every Saturday since Nov. 17, with demands ranging from lower taxes and improved spending power to better public services, although numbers have declined since the movement began.

French President Emmanuel Macron responded in part by holding a 10-week debate with citizens across the country on how to tackle France’s problems. In the coming days he’s due to set out his conclusions, designed to take the heat out of the protests.

Prime Minister Edouard Philippe said on Monday, after he was presented with a study outlining the findings of the debate, that the “clear message is that taxes must fall and fall fast.”

For Laurence Boone, chief economist of the Organization for Economic Cooperation and Development, the key is for the government to spend more effectively and to prioritize equal opportunities in society.

“Maybe public spending can decrease a bit, but most of all it’s not necessarily well targeted,” she told Le Monde newspaper in an interview published on Saturday. She added that while the middle classes felt they paid a lot of tax, their spending power had barely increased in the last decade.

An Ifop-Fiducial survey released three weeks ago found that 46 percent of those polled support or have sympathy for the Yellow Vest movement, down from 50 percent in mid-February. 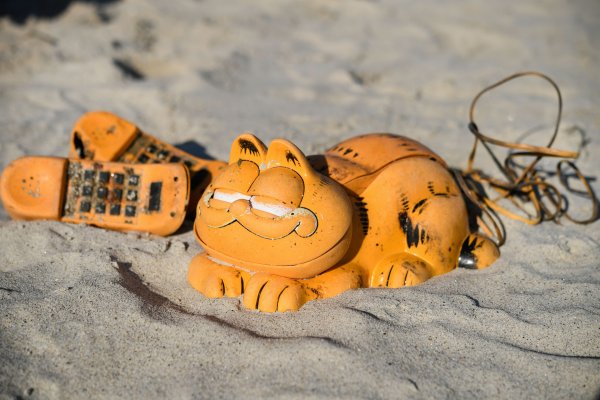 Mystery of Garfield Phones Washing Up on Beaches Solved
Next Up: Editor's Pick