We Just Learned a Ton About Uber's Business From Its IPO Filings. Here's What to Know

Good luck to potential investors in Uber’s coming initial public offering. Multiple advanced degrees might be needed to figure the company out.

As expected, Uber on Thursday dropped its initial offering document to pitch its business to investors, and befitting the company’s size and complexity, it was a doozy. It is 285 pages, plus 83 more of financial statements. Facebook Inc.’s initial IPO document in 2012 was 150 pages plus 29 in additional financial statements. (The document for Uber’s small rival Lyft Inc. was 220 pages plus 44 pages of financials.)

And Uber does require twice as many (digital) pages to explain itself. Uber is uber-sprawling, which presents a challenge to investors weighing whether to buy into a company with a reported valuation in the $100 billion range. And as is the case for Lyft, it remains unclear whether there is lasting demand for Uber’s two main products — on-demand rides and restaurant meal deliveries through Uber Eats — and whether any of it is financially viable.

For the Uber optimists, there was plenty to like. The company, as it has disclosed before, generated more than $11 billion in net revenue last year, a 42 percent growth rate from the year before — although it’s noteworthy that the rate slowed to 22 percent in the fourth quarter of 2018 from 69 percent in the first quarter of the year. This is not a hypergrowth company anymore, at least not in its biggest business of rides on-demand.

To Uber’s credit, it is firing off a cannon-sized number of metrics at investors. Uber discloses its “core platform contribution profit,” a hand-selected metric intended to show the revenue of its two main businesses minus some of the driver incentives, legal costs and other stuff. There are maps showing Uber’s market share by country, a disclosure of tips paid to Uber drivers (a cumulative $1.2 billion) and a metric for Uber’s “monthly active platform consumers,” or the average number of people who take a car ride, rent an Uber scooter or bicycle or get a meal delivered from Uber Eats at least once in a given month.

The overall message: Uber is complex. I’m not sure I’ve ever read a more sprawling IPO document, which reflects Uber’s sprawl.

There’s on-demand rides, of course, which Uber disclosed generate about 80 percent of the total value of the company’s transactions. Growth in the value of transactions from rides slowed to 25 percent in the fourth quarter of 2018 from 44 percent in the early part of the year. Despite rides being Uber’s original business and accounting for the vast majority of its sales, the company spends big chunks of its IPO document talking about everything else.

That means Uber Eats food purchases, which accounted for 18 percent of Uber’s total transactions in the fourth quarter, plus the still relatively tiny business from Uber’s rented bicycles and scooters and its work as a middleman for freight deliveries – which combined were less than one percent of total transaction value. Uber also owns parts of multiple on-demand ride companies around the world, including Didi Chuxing in China and Russia’s Yandex. It has spent more than $1 billion developing a driverless car operation. This company is everything and everywhere.

The essence of Uber’s pitch is despite having $11 billion in annual revenue and a valuation in a rarefied zone, it’s just getting started. All companies going public have to say this, of course. But it’s notable that Uber’s pitch is it will someday be an even bigger (and eventually profitable) powerhouse thanks to its multiple unproven businesses.

Uber also engages in some sleight of hand about the ties connecting all its businesses. Uber said in its IPO document that people who take rides from the company and also use its restaurant delivery business did more trips than people who used just one of those services. The company also said its technology for matching supply and demand is relevant to car rides, scooter trips, restaurant meal orders and shipping bottles of water across the U.S.

The idea is to show that Uber is not a collection of semi-related services like Tyco or other old industrial conglomerates, but a company whose many parts contribute to a greater whole. It sound nice, but investors should ask hard questions about how much of Uber’s expertise in signing up ersatz taxi drivers is useful for reaching deals with restaurants to deliver burritos, or big companies that want to ship potato chips to grocery stores.

More so than even the usual coin-toss bet of an initial public offering, investing in Uber is almost entirely about what it could become and less about loving the company as it exists today.

“We will not shy away from making short-term financial sacrifices where we see clear long-term benefits,” Uber CEO Dara Khosrowshahi wrote in a letter to investors. That is an odd thing to say for a company that has been unprofitable for 10 years. It’s also the most important sentence about Uber. This company — already huge and built with billions of dollars in investors’ cash — has no choice but to keep investing and to jump-start growth in its sprawling empire. 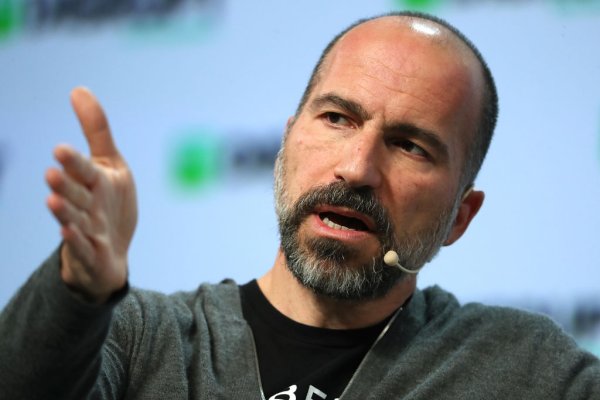 Uber CEO's Letter to Investors Ahead of Major IPO
Next Up: Editor's Pick