A Monster Storm Dumped 'Dirty Snow' on the Midwest. Here's Why

There’s a little bit of Texas in Minnesota this April.

In the wake of a massive “bomb cyclone” storm plowing through the central United States, residents in Minnesota and other parts of the upper Midwest have noticed something unusual. Unusual, that is, beyond the enormous mid-April snowstorm itself, which has pounded the region with high winds, heavy snowfall, downed trees and power outages.

People in some areas have noticed some discoloration in the freshly fallen snow, reporting patches with a red, brown, or faintly orange tint. It’s a phenomenon dubbed “dirty snow.”

The explanation, it seems, is in the sheer size of the weather system. Chris O’Brien, a meteorologist at the National Weather Service (NWS) Twin Cities in Minnesota, tells TIME winds in Texas and New Mexico picked up dust and carried it hundreds of miles north, where it fell back to Earth with the region’s snow.

“[The wind] picked up a lot of dust and got it entrained into the circulation of this storm system and pulled it all the way up into Minnesota where it fell with the precipitation,” he says. “You could actually see it on satellite, which was pretty cool.”

NWS Twin Cities tweeted out one of those satellite images on Thursday, which shows the stream of dust blowing northeast through the atmosphere on its way to the upper Midwest.

Many locals who spotted the strange-looking snow reacted to it on social media:

According to forecasters, this month’s “dirty snow” is a rather unusual phenomenon.

“We get the discolored snow sometimes, but usually it’s from dust that’s closer to here, not … from all the way close to the Mexican border,” says O’Brien.

However, aside from the possibility of needing a car wash after the discolored snow melts, O’Brien says the Texas dust shouldn’t pose much of a hazard to residents.

Dirty snow on its own might not be much of a danger, but the massive storm system has wrecked havoc across the region, with high winds and heavy snow bringing down trees and leaving tens of thousands without power in Minnesota and beyond. South Dakota Gov. Kristi Noem closed many state offices for the second straight day on Thursday, and hundreds of schools in the region cancelled classes.

It’s the second so-called “bomb cyclone” in the past month, a weather phenomenon that reportedly features an explosively strengthening storm alongside a rapid drop in air pressure. The storm also triggered reports of “thunder snow” in central South Dakota, per the Associated Press.

Many Minnesota counties remain under blizzard watches or warnings into Friday, according to Accuweather. South Dakota, Wyoming, Montana and parts of Colorado also faced blizzard conditions, according to the site. 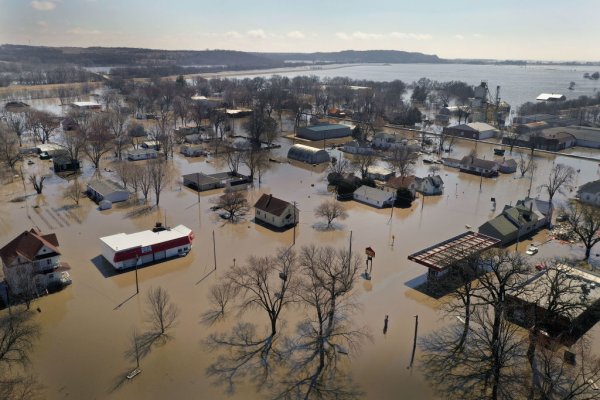