Game of Thrones May Be the Last True Water-Cooler Show. Is That Such a Bad Thing?

'Game of Thrones' premieres its final season on HBO this month.
HBO
By Judy Berman

Game of Thrones fans are sure to witness many deaths in season 8, but rumor has it that the show’s most painful casualty will come after the series finale. As Netflix firehoses content and cashed-up streaming services keep emerging to transform media giants’ intellectual property into profit, critics like me have been fretting over the seemingly inevitable demise of television as mass cultural event. That panic has crystalized around Game of Thrones—a series that remains both hugely popular and widely respected at a time when ratings and prestige sometimes seem mutually exclusive.

This kind of consensus hit can be really healthy for a society as fragmented as ours. Divided by class, politics and identity, we can at least come together to watch Game of Thrones—which averaged 32.8 million legal viewers in season seven. If fantasy buffs, academics, TV critics, proponents of Strong Female Characters, the Gay of Thrones crew, Black Twitter, Barack Obama, J. Lo, Tom Brady and Beyoncé are all losing their minds over the same thing at the same time, the demise of that collective obsession is worth lamenting—or so the argument goes. Yet I’m not sure I agree. As anyone who’s found themselves in the crosshairs of a massive online fan community can tell you, an entertainment monoculture isn’t inherently good. A lively cultural conversation may be desirable, but the content of that conversation matters. And when it comes to Game of Thrones, I’m not convinced that this particular discourse still deserves the hand-wringing.

This is partly the fault of the show itself. Stellar performances, an HBO pedigree and early seasons that invested as much energy in character development and ideological conflicts as they now devote to dragon-vs.-zombie combat made Game of Thrones the kind of drama everyone was obliged to take seriously from the beginning. (Even the criticisms about rape and arguably exploitative depictions of female characters that have followed the show for the entirety of its run presuppose that viewers should expect more sophistication out of this narrative than the typical fantasy quest.)

It’s become a very different story since creators David Benioff and D.B. Weiss started diverging from George R.R. Martin’s source material, which they ran out of entirely in season five. Episodes like “Battle of the Bastards” and season five’s beyond-the-Wall battle “Hardhome” (both directed by Miguel Sapochnik) were technical marvels on a scale that TV had never even attempted before. But it’s telling that these moments, rather than character beats or ethical dilemmas, now generate the most anticipation and analysis. Viewers who need more out of serialized narratives than expensive spectacles have spent the past few seasons mourning the wittier, more thought-provoking show that was. Now, episodes feel too thematically slight to justify all the chatter they inspire.

A lot of that talk has revolved around clues, Easter eggs and subtle callbacks to scenes that aired in 2011 or 2012. To some extent, that’s a natural trajectory for a show with such grand ambitions. Game of Thrones spent years building Westeros (and its viewership, which has more than tripled since season 1); the payoff is a captive audience’s immersion in that world’s history and lore. Yet there’s a difference between making the most of an established setting and letting minutiae overtake big ideas. Meanwhile, for reasons that have as much to do with the Redditization of cultural criticism as they do with the series’ devolution into pure plot, more substantive conversations of the kind early seasons encouraged have gotten drowned out by fan theories, publicity stunts and character stanning—the kind of stuff that makes my eyes glaze over. Millions of us watched Daenerys and Jon Snow consummate their icky romance, sure. What did it do for us as a society?

This isn’t an indictment of TV that entertains more than it provokes thought. (That would be pretty hypocritical coming from someone who relishes every second of Lindsay Lohan’s Beach Club!) Still, with something like 500 scripted series airing every year, it’s fair to ask: Why is Game of Thrones the one current show we can all supposedly agree is good, profound and—despite the incest and magic—applicable to everything? Many of the answers are obvious: It’s based on widely loved books. It predated the streaming boom. It’s a one-stop shop for TV-MA violence and invariably odd sex. HBO has sunk enormous sums of money into it, including a marketing budget sufficient to make the announcement of a distant premiere date break the internet.

This is another way of saying that Game of Thrones has flourished largely because it was set up to flourish—because the people who bankroll prestige television decided before the first season even went into production that this story of battles, bastards and butts was worth an episodic budget three times as large as that of the typical cable series. In turn, the kind of viewers who subscribed to a channel that once had the tagline “it’s not TV, it’s HBO”—a group that traditionally values the opinions of critics—who might otherwise have dismissed the show, sight unseen, as genre trash embraced it instead.

Again, this isn’t a bad thing in isolation. Water-cooler TV of generations past was grounded in the particulars of contemporary American life; even Seinfeld sparked debate over social norms. But authors from Edgar Allan Poe to Octavia Butler have long since proven the myopia of genre snobbery and demonstrated that genre fiction can speak just as eloquently to the human experience as realism.

What’s frustrating is how narrow the brand of entertainment populism that elevated Game of Thrones to such an exalted plane of cultural significance, and kept it there even as the quality of its storytelling slipped, tends to be. As in the movies, it seldom seems to benefit genres or audiences that aren’t predominantly white and male. There are exceptions: Black Panther. Gone Girl. The Handmaid’s Tale. But most of the time, even the best genre releases that center underserved demographics rarely get the funding or a priori respect they deserve. Despite constant calls to diversify Hollywood, the assumption that everyone wants to watch white guys and white guys only want to watch themselves is far from dead.

Consider Get Out, which overcame a February release and a budget less than a third the size of one Game of Thrones season 8 episode on its way to becoming a classic “social thriller.” One of HBO’s biggest hits in recent years, the female-focused whodunit Big Little Lies, has the sizable budget that comes with A-list producer-stars like Reese Witherspoon and Nicole Kidman. (Would the adaptation of Liane Moriarty’s novel even have gotten made without them?) Yet plenty of critics initially dismissed it as a glossy soap, failing to see that it uses Lifetime clichés just as smartly and subversively as George R.R. Martin uses fantasy tropes.

As the monoculture of Game of Thrones mania reassembles in anticipation of one last season, the genre show that has crossed my mind most often is Killing Eve. The devilishly smart, fun, layered, female-led spy thriller debuted quietly last spring on BBC America, a channel previously best known for importing Doctor Who. It saw consistent week-over-week audience growth throughout its first season—a rare feat—thanks to a vocal fan base. And after months of muted praise, Eve turned out to be critics’ single favorite series of 2018. This past Sunday, its season two premiere bested its season one finale in the ratings by an impressive 67 percent. In terms of viewership as well as mass-cultural impact, it still doesn’t compare to Game of Thrones. But it’s worth considering that the discrepancy might say more about the biases of check signers and gatekeepers than it does about the quality, relevance or potential widespread appeal of each show.

Of course it’s nice to have a show that can serve as a cultural lingua franca, especially now that Americans of different ages, races, religions, regions, countries of origin, genders, sexualities and education levels so rarely seem to understand each other. Yet I can’t say I’ll really miss that shared experience when all we’re ever talking about is whether an ice dragon can kill a fire dragon and who (if anyone) will end up on the Iron Throne. In any case, amid a TV landscape whose dizzying expansion has fostered scores of “niche” shows that speak to so many different kinds of people, it seems crazy to go to pieces over the loss of Game of Thrones. If the price of variety and visibility is consensus, I’m happy to pay it. 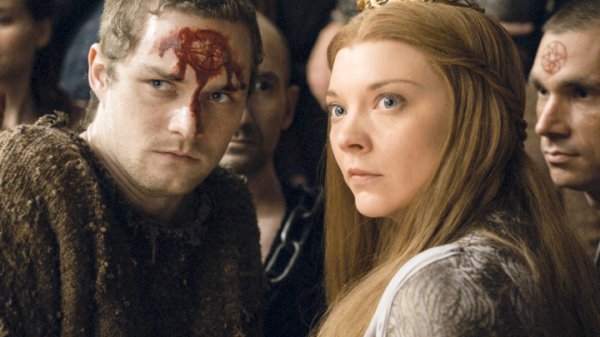 All the Game of Thrones History You Need to Know Ahead of Season 8
Next Up: Editor's Pick