A Game of Thrones, the first book in George R. R. Martin’s A Song of Ice and Fire fantasy book series, opens in exactly the same way that the HBO series Game of Thrones does, with three men of the Night’s Watch patrolling north of the Wall on a cold evening. In a tense sequence, they discover a group of mutilated wildlings and are attacked by White Walkers. Only one escapes with his life.

The popular show didn’t stray far from its source material when it debuted back in 2011. But the differences between the show and the books have widened over the years, as the HBO series has progressed ahead of the timeline in Martin’s novels. (Martin most recently published A Dance with Dragons, the fifth installment in the seven-book series, in 2011, and has yet to commit to a release date for the sixth. Meanwhile, the eighth and final season of Game of Thrones premieres April 14.)

Screen adaptations of popular books have often been disdained. But Game of Thrones is a grand exception. Martin’s series, which clocks in at over 5,000 printed pages and counting, offers an engrossing world with memorable characters and lore. The books have been a hit since A Game of Thrones was published in 1996, inspiring a full online Wiki and selling more than 11 million copies across the series before the show began. Even so, as the television series has progressed, it has managed to surpass the standards set by the books, thanks to its lavish budget, nuanced acting and team of showrunners who tapped directly into the story’s heart to streamline — and polish — its plotlines. The show has also set TV records, averaging over 30 million viewers in its seventh season.

The question of assigning quality to one medium over another is an age-old debate, but in this case, the on-screen Game of Thrones comes out on top. Here’s why.

A Song of Ice and Fire vs. Game of Thrones: Pictures vs. prose

Martin is an engaging and inventive writer; there’s a reason he developed a passionate fandom before the show ever aired. His imagination is his key resource, deployed in A Song of Ice and Fire to build a complex world of fantastical religions, races, histories and characters. But people don’t pick up A Song of Ice and Fire for the strength of the prose. The draw is the momentum of the story itself. And the Game of Thrones show took that story and ran with it, proving that a TV series could be — and should be — just as beautiful and believable as any big-budget movie.

Thanks to stunning filming locations (including Iceland and Croatia) and a top-notch effects team, the show brings the land of Westeros to life in a way that Martin’s books only hint at; his descriptions of the landscapes can leave a reader wanting. In that first scene in the book, for instance, Martin’s characters bicker in an expositional back-and-forth. Outside the dialogue, Martin describes the men’s rising fear with heavy-handed prose: “All day, Will had felt that something were watching him, something cold and implacable that loved him not,” he writes. “Fear filled his gut like a meal he could not digest.” The show, meanwhile, does more with less. Shots of a darkening forest, eerie silences, the surprise of seeing a corpse’s face — these offer tension and anticipation without melodrama.

One of the strengths of A Song and Ice and Fire is the extensive network of characters that Martin maps out. But that, in turn, is also its weakness. Each new character that’s introduced has the potential to become a main driver of plot, or to disappear from the narrative altogether within a few pages. (Martin is famous for unexpected deaths.) But the glut of characters means that Martin can only go so far to develop key details like personality traits and individual voices, so his characters — particularly the women — can feel one-dimensional and flat, lacking in skillful internal dialogue as Martin outlines their basic motives.

By contrast, the show tightens up the focus on certain star characters who drive the plot forward — and portrays them with nuance, giving an Emmy-winning cast the chance to flex its acting muscles. Consider Cersei Lannister. In the books, she comes across as a vile, self-serving woman, unsympathetic in her reign of terror. Her motives are opaque; her drive toward self-preservation is paramount. Even the bits of internal monologue Martin does write for her only sharpen her one-dimensionality. In the show, however, actress Lena Headey gives her character an inner life of conflict, desperation and uncertainty. Her steely exterior, viewers of the show know, is a front she puts up in public to guard against the demons that haunt her from within. Cersei may very well be a tyrant, but in her on-screen depiction we find a humanity (and a relatable love for an evening glass of wine) that never appears in the book’s pages.

Yes, Game of Thrones has gotten some things wrong

Of course, the show has made its mistakes. In its approach to sexual violence,Game of Thrones has often slipped up by making light of the trauma of rape. One famous controversy centered around a confrontation between Cersei and Jaime Lannister after the death of their son Joffrey. In the book, their encounter — fraught with frustration, grief and desire — is complicated but consensual. In the show, he violates her as she remains silent, not giving her consent. That shift of Cersei’s agency — from consenting to victimized — undermines the show’s understanding of its own characters. Beyond Cersei, the show’s gratuitous use of nudity and regular depiction of sexual violence has not gone unnoticed. Martin’s books themselves are rife with matter-of-fact rape and taboo impulses, including incest and torture (see: Ramsay Bolton). But onscreen, and in the context of a production that has sought to deepen the story set forth in the books, those violations are even more unsettling. As the show progressed, however, the showrunners seemed to pivot more towards empowering the female characters: as season eight dawns, the show’s star women are almost all in positions of power. And those famous brothel scenes? It seems those are all in the past.

While we’re on the subject of points in favor of the books over the show, we can’t skip over the detail-based squabbles that book purists have pointed out: the show’s takes on magic and geography. Daenerys Targaryen may be called Mother of Dragons, but in Martin’s description of the magic in his universe, that does not make her immune to fire. In the show, however, she emerges from a fireball with even her platinum hair un-singed. And the show merrily collapses the travel time around Westeros for Daenerys, Jon Snow and others in the seventh season, putting plot positioning before logistics.

But the show smartly puts the plot first

The above deviations make sense in service of the TV show’s smartest choice: focusing each episode tightly on a theme. In that way, the showrunners organized what can feel like a messy, sprawling world into a cohesive story. Episodes like the infamous “The Climb” or “Battle of the Bastards” bring together characters and concepts like ambition and war in ways that the books never do. That’s not Martin’s fault: he set out to write an epic, not a neat, episodic TV show. But for the person consuming the content, seeing it distilled as showrunners David Benioff and D.B. Weiss have chosen to do is a much more immediately satisfying experience. Plus, the show has smartly done away with tertiary characters. Jeyne Poole is replaced by Sansa Stark as Ramsay Bolton’s wife, sharpening Sansa’s story; Catelyn Stark’s reincarnation as Lady Stoneheart, meanwhile, is completely excised from the show.

When Martin began writing A Song of Ice and Fire back in 1991, he couldn’t have known it would become one of television’s biggest blockbusters. He focused on building a fantasy world of feudalist darkness and complex magic, one that won over millions of readers. The experience of reading the books plunges you into a medieval universe that seems to stretch well beyond the edges of the maps he’s provided. But until Martin finds a way to complete his series — a huge question mark, given that he’s taken eight years and counting on the next installment of A Song of Ice and Fire — the show has surpassed the books as a more complete and curated vision of Westeros, unhindered by clunky prose, narrative detours and flattened characters. Books are magic. But TV can also take us places we never imagined — and, sometimes, do it with even more style. 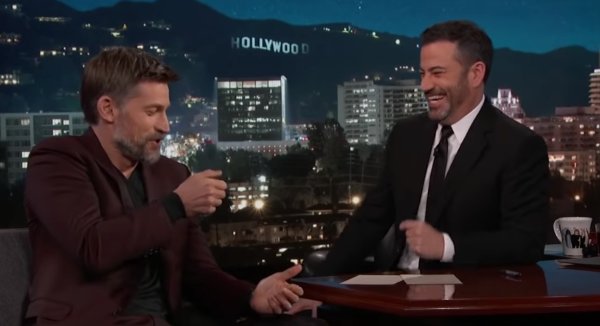 Jamie Lannister Has Plenty to Say About the Most Popular Game of Thrones Theories
Next Up: Editor's Pick